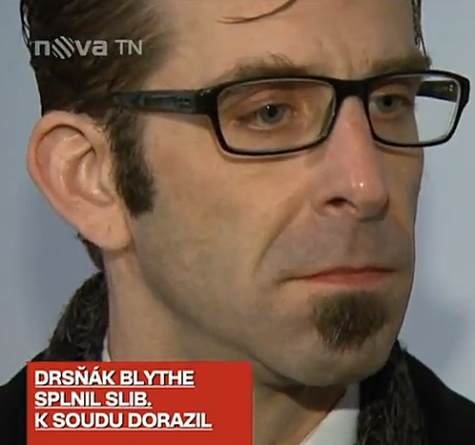 Overdrive is sending out the good vibes to Lamb of God frontman Randy Blythe, who is in the midst of his trial on manslaughter charges in the Czech Republic. Randy has written an open letter to his fans on his Instagram page stating that  many of the media reports on the trial are incorrect, due in large part to the difficult translation of the original reports from Czech into English.

The Lamb of God frontman’s trial began on Monday, Feb. 4, during which time he declared his innocence and criticized the security at the venue where a 19-year-old concertgoer named Daniel allegedly suffered a fatal head injury during a 2010 show. Prosecutors are accusing Blythe of pushing Daniel off the stage during the gig.

In a new post written (Feb. 5) on his Instagram account, Blythe says many of the news reports covering the trial are inaccurate and he also condemns fans for verbally attacking the people of the Czech Republic during this time. His complete letter, which was accompanied by a black and white photo, reads as follows:

I have read a few news reports of the progress of my case, and trust me- many things are incorrect. But this is the Internet, and of course things are half-baked anyway. Keep in mind that translation is difficult, and many things can be lost, for Czech is a VERY DIFFICULT language. So wait and see, as I am. It is all I can do, except be honest & fight for my freedom in my own way. I also have heard of some people (not on here) talking smack about the Czech Republic, saying “F— the Czech Republic”, etc. This not how it should be. This is a very sad case, not something to rage at people you do not know over. I am not angry with the Czechs at all. A fan of my band is dead- what do I have to be angry about? I am an INNOCENT man, but I am also a very sad man right now. To not be sad in this instance would be inhuman. But mad at the Czech people? Why would I be mad at them? Here, look at this picture – a mother watches her baby. The child reaches out for something new, laughing and chasing a pretty picture in the air. It is the same here as everywhere else. Do you see?!?!? Life is beautiful. I hope to see y’all soon.

In an earlier post, Blythe wrote about his surroundings in the city of Prague and how they related to his current case:

Have you ever looked down on the ancient rooftops of Prague from the clock tower in Old Town Square? Have you ever seen the snow falling on the people below? It is a magical sight, for Prague is a magic place. While I am not happy to be here for the reason I am, I am not a blind man, nor am I a fool. Only a blind fool would not bother to see these things. It is quiet high above the city, and it is beautiful in a different way than the many other places I have been around the world. Prague has a long, complicated history. In many ways, I feel what is happening in my life right now could not happen anywhere else. I roam through the streets, asking myself questions, and there are quiet echoes of the city answering back. I have been here over two weeks now, preparing for this trial. I have walked many miles at night here. I am looking for life lessons in the snow.

Earlier today, it was reported although not confirmed, that friends of the deceased concertgoer testified against Blythe, claiming he was “very aggressive during the concert.” The case continues and Overdrive will be keeping a close eye on things to get you the latest on this highly controversial situation.

As reported earlier, Lamb of God are scheduled to headline the Saturday night of the Bloodstock Festival which will take place on August 11th. The band are waiting for the out come of this case before any changes are made to the already booked dates for the summer festival run.