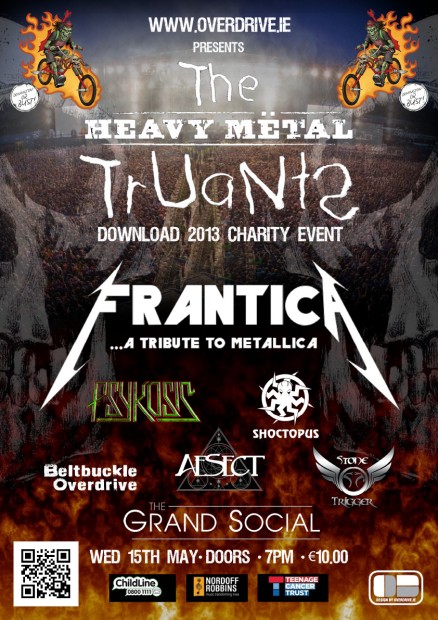 Iron Maiden’s Manager, Rod Smallwood and Metal Hammer editor Alexander Milas are the brain child’s behind “Heavy Metal Truants” which is a charity bike ride from London to the Download Festival to raise much needed money for a range of charities. The Truants will consist of a collection of artists & infamous music biz folks who will all be doing their bit to raise some funding for Nordoff Robbins, Teenage Cancer Trust and Childline.

In association with Geoff Smith of UMG International, Overdrive invite you to a fundraising night of blistering Hard Rock and Metal with a fantastic line up that consists of AeSect, Stone Trigger, Beltbuckle Overdrive, Shoctopus, Psykosis and Metallica tribute act FRANTICA. All proceeds from the event will be donated towards the charity’s listed above.

Smith, “I’ve known Oran at Overdrive for over 20 years & I’m really pleased to be able to help sponsor his event with the support of Universal Music. These events will raise cash for these really important charities that help kids who really need it.”

If you’d like to help, please join us at The Grand Social in Dublin on May 15th.
With plenty of spot prices to be won and a spectacular line up of local Irish Hard Rocking, Face Melting bands there is no reason why you should not be down the front in the pit!!!

Look forward to seeing you there! M/

LINE UP –
FRANTICA a tribute to Metallica have been regular headliners on the Irish metal tribute scene for the past seven years. Based in Dublin, they regularly play to packed houses in venues such as Fibber Magee’s, and have also been very well received all over the island in venues from Cork to Belfast. Now in their fourth incarnation with new bassist Joey, who made his debut at Belfast’s Empire Music Hall in October 2012, founding members Karl (drums) and Mark (vocals), along with guitarists Kevin and Bob, strive to reproduce Metallica’s face-melting live sound as accurately as possible, whenever possible!

PSYKOSIS are from South Dublin and they just like to party, have a good time and play kick ass tunes for thrash maniacs!! Nothing more nothing less. The guys have a demo out at the moment called “Toxic TerrorStorm” and are in the middle of writing for debut self released album. Last year saw the band open for Sacred Reich and DRI to mention a few so get in teh pit, you wont be dissapointed.!!!

The album has garnered an impressive 9/10 from the Irish music magazine Hot Press, and Crimson Moon and Pagan Hel have both given the album an unprecedented 10/10.

The band, consisting of Charlie Black, or Cha Bla, on vocals, Stavis on guitars and Chairman Mao on drums, have built up a solid fan base after five years of touring Ireland, and their electrifying live performances are well renowned.
Connect with Shoctopus – www.shoctopus.com

STONE TRIGGER – Having only formed in mid-2011 the Trigger boys have kicked the Irish Hard Rock scene in the balls with staggering live shows and impressive self written anthems just packed with swagger and broken glass! The guys due to support LA Sleaze crew “Faster Pussycat” later in the year and have a new album in the works, so catch em’ while you can.
Connect with Stone Trigger – http://stonetrigger.com/

AeSect – A blistering five piece metal band based in Dublin. ”Buried in the Undergrowth”, their debut EP was released for free download in early February to high praise. The band has created a following through intense live shows and looks to take to the road to increase its fan base in the near future. Recent support slots for Decapitated and Xerath have shown that the band can handle themselves with some of the best.

BELTBUCKLE OVERDRIVE – were formed in early 2011 and
made there live debut opening last summers Thunderfest. Since then the guys have been setting Dublin’s rock venues ablaze with there live show. Early 2012 saw the release of there hard rocking debut E.P.”Chompers” The ‘Wacken Metal Battle Ireland’ was the next big notch on the Beltbuckle as BBOD finished in joint second place in their bid to play the Wacken festival in Germany, garnering reviews like”Beltbuckle Overdrive are a live force to be reckoned with” from
‘Molten Magazine’.