A headlining show at New York City’s Highline Ballroom by ex-Metallica bassist Jason Newsted’s new solo project (Newsted) turned tense for a moment Tuesday evening. Newsted’s band was halfway through a rendition of Metallica’s “Whiplash” when a fan leapt onstage, appeared to attempt a stage dive into the middle of the audience and instead ran into Newsted from behind, knocking them both off the stage and into the audience. With the crowd stopping the fan in the mosh pit while others yelled at him, a security guard immediately escorted the fan from the venue with one forearm wrapped around his neck, pursued by other members of the venue’s security detail.

Visibly disoriented from a roughly five-foot fall that could have caused serious damage with a slightly different angle, Newsted returned to the stage with the help of security, replacing an in-ear monitor knocked out by the fall and addressing the crowd:

“You know, no matter how many shows I’ve done, that just happened for the first time. …I trust my brothers here to take care of it. Anyone get a good look at that motherfucker? Don’t kill him, just bruise him up a bit.”

Newsted said this last part with just the right amount of good humor, but the fall itself was a bone-chilling moment that luckily didn’t end in serious injury. It immediately brought Randy Blythe’s “be carefully” statement against stage diving to mind, putting the crowd on edge at a time where metal crowd behavior is freshly in the public eye. The knock out is also a tad concerning considering Newsted’s 2006 shoulder injury (which left him inactive in the music scene for over a year). While details are still developing, Newsted appears to be doing ok following Tuesday night’s incident.

Newstead will perform at this years Download Festival which takes place on Friday 14th-16th of June at Castle Donnington, England. The band are expected to take to the Pepsi Max stage on Sunday 16th from 18.05 to 18.35. 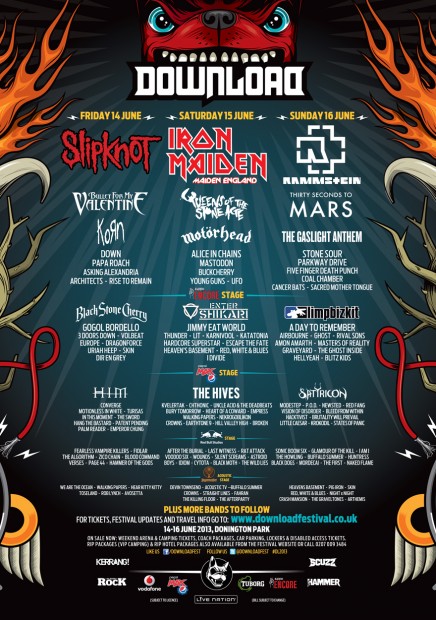