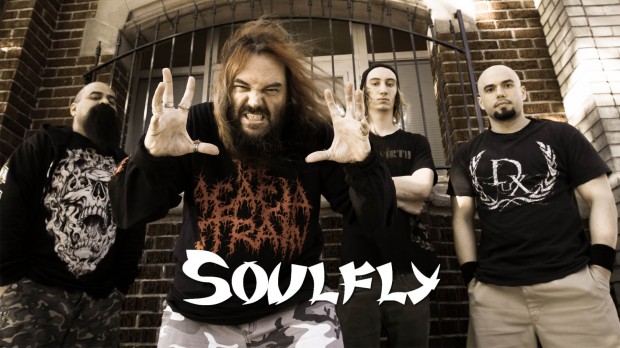 SOULFLY’s ninth album, “Savages”, will be released on October 4 via the band’s new label home, Nuclear Blast Entertainment. The CD was produced by Terry Date, who is known for his work with such acts as PANTERA, DEFTONES and SOUNDGARDEN, among many others. Guest vocal appearances on “Savages” include SOULFLY bass player Tony Campos, frontman Max Cavalera’s son Igor Cavalera (LODY KONG), CLUTCH’s Neil Fallon, NAPALM DEATH’s Mitch Harris and Jamie Hanks of I DECLARE WAR.

“Savages” will be released as a limited-edition digpack CD, 2LP vinyl and digital download.

The cover artwork for “Savages” was created by renowned artist Paul Stottler, who is best known for his work on SACRED REICH’s legendary “Surf Nicaragua” cover.
Date previously mixed SOULFLY’s “3” (2002), “Prophecy” (2004) and “Dark Ages” (2005) albums, but had never produced any of the group’s CDs.

The drum tracks on the new SOULFLY CD were laid down by Max’s 21-year-old son, Zyon Cavalera, who joined the band as its touring drummer for its recent rampage through North America.Zyon previously played with SOULFLY during the band’s tour of Brazil in February 2012.

It is Zyon’s unborn heartbeat that can be heard during the intro of SEPULTURA’s classic song “Refuse/Resist”, which appeared on the band’s RIAA-gold-certified “Chaos A.D.” album, released three years before Max’s departure from the group.

Commented Max Cavalera: “Recording ‘Savages’ was an amazing experience for me. I was so excited to work with Terry Date, whom I consider to be one of the best producers of all time. He has done some great records and we have been in contact for awhile since he mixed three SOULFLY albums in the past. He came to see SOULFLY whenever we played in Seattle, and we finally made it work that he would be the producer for ‘Savages’.

“My teammates were awesome. Marc [Rizzo, guitar] did some crazy guitar noises and we did a ‘Mars Part Two’ at the end of ‘El Comegente’; it’s very LED ZEPPELIN-influenced and Marc kicked some ass on it. “I wrote ‘El Comegente’ with Tony Campos. It’s in Portuguese and Spanish and it’s about Vargas — a Venezuelan cannibal from the ’80s. He is the Hannibal Lecter of the Andes. Crazy shit!

“I worked for the first time on a full album with my son, Zyon. Before recording the album I first worked closely at home with him in preproduction, and it was great to spend weeks on the songs with Zyon, shaping the sound of the record.

“Zyon did a great job and he hits really hard just like his uncle Igor. “It was amazing recording with my son. A whole record! A dream come true for a father whose life is dedicated to metal. ‘Savages’ is a celebration of all that.”

Igor Cavalera (LODY KONG): “I was super pumped when I got the call to add vocals to ‘Bloodshed’. It’s badass that Nuclear Blast chose it as the first single.”

Jamie Hanks (I DECLARE WAR): “It was pretty incredible working with heavy metal legends like Max and all of SOULFLY.”

Neil Fallon (CLUTCH): “I am stoked to have been asked by Max to participate on the ‘Ayatollah Of Rock ‘N’ Rolla’ track!

“Max brought CLUTCH out on some of our earliest and most formative tours and this brought back some very fond memories of singing with Max all those years ago.”

Mitch Harris (NAPALM DEATH): “It was an honor for me to finally collaborate on a song with Max and Co. It’s something we’ve been talking about for the last 9 years.

“I’ve always felt like part of the Cavalera extended family, and for me it was a truly uplifting, comforting and memorable experience after say 26 years or so. We ran through all the takes together, trying to capture the carnal energy, the push and pull between force and action. Friction, charisma, and something true directing the sole intent of the message, that was my general angle on it.

“Art and expression are about capturing the moment, the essence of a connection between like-minded souls, expanding on concise ideas that start small and end up big.”

Tony Campos (SOULFLY): “Getting to share vocals with Max on ‘El Comegente’ was great. The song was coming along so quick, I pretty much wrote lyrics for that on the spot. I showed Max a couple of different things and used the stuff he thought was cool and made him laugh.” 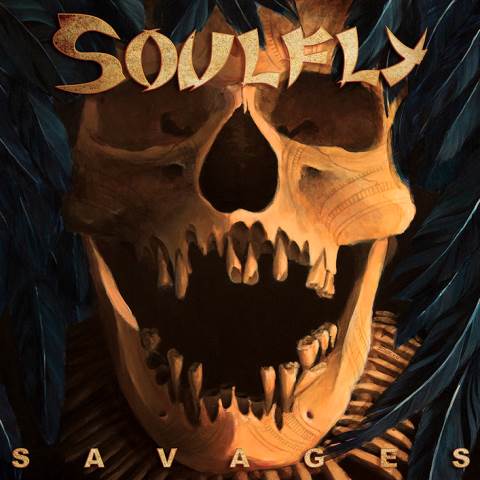