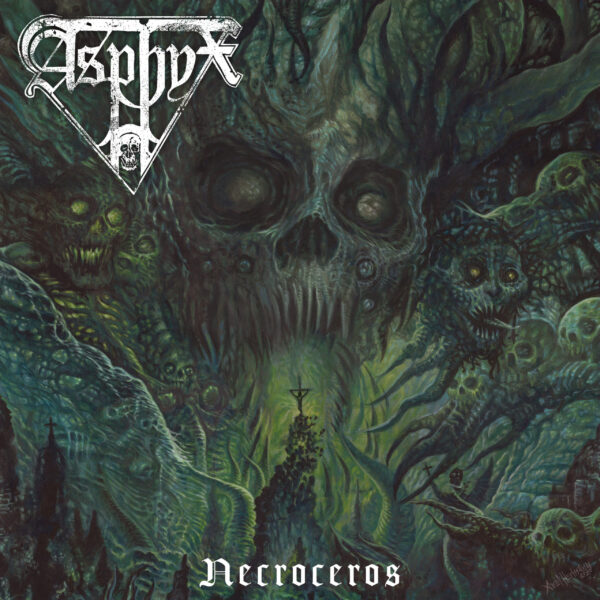 No strangers to trouble, the band have endured more line-up changes than album releases over its 30+ year history.

But Martin Van Drunin and co. have savoured in settling into some much-needed line-up stability lately, and it pays dividends on their 10th release, Necroceros.

Kicking things off with ‘The Sole Cure is Death’, the band launch into some good ol’ meat and potatoes death metal riffage.

There are multiple tempo shifts to take in, and it’s a decent taste of what the album offers as a whole. The production, managed jointly by Tom Meier and Paul Baayens, succeed in delivering some satisfyingly menacing tones to the album. Nothing ever sounds too neat and tidy.

Across the albums 10 tracks the band kick up a racket that feels dirtier than a well-used butcher’s apron, and those guitars are sharp as meat cleavers to boot. It gives the whole record a nasty pulse that should turn a few heads.

Around the middle of the album, we’re treated to a few epic cuts. ‘Knights Templar Stand’ delivers some great moments straight from the book of ‘Bolt Thrower’. There’s a solid mid-tempo groove that crushes its way forward. It’s hard not to get into it. ‘Three Years of Famine’ is another stand out track.

It leads off with some of their best doom dirtiness, before surprisingly transitioning into epic moments that recall some of ‘Metallica’s best.

Asphyx also belts out surprises when they drive up the tempo. The occasional manic outbursts inject serious urgency into the music, and it’s in these sections that the band sound at their most exciting. On ‘Botox Implosion’ they really fly off the handle, and as a result, it’s just as fun a frenzy as its name suggests.

As good as its best songs are, ‘Necroceros’ unfortunately has a fair share of duller moments too. Some of the tracks feel like the band are operating on autopilot, it can get very formulaic at times and plod along without really doing much to catch any attention. It’s a shame because the finer moments on this album stand up with some of the bands best ever material.

‘Necroceros’ hits devastatingly hard when the band are on their best form, but once in a while it also feels like they pull their punches. It can be a bit of a mixed bag, but the ferocious peaks are well worth the occasional rough spots.  6/10

You can pick up the album from this link as well as all popular streaming platforms.