Man the sails! Hard to port! Avast, ye landlubbers!! Hoist the Jolly Roger! Cannons at the ready!! Clasp yer booty to yer chest lest it be torn from ye and yer forced to walk the plank! Next for ye is a drop to Davy Jones’ locker! Arrrrrr!!! 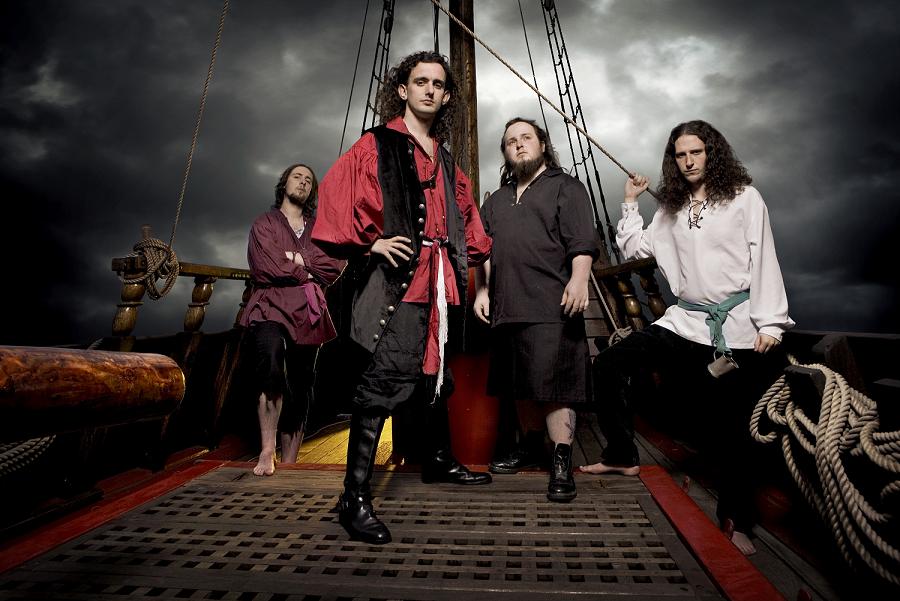 Docking into Dublin’s Voodoo lounge were the crews of pirate gear-clad metalheads ranging from the old to the young. It’s admirable to see that the youth of today still appreciate a decent comedy-metal hooley. Seeing as how it was a school night as well, the admiration is intensified. A “piratefest” of sorts hit the venue, starting with RainbowDragonEyes, a one-man show with an 8-bit sampler.

This guy performed like there was a full band behind him, and he gave it socks! He ran from one end of the stage to the next, enticing “an 8-bit circle pit” to form from the growing crowd. Despite who he was trying to please, not a single fuck was given on that night. Everyone loved him and they reciprocated by indulging his orders to ‘DESTROY THE DECKS!”. Next up was “Red Rum” from England. The energy that these lads have when singing about rum, wenches, sailing and general no-goodery, is inspiring. There’s also homage to “Lord of the Rings”. There’s a song they sing about “taking the hobbits to Isengard, where’s Gandalf? I must see him! A Balrog of Morgoth! What did you say?!” The grins of the nerds were very apparent.

Following them is “Lagerstein” from Australia. Their bassist is a monstrous man – dwarfing everyone on stage – including the security. They appear on stage equipped with beer bongs and a slab of beer. I know where this is going. This is gonna get messy. The first song isn’t even halfway done, when the lads introduce themselves by having the guitarists endure a “Boot-off”. This merry encounter is composed of each man filling his boot with beer (or “ale”, as it is widely unacceptable at this event to label any beverage in anything other than pirate speak), and necking it. Jesus the smell must be awful! The highlight of their performance was recruiting a roadie to play bass whilst the “Giant” sings the much-loved “Lonely Island” anthem “I’m On A Boat!” I find myself singing along too. But hey – it’s a gig! So why not enjoy yourself! As a nice ending to the their gig, RainbowDragonEyes pops up out of nowhere and fills the beer bongs repeatedly with about 10 ales continuously, and we watch the band guzzle pint after pint. We’re warned not to leave or we’ll be “fed to the sharks ARRRRRRR!!!!!!!” 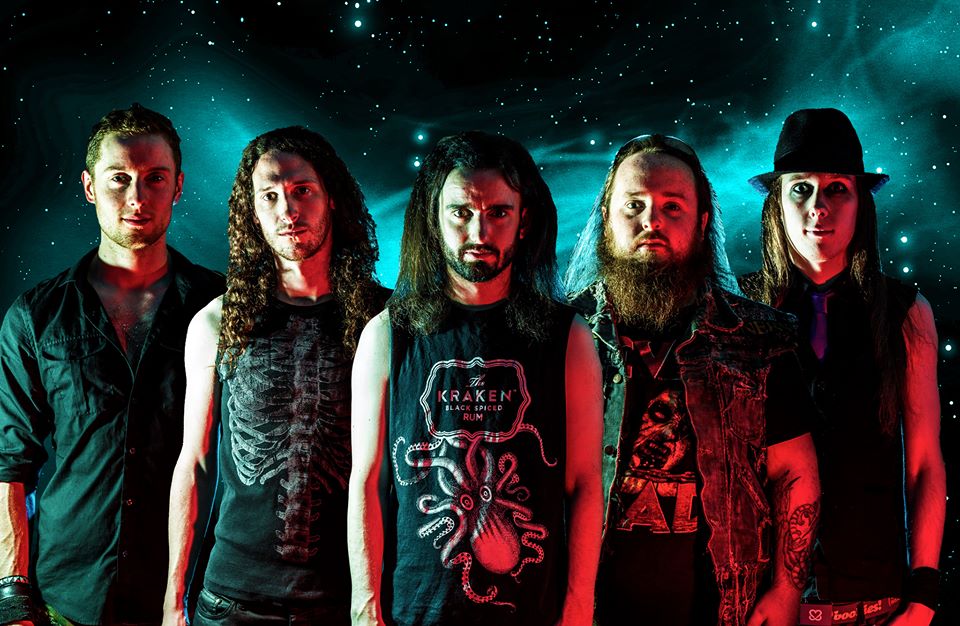 Lastly, the Captains of this motley crew land ashore, with screams of “Yeearrrrrrrr!” and pirate hooks aplenty. The first order we are given, is to “Walk the Plank!” (Sunset on the Golden Age). You don’t expect the intro to be quite so heavy. Voodoo lounge isn’t that big…. Its only about 30-40 feet wide, but frontman Christopher Bowes (vocals, keytar, and sporting a LEGO ALESTORM SHRT!!!!), whips the circlepit into a whirlpool of bodies that engulf the entire room. You can’t help but smile…. there is nothing but good vibes from everyone here as everyone just kicks back and loses their shit, enjoying that boyhood dream all young lads have of being pirates. There’s a lot of “Yo-ho-ho-ing”, as “The Sunk’n Norweigan” (Back Through Time), appears, and Bowes tells us that Alestorm are here to drink our beer! That is when mayhem is released, much like a Kraken! I think the bar experienced a rush for a bit, as everyone wanted to raise their glass at the same time as the instructions to “DRINK!” (Sunset on the Golden Age), echo throughout the venue (ah here – sure, I might as well!!).

Guitarist/shredder/nautical ruffian Dan Evans rips solos out of his weapon like the best of the best. An excellent musician, and not one to shy away from shenanigans during “Shipwrecked” (Back Through Time). Drummer Peter Alcorn mans the skins and pounds the drums like a hearty storm on the seven seas. The tone is lowered for “Magnetic North” (Sunset on the Golden Age), and “Back Through Time” (Back Through Time), before keyboardist Elliot Vernon serenades Bowes into lamentations of heartache at the hands of a frisky filly, in “Nancy the Tavern Wench” (Captain Morgan’s Revenge).

To-ing and fro-ing and clashing of ales between strangers unite the seaworthy brotherhood in tales of women who’ve long since parted ways with their newly-christened men of the sea. A fine spectacle indeed! Scurvy dogs and scoundrels join arms and jump so much during “Midget Saw” (from the album Back Through Time, and a small puppet-monkey called Ronan Keating joins the band onstage), that at one point I feel the floor was going to give way. The ground is literally trembling, and I expected a sinkhole to develop and swallow us all. “Keelhauled” and “Pirate Song” (Black Sails at Midnight), threaten to test that theory with the surf that brewed….and when I mean surf, I mean bodies. There are a few members of the previous bands enjoying a few larks too. Heather Mills has a dedication put out to her, with “Wooden Leg” (Sunset on the Golden Age), one of Alestorm’s more widely known swashbuckling tunes, being belted out. Bowes solidly looks like he’s having an epileptic fit on stage. It seems that their run of promoting their last album has paid its dividends, as everyone here knows the songs on it.

As “Wenches and Mead” (Captain Morgan’s Revenge), restarts the engulfing whirlpool again, bassist Gareth Murdock piles into it. You can’t really argue with him – it’s been nothing but fun since the doors of the venue opened. We are brought to the final act, where the band deploy some futuristic, high-tech, military-grade, virtual camouflage to disappear before the crowd… actually that’s a lie. They just hide under black sheets and turn the lights down. They just have nowhere to run backstage. Cue the intro to “1741 – the Battle of Cartegna (Captain Morgan’s Revenge). The band miraculously appears before us again, and the show goes on, and so do the antics of drunken piracy. When they play “Hungover”, from Sunset of the Golden Age, is dedicated to everyone who was out last night. They are joined by the leviathan bassist and dwarfed guitarist from Lagerstein for this rendition. “Captain Morgans Revenge” (from the aptly titled Captain Morgan’s Revenge), carries us into “Rum” (Back Through Time), and Bowes finally admits defeat, and surfs the whole way from the stage to the bar. I actually found myself carrying him on my shoulders alone and planking him in front of the barman.

All in all, this was one of the most fun concerts I’ve seen. There were no signs of anyone having too much ale and getting rowdy, not a sight of anyone fighting, despite the songs that were sung about ale, rum, fights, women, booty, plunder and general thuggery that went hand in hand with this ancient way of life. My hats off to the bands tonight – they made a lot of dreams come true. What better way to enjoy a gig, than banging your head with a beer in one hand and your other arm over your first mate’s shoulder? 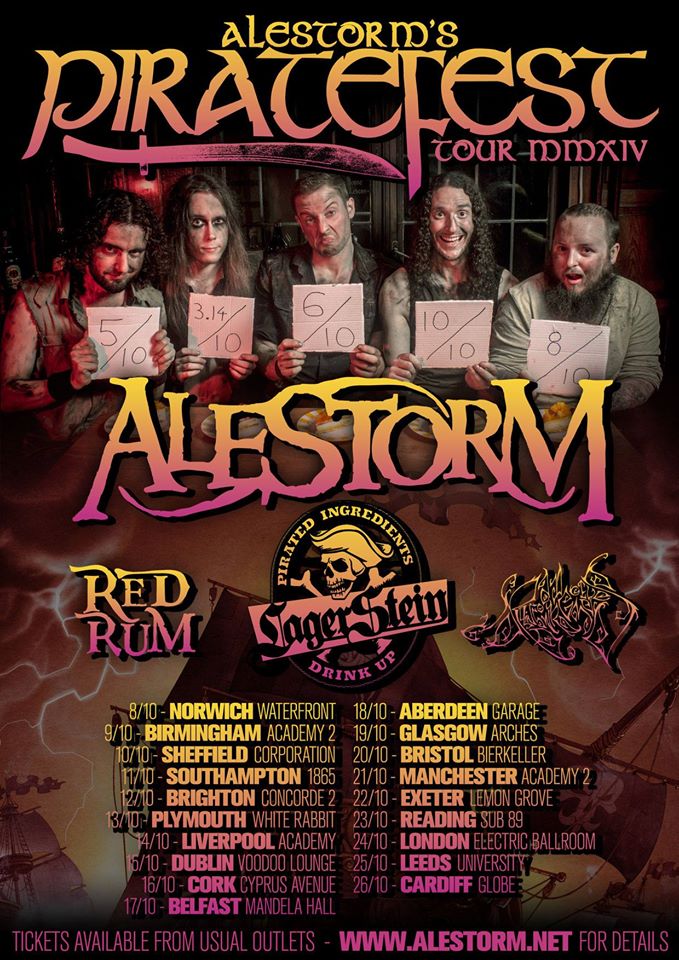