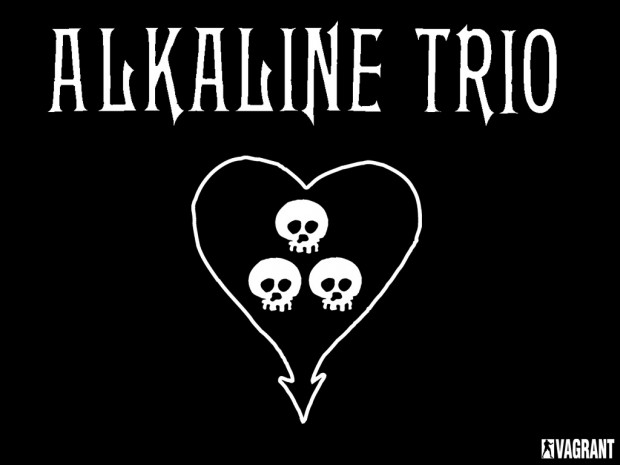 Overdrive can confirm that Alkaline Trio will be taking the stage at Dublin’s Academy on Monday 26th August.

Cult punk rock heroes, Alkaline Trio return released their latest ‘My Shame Is True’ in April 2013, one of their most dynamic albums to date. Recorded with Bill Stevenson of punk legends The Descendents and Black Flag and with Jason Livermore at the producers’ Blasting Room Studios in Colorado, My Shame Is True pushes the band into new musical terrain while embracing their classic Trio sound. The album contains 40 minutes of passionate punk-filled rock that showcases guitarist/vocalist Matt Skiba, bassist/vocalist Dan Andriano and drummer Derek Grant at their absolute best. “We’re very proud of it,” says Matt Skiba. “Once we got in the studio, the songs really took on a shape of their own.”

Check out their first single ‘I Wanna Be A Warhol’ below.

From the album’s first melodic opener “She Lied To The FBI” to the first single, “ I Wanna Be A Warhol” the Trio waste no time setting the tone for their energetic, hook-filled, eighth studio album. For the first time ever on an Alkaline Trio record, My Shame Is True finds a guest appearance from Rise Against’s Tim Mcllarth on rousing punk rock anthem, “I , Pessimist”, while songs like “I’m Only Here to Disappoint” and album closer, “Till Death Do Is Part” remind fans of classic Trio, with stellar song-writing and catchy choruses.

With multiple world tours, numerous chart successes, and over fifteen years under their belt, the dark punk trio have cemented their legacy with My Shame Is True.

“It’s never been about being rich or famous,” continues Skiba. “We always wanted to have the band be our career… to have that longevity… that should be the goal. We are going to do it until it stops being fun. If it ever feels like a job, why would you be involved in the arts at all? We have the right chemistry as a band and with crowds, big or small. We have community within a community.”

Alkaline Trio first emerged from Chicago in 1996 and has since released eight full length studio albums Goddamnit, Maybe I’ll Catch Fire, From Here To Infirmary, Good Mourning, Crimson, Agony & Irony , 2010’s This Addiction which reached #11 on Billboard 200 and Damnesia, which features a selection of beloved fan favorites selected from the group’s extensive catalogue and presented in an intimate-semi unplugged format.

Tickets €24 including booking fee are available this Friday 24th May at 9am from all Ticketmaster outlets and www.ticketmaster.ie