Alter Bridge return to Ireland for a sold-out performance in the capital’s iconic Olympia Theatre and Overdrive was there to capture every last riff that found its way from the venues PA. 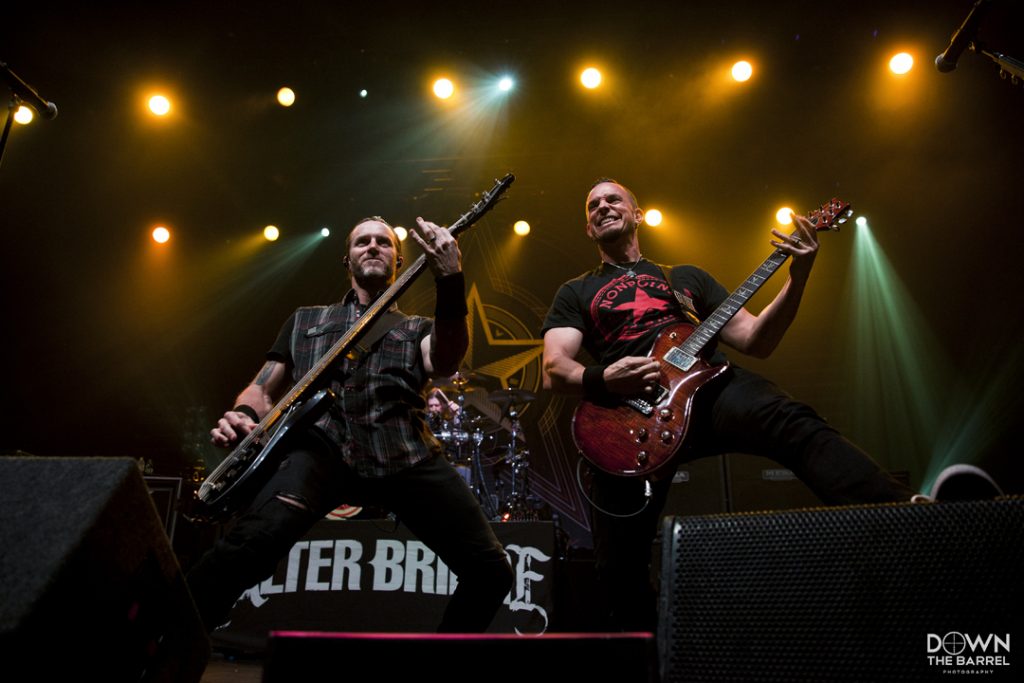 Opening for Alter Bridge on this tour is As Lions. The London five-piece was formed from the ashes of Rise to Remain and features three members of that band. Their hard rock sound is a real departure from Rise to Remain’s metalcore leanings and affords singer Austin Dickinson far more of an opportunity to show off the melodic power of his voice.

As Lions are far superior from some support acts in the way they put on a complete performance.  They are energetic, confident, interesting to watch as well as listen to and very polished. 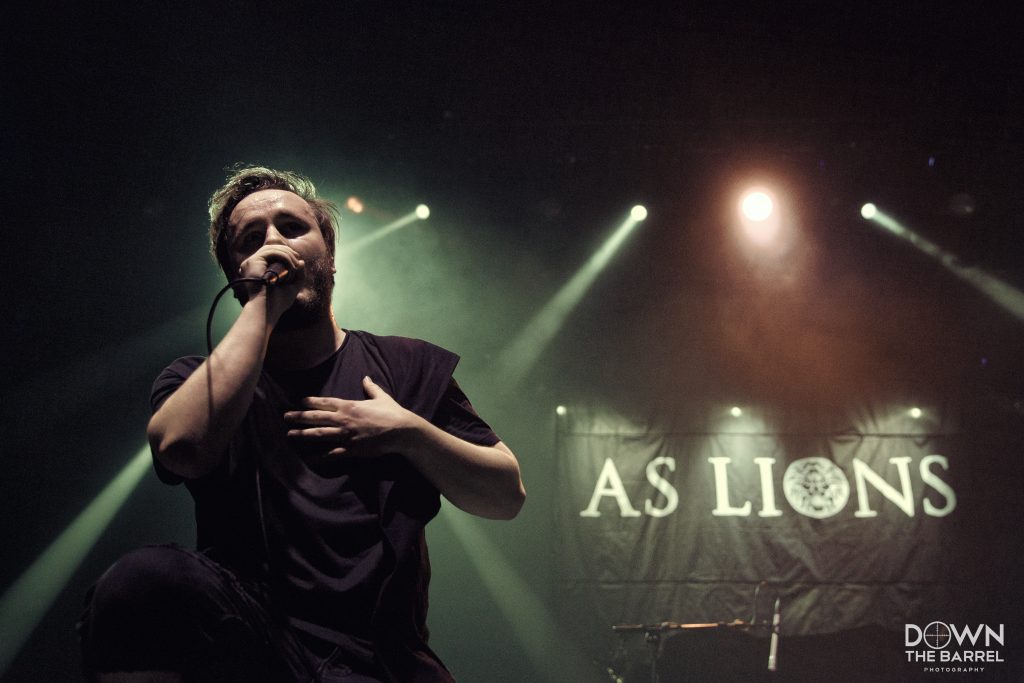 Their stage presence and crowd interaction has matured from their early days in Rise to Remain as Austin takes the audience in his hand and compels them to take note.
As Austin put it to the crowd if you don’t do well at your job your boss will sack you.

In this case, the crowd is the boss and if the band don’t do their job they’ll be given short shrift.  No such treatment is necessary because the crowd react very positively and I heard nothing but good comments about them.  The setlist is made up of tracks from their debut album Selfish Age, which is bound to be worth a listen on the back of this performance.  Stand out songs for me are Bury My Dead, World on Fire and The Great Escape, but it is the overall performance value that really sells the band.  Definitely a lot of potential for the future. 3.5/5 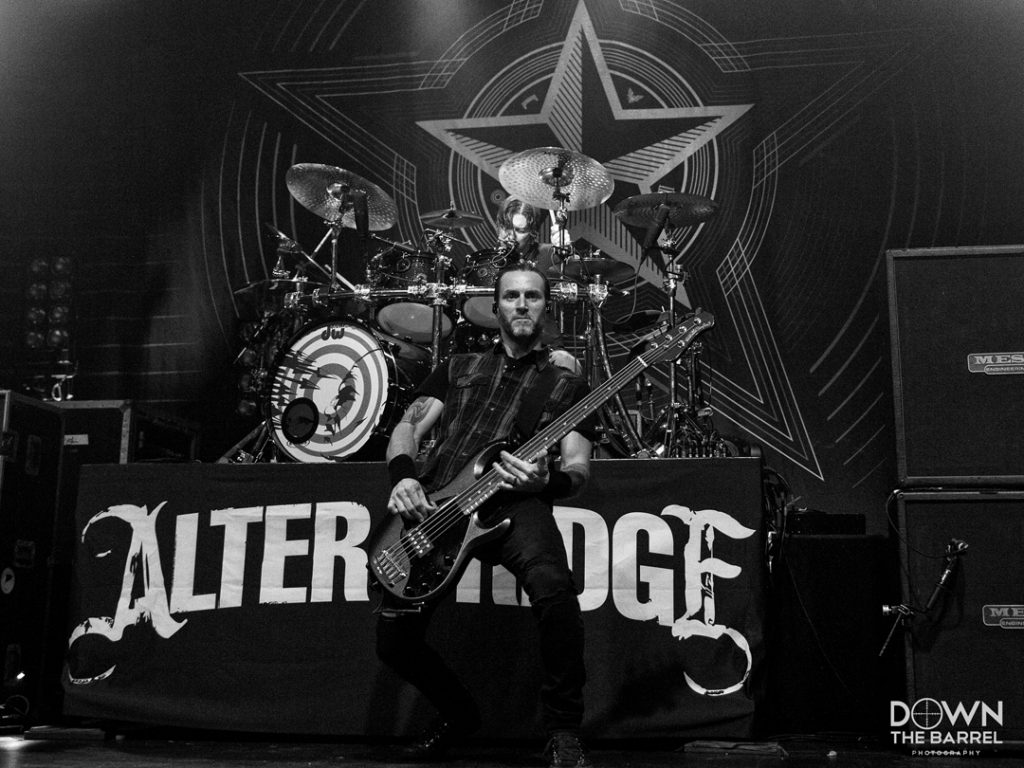 It’s only four short months since Alter Bridge sold out the Olympia Theatre, so you could be forgiven for thinking people wouldn’t be bothered coming out to see them again so soon.  You’d be completely wrong as the gig sold out and by the time the band is due on stage it is packed to the rafters.

The beautiful private boxes have some very special guests as the band have flown over their families for this gig, including Myles Kennedy’s parents, his father visiting the ‘homeland.’ He must have almost burst with pride at the way the Irish crowd reacts to his son. I don’t know if the band put an extra ten percent into the performance because of their families watching but there seems to be something special in the air. 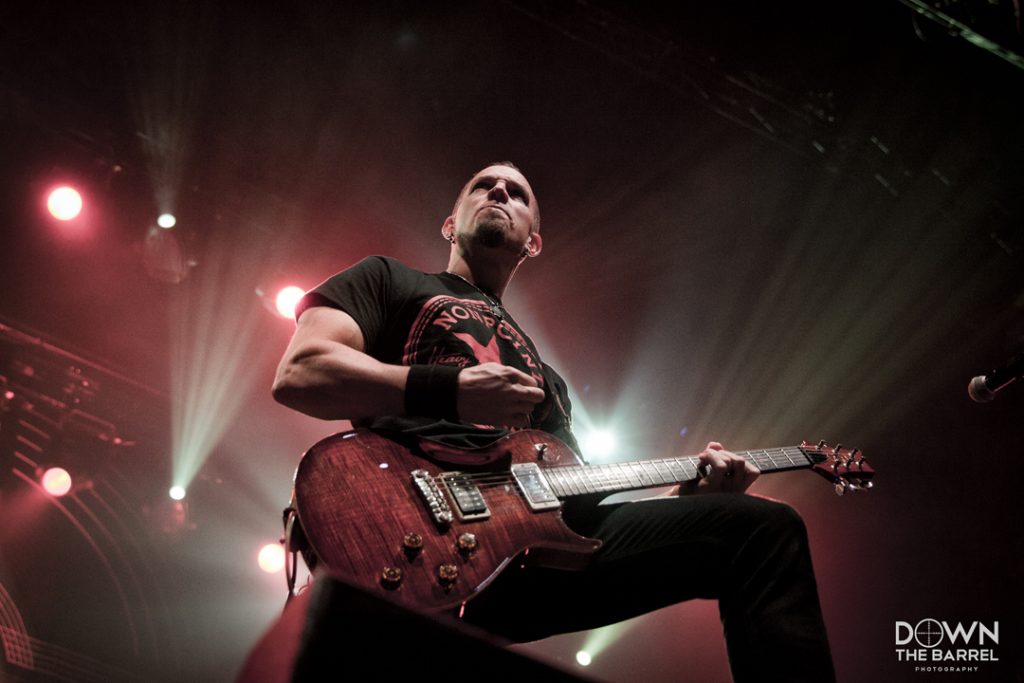 I said in June that their show would have been the gig of the year if I hadn’t just seen Guns n Roses but this show seems to top even that performance. They open with Farther than the Sun from the Fortress album and the crowd is ready to go from the very opening note.  Before that, actually, as the Al-ter-Bridge, Al-ter-Bridge chant echoes through the theatre before the band even arrived on stage.

On the back of sold-out performances with a full orchestra at the Royal Albert Hall it has to be said that Alter Bridge are probably at the peak of their career so far. It’s rare to see a show that doesn’t lull at some point but there literally isn’t a second in this almost two-hour performance where the level dips even a little. Before Tomorrow Comes and Ghost of Days Gone By ramp things up and by the time they reach Addicted to Pain it’s clear this is going to be another special night. 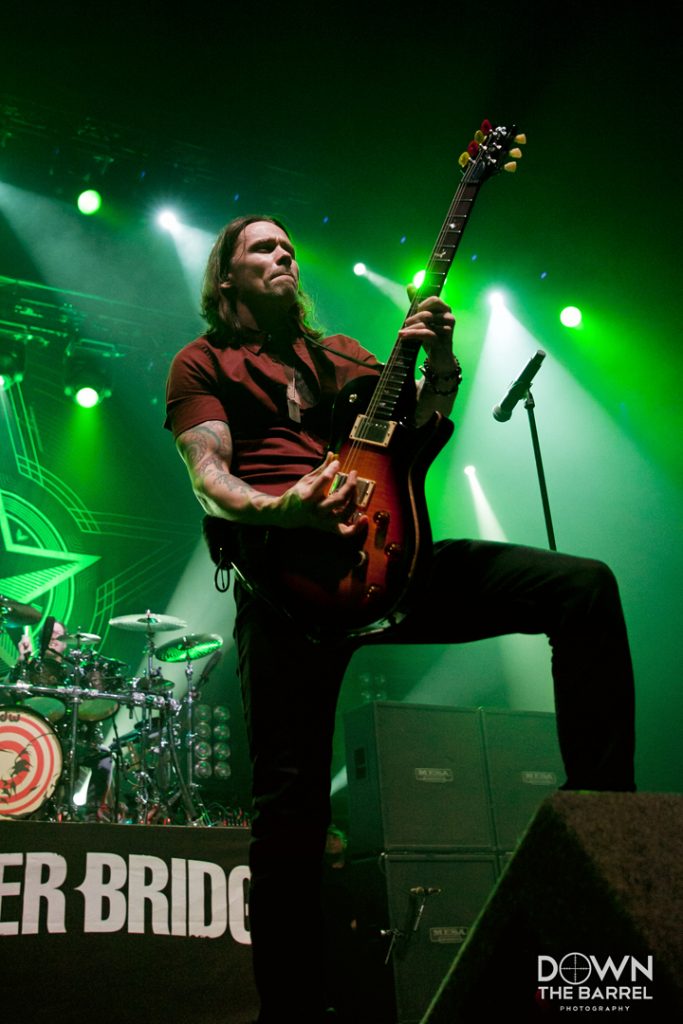 Bassist Brian Marshall is prowling the stage like a panther, joining up with Mark Tremonti to strike some poses. Scott Phillips on drums is high on his riser and with his own spotlight, it’s a great opportunity to actually see a drummer at work, as they are so often hidden in the background. As always, Myles Kennedy is front and centre, and one of the most distinctive voices in rock is on top form.

Cry of Achilles and Isolation bring the crowd to fever point. Myles asks who in the crowd was at the June show and looks genuinely touched that so many people are back again so soon. After welcoming the people who weren’t there before into the AB family they play a song that is a complete rarity on the tour. They haven’t played Burn it Down, (from 2004 album One Day Remains) in years. Drummer Scott estimates ten years when Myles asks him, so it’s definitely one most of us won’t have heard live before and while everyone enjoys hearing the classics it’s also a real treat to hear something different as well.

Waters Rising gives Tremonti the chance to take lead vocal before Myles swaps to acoustic guitar for Watch Over You. He dedicates it to his parents, saying he’s playing something a bit quieter because he knows the show is noisy and they aren’t used to it. His performance gets him a standing ovation from his dad while his mum looks at the roaring crowd as if to say, “that’s my boy.”

The whole band returns to the stage for Ties that Bind before probably Alter Bridge’s most popular song, Blackbird.  The crowd sings every word, raising along with Myles beautiful vocal right up to the roof of the Olympia and it’s a very special moment indeed. It’s followed by Open Your Eyes and Metalingus, where the first pieces of organised crowd participation take place. 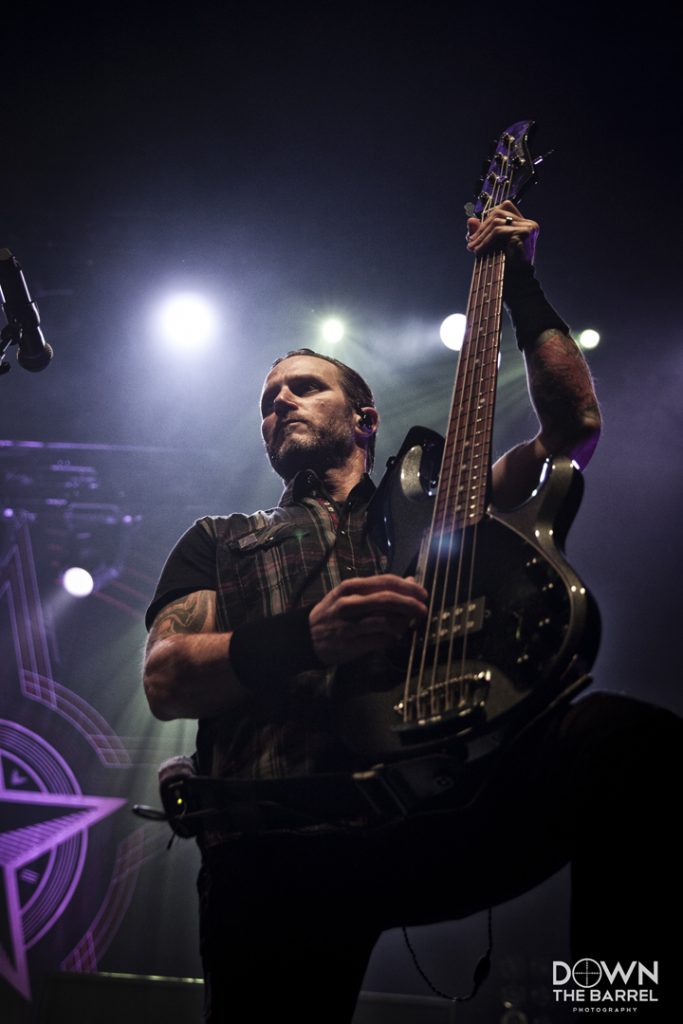 On Open Your Eyes the crowd’s vocals are tested with some enthusiastic whoa-oh-oh’s as the whole place is flooded in light and sound. On Metalingus Myles has the whole standing section of the crowd crouch down, winking at his parents, telling them, “watch this.” As he counts them in the whole crowd jumps into the air as one, becoming a heaving mass of bodies jumping and waving and generally going absolutely bonkers.  The main show finishes with Show Me a Leader, and the band leave the stage to cheers and roars that soon coalesce into a chant of ole, ole, ole.

The encore begins with a rendition of In Loving Memory that would bring a tear to a glass eye. It’s followed by a few minutes of duelling guitar solos between Myles and Tremonti that show off just how good the pair of them are. Slash is on record as saying that he learns a lot from Myles.

It’s easy to see him as the singer and forget that he is also one of the best guitarists around. If Slash reckons he’s one of the best, that’s good enough for me. The show finishes with Rise Today, before the band spend a few minutes handing out souvenirs and taking selfies with the crowd and have their photo taken. I honestly thought nothing could top their performance here in June but this show might have just pipped it. Alter Bridge are a band at the absolute top of their game and two sold-out crowds in the same venue only four months apart goes to show they are welcome in Dublin any time they like. 5/5