Some people leave gigs saying ‘wow’, some even class it as ‘the best gig EVER’ but Anathema has truly taken performing music to the next level. Playing a sold out gig in Dublin’s Button Factory on the 19th of September there was no better place to take shelter from the storm outside. 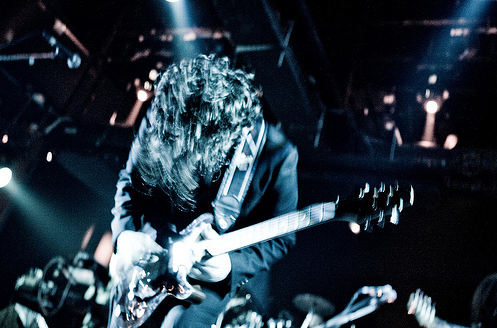 From the drummer walking out on stage and calmly sitting down at his full kit behind Perspex, to Vincent joining the band last on stage, running out in his leather jacket, there is tension and suspense among the audience as what to expect.

Their opening song The Lost Song Part One off their new album ‘Distant Satellites’ gets the crowd cheering and clapping to the beat while all the members of Anathema seem to be relaxed and happy to be present. The lead into part two of The Lost Song has people mesmerised as Daniel Cavanagh plays beautiful keyboard and Lee creates superb vocals while the crowd join in.

It is clear that Anathema (the track) off ‘Distant Satellites’ is close to Vincent as he is seen to sing with his eyes closed and truly rock out for the whole performance. This is directly mirrored by the crowd who raise their hands, sing along and show raw emotion also. A highlight of the gig for me would be this song where you could hear members of the audience exclaiming “Fucking Hell!” during the guitar solo from Daniel. Singing songs off their new album and older albums, like Fragile Dreams from Hindsight, the audience gets their money’s worth as the band is still as young and intense as ever.

Talk is kept to a minimum between the band and the crowd and it suits the setting perfectly. This is a band that people came to listen to and not to have a dialogue with. Vincent and brother Daniel converse occasionally with the audience to thank them for their support and such. The crowd is coaxed into watching the gig and not viewing through the screen on their phones. The setting is surreal with the lighting low and songs leading into one another perfectly.

Throughout the whole gig the band constantly change instruments with John and Daniel Cardoso swapping drumming capabilities, Lee disappearing for half an hour while Vincent takes over all vocals and Daniel playing keyboards for a few songs also. We even see guitarist Daniel using a violin bow to bow his guitar through Take Shelter. This band is full of talented musicians and it truly shows that too many Cooks do not necessary spoil the broth.

Personally You’re Not Alone is my favorite song but for the band Distant Satellites, the track, seems to be favored as brothers Daniel and Jamie both air drum along during the ‘bridge’ and the band really seem to enjoy themselves.

The band had so much fun rocking out that during the encore Vincent dimmed the lights and is even nice enough to take a camera off one of the photographers to take a picture of the amazing crowd that populated the sold out gig.