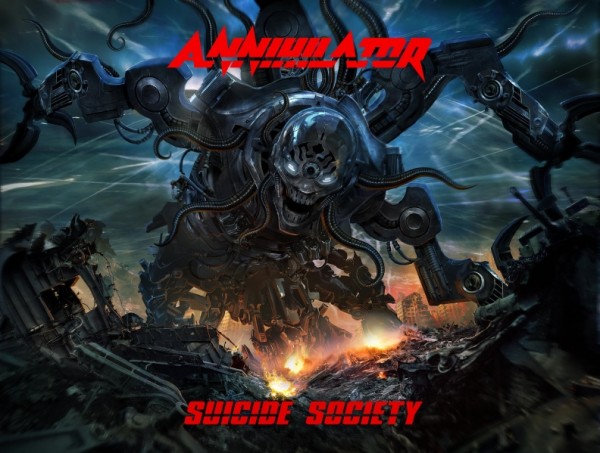 This being the bands 15th studio album, one can only appreciate the duration in which Jeff Waters and his Annihilator colleagues, have been damaging necks across the globe and with the punishing previous album Feast, still making regular rotations on the Overdrive turntable, we were patiently waiting for this years sonic assault Suicide Society to finally drop into our hands. So sit back and let’s get stuck in!

Starting with a vocal call to arms “A suicide society, we’ve all gone bloody mad”, we are treated to a slow paced opening, with the title track from the album, which gathers momentum and delivers that familiar  knocking Annihilator blow. Packed full of guitar wizardry, Jeff Waters dominates with layered riffs, that instantly check the ‘awesome box’ and will no doubt have thousands of budding shredders, studying his licks in bedrooms and rehearsal rooms, across the heavy metal kingdom.

This is very much Waters brainchild, as the press release explains that he” handled the all songwriting duties, plays all guitar & bass, engineers, produces, mixes and masters Suicide Society… and Waters is also back commanding lead vocal duties, as he did on the critically acclaimed King of the Kill (1994), Refresh the Demon (1996), Remains (1997) and other Annihilator albums over the years.”

My Revenge comes charging out of the track two slot, packed full of gusto and malevolence, offering a classic Annihilator sound of yesterday, but with a sonically gratifying middle-eight section before the solo drops. Hints of “Hetfield” style vocals are dotted here and there, proving that Jeff is quite the talented bloke!

Always the one to push the envelope, Snap opens with acapella style vocals before a plodding, pounding build up and tear down. “You try hard to annoy me, to creep under my skin”, is whispered by Waters, who is a master of adapting a strong personality within his vocals. Another catchy melodic chorus swells with weaving key changes, that fit perfectly under a beautifully melancholic vocal delivery.

Suicide Society is packed with surprises that are all delivered with technical perfection and crystal clear production. Flashbacks of Alice in Hell, come in the shape of Creepin’ Again, which is a fine example of just how Annihilator (Jeff Waters), can pull off spectacular, unpredictable compositions.

Drum duties on this album are handled by Mike Harshaw, who continues into his fourth year with Annihilator and does a damn fine job, displaying enough skill, that would have Gene Hoglan, standing to attention.

As we reach the final stretch of the album, Break Enter shows the first signs of a dip in quality from the lyrical department, with a cheesy composition, that tells the tale of dealing with home invasion. Although musically pleasing, Break Enter offers all the treats from the Annihilator box of tricks, however the lyrical content was hard to get past on this one.

Things pick up again with The One You Serve, which again, has a unmistakable Hetfield sound to the vocals and drives with a crushing, stomping riff, that will no doubt be a winner in a live setting. Harshaw’s drumming rumbles and pulses from the speakers on Death Scent, which delves between various incarnations of hard hitting face paced riffs, through to ballad style sections and even a ‘mild’ black metal sequence, with organ style keys woven into a hectic low end buzzsaw style riff.

Waters gives his most guttural vocal delivery on this composition and although first instincts inspire a feeling of too many sonic flavors being added, multiple listens earn the respect due for such a cross pollinated arrangement. 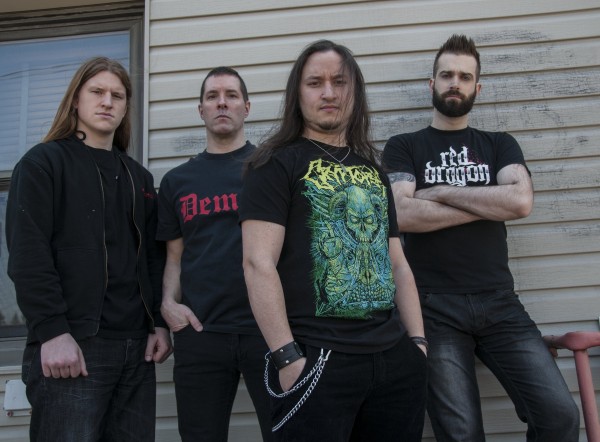 Overall, Suicide Society, seems a little confusing at times and could almost be used as an aural  journey through the subtleties of blending metal’s sub genres, but once you get past the elitist view point, what you have on your hands, is a well produced album, predominately created by one very exceptional musical prodigy. This is literally the inner workings of Jeff Waters brain and it’s not a bad place to find yourself.

Suicide Society is not the bands strongest album when listened to first, but is undeniably still a powerful album, that reflects the bands history in taking chances and producing moments of brilliance amongst the drab, bland metal, that pollutes the genre. Multiple listens will open doors into sonic areas of clever songwriting, urging you to take a different view than that of your your first initial impression.

For more information on Annihilator, just hit the links below.

Order your copy of Suicide Society from UDR Music by clicking on the graphic below. 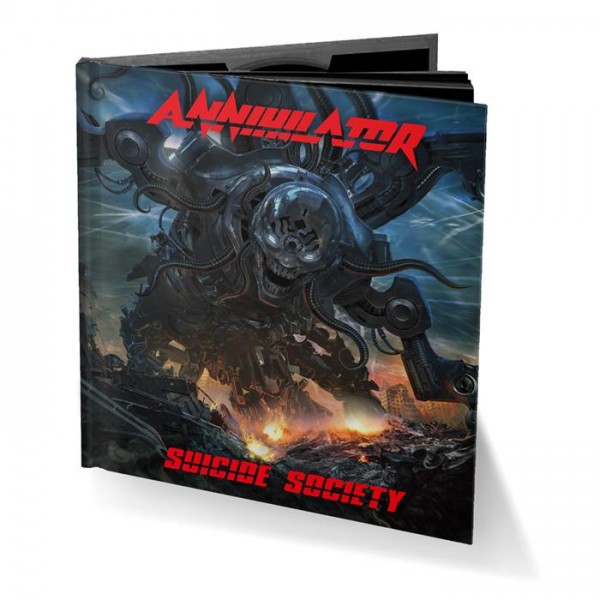 Annihilator will be taking to the stage in Dublin’s Button Factory on Thursday October 1st, for their debut headlining slot in Ireland. For more information please check with DME Promotions for stage times and ticket availability, click here. Tickets are on sale now from Ticketmaster.ie and Sound Cellar. 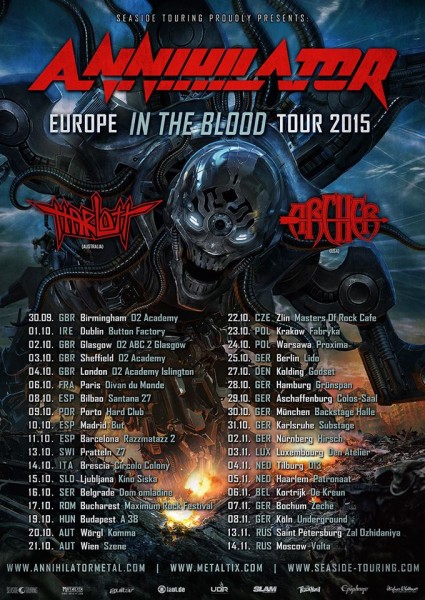