New York thrash icons Anthrax has revealed their new trailer for the tour edition of ‘For All Kings’ ahead of their UK and Europian dates which kick off next month for the apply named ‘Among The Kings’ tour. The band will be celebrating the 30th anniversary of their classic ‘Among the Living’ album! Get all the details below. 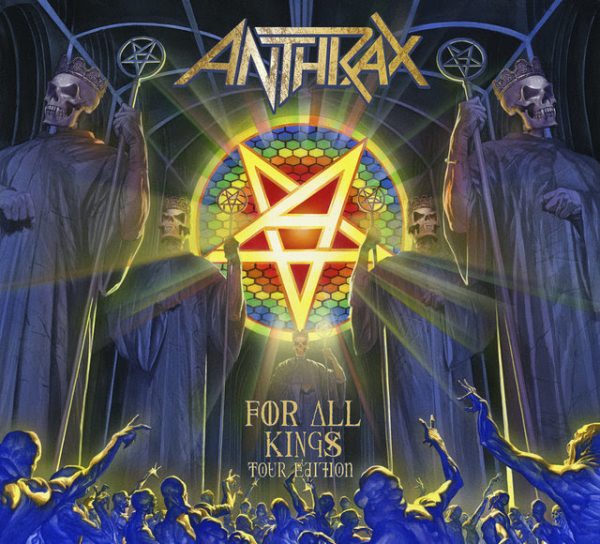 February/March 2017 will see legendary New York thrashers ANTHRAX back on European soil for the band’s first full European headline tour in more than a decade.

Dubbed the Among The Kings tour, dates will kick off on 9th February in Birmingham, UK and wrap on up in Paris, France on 16th March. On each of these dates to celebrate the 30th anniversary of its release, ANTHRAX will perform live, start-to-finish, their classic and Silver-certified 1987 album Among The Living alongside fan favourites from throughout the band’s rich 35-year career. ANTHRAX’s Among the Kings European dates are in support of the band’s critically-acclaimed album For All Kings (26 February 16 via Nuclear Blast). British metallers THE RAVEN AGE will support on all dates.

In support of this upcoming trek, ANTHRAX will release a limited tour edition of their latest studio album For All Kings on February 17th. As well as the regular album it will include ‘Vice Of the People‘ (previously only available in Japan) as well as a bonus disc of demo versions.

Today, the band unveil the official trailer for the tour edition of For All Kings. Watch it below: