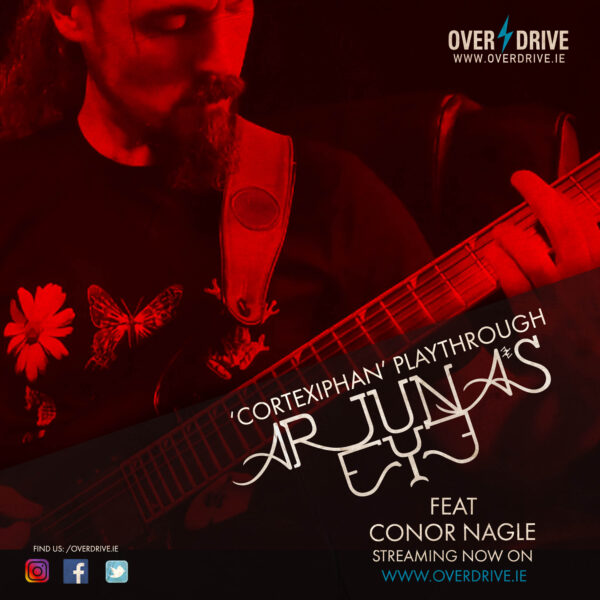 With the release of their latest studio album ‘Amalgam’ last year, the Cobh-based band continue to win over critics and fans from all over the globe, thanks to their balance of huge choruses and progressive crushing riffs.

Following the success of their most recent single, “Cortexiphan” the band have released a playthrough video from guitarist Conor Nagle which you can view below:

Currently deep in the writing process, Arjuna’s Eye have been working with Lost Island Bookings on a series of UK dates that will be unveiled soon.

‘Amalgam‘, the bands sophomore studio album was released in October 4th 2019 and is packed with the bands’ trademark sound from start to finish.

Their latest single/video ‘Cortexiphan’ sees the band continue with their trademark template, gushing with melodic technical arrangements that take flight; thanks to the golden pipes of vocalist Sean Frahill. See below;

Starting as a Progressive/groove-metal entity, Arjuna’s Eye was born in the city of Edmonton, Alberta, Canada back in 2013.

Initially formed as a solo project from guitarist/composer Conor Nagle, (who self-released the bands’ debut album ‘The Invisible Landscape’ in 2014, before moving to Co, Cork in Ireland back in 2015), Arjuna’s Eye slowly morphed into a five-piece touring/recording band, who have been crafting their constantly evolving sound to present day, resulting in the release of their second album entitled “Amalgam” in November 2019.

Combining a captivating and aurally deep conglomerate of heavy sub-genres, that when spliced together, translate to a truly unique listening experience. Arjuna’s Eye specialises in creating a contemporary and refreshing sound, drenched in heavy riffs and powerful anthemic vocals, laced with progressive arrangements.

The band have shared stages with metal acts such as Textures, Bloodshot Dawn, Exivious, Words That Burn, and Reprisal over the last 2 years Arjuna’s Eye are only starting their campaign on reaching a bigger audience and we urge you to get on board now.

2020 has seen the band earn their first UK radio premiere with Kerrang! for ‘Trial fo the Grasses’[see below] a nomination for 2020 ‘Band of the Year’ in the Irish Metal Poll Awards.