It’s a cold and miserable Monday evening in Dublin. Ireland is still getting over the festivities of St. Patricks Day, which ended up as St. Patrick’s weekend and Paddy’s day HQ is of course, in Dublin. More importantly, it’s the start of the working week again, so we need a pick-me-up. Armored Saint are in Ireland for the very first time, and have come to Dublin to break the silence that is left after the weekend. Overdrive’s Shaun Martin tagged along to see what happened. 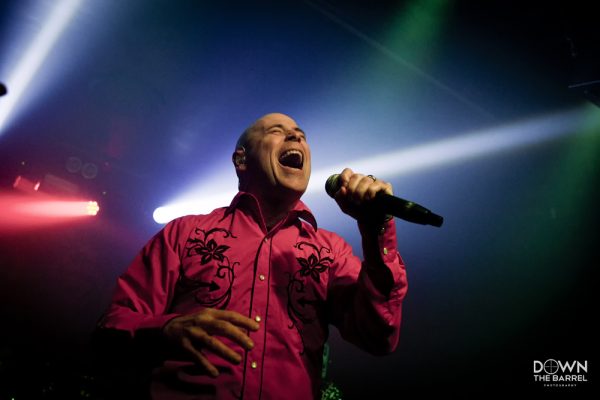 Starting off the Monday night ruckus is Belfast-based heavy metal maestros Sinocence. They suit up and move out onto the stage at the stroke of 8 pm to introduce the crowd to tonight’s audio pleasure. The Northern Ireland 4-piece appears to have been around the block a bit, as this type of gig seems to be rolling right off their backs.

There is a real sense of commitment from the 4 northerners because you can tell that each of them have put a lot of years into their craft. Sinocence are no strangers to Dublin, but it’s been a few years since they’ve been in the Voodoo Lounge. Although it’s a Monday night, they give thanks to the crowd that have gathered here to see them. Although it is a small enough one, for now, it doesn’t out them off their game in the slightest and on it goes without a single fuck given. 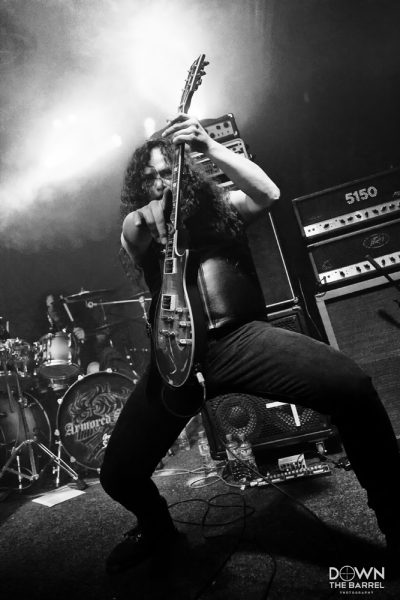 Delighted to be supporting Armored Saint on the Irish leg of their tour, the band looks well chuffed as the seriously chunky and heavy tunes are belted out. Sinocence commands the stage like pros and doesn’t want the night to get cold. Throwing old and new songs at us, the tune selection goes down heartily with the growing crowd, who are getting more and more into the music. As I scan around the venue.  I see a multitude of heads bopping to this full metal jacket of old school heaviness and it only gets more intense. Sinocence will be around for a long time yet if this keeps up and I’ll be there in the crowd again seeing them strut their stuff. 3.5/5

The crowd is growing in size as the venue gets more and more packed. We hear some Malmsteen, Thin Lizzy, Accept et al. ring out over the PA as we wait in anticipation. Out of the doomy red glow of the stage lights, Armored Saint emerges and catapult the Voodoo into tune-town. Starting up their night with ‘Win Hands Down’, their opening track from their 2015 release of the same name, the band greet Dublin with the same 1980’s L.A. virtuosity and candour. Singer John Bush (former Anthrax frontman and almost-Metallica frontman back in 1982), settles into his position instantaneously, giving the audience exactly what they want. As they roll into their second song, ‘March of the Saint’, the enthralling 80’s solos are lifted by old-school shredders Jeff Duncan and Phil Sandoval. 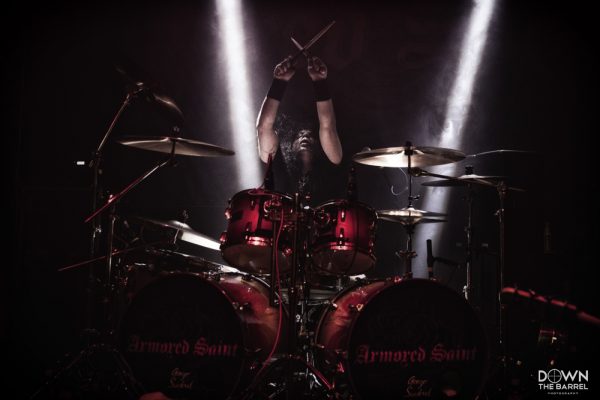 Both guitarists duel side by side, before launching into a harmonised solo section, reminding the punters that although they’ve been doing this since 1982, they’re still giving everything they’ve got onstage.
After ‘Nervous Man’ Bush states it has been a few decades since the first release, but they have ‘broken the Armored Saint hymen’ by hitting Dublin for the very first time and look forward to spending time here when they get the chance. The greeting is short and sweet, but sincere. ‘An Exercise in Debauchery’, again from the ‘Win Hands Down’ repertoire is dedicated to Bush’s elderly neighbour who apparently may have gotten a bit kinky in the shooting of the NSFW video! 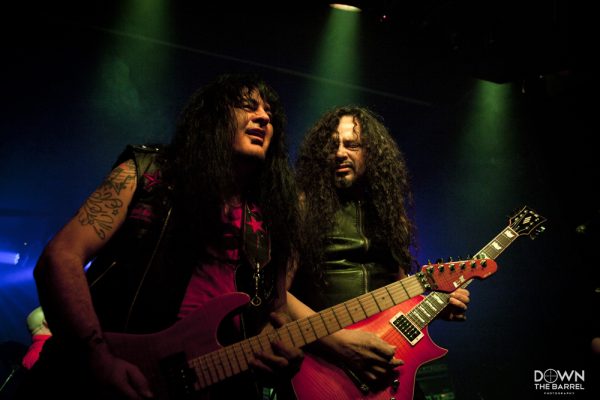 Once again, both Duncan and Phil Sandoval run wild on the fretboards, but it is the other Sandoval brother, Gonzo, who is literally tearing the ambience in 2. The drum sound on tonight’s stage is excellent, with every thump of a bass drum whomping through your chest like a jackhammer. This leads into ‘ Control Issues’ from the ‘Revelations’ album from 2000.  Unfortunately, ‘In an Instant’ is delayed for about 10 minutes because something small has somehow become lodged in Bush’s right ear. He takes out his right earpiece and asks someone from the audience or road crew for tweezers to dig it out. Eventually, someone runs to the shops to go get him one… life on the road, eh? 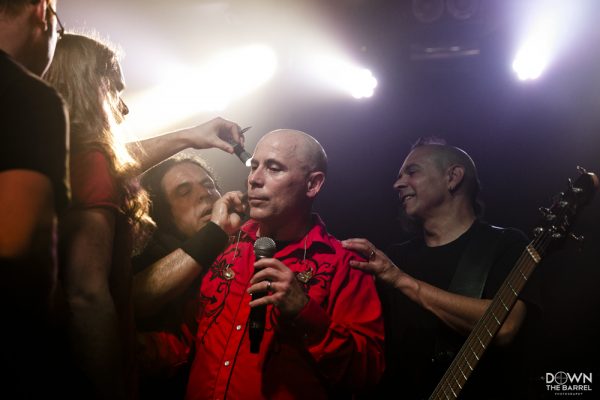 As we tear through the setlist with the band leading the charge, bassist Joey Vera can be seen losing his shit and bouncing from one side of the stage to the next. Bush’s ear problem still hasn’t been settled but the band don’t let that get in their way because this is the first Irish show they’ve ever played and nobody wants to go to the emergency room when they’re on tour. ‘Last Train Home’, dedicated to the memory of deceased original guitarist Dave Pritchard, starts slow and melodic but when the bass drums kick in, it cuts you in half. It’s a monstrosity of musicianship, purely built for one purpose; to remember their friend and founding member.

After ‘Chemical Euphoria’ (no prizes for guessing what that song is about), we get a drum solo from Gonzo and the band kick into song 9, ‘Stricken By Fate’. Bush mentions Bono as one of his favourite singers in the world, and that U2 are one of the best bands that Ireland has ever produced.  The song is about taking good care of the earth called ‘Mess’. It makes you think about what we’re doing to our home and why we should leave it in good shape for our kids. ‘After Me. ‘The Flood’ is declared the ‘Big Hit’, as Bush then retreats to sit in front of Phil’s guitar stack for a little bit, but then gets to his feet to hammer in the nails into the final few songs of the set. 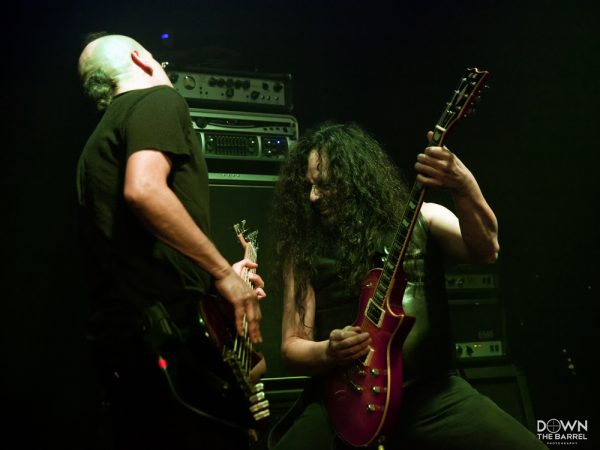 ‘Left Hook From Right Field’ blends onto ‘Reign of Fire’. Again and again, both guitarists take centre stage to strut their stuff as the drums continue to shake the foundations. The final song is crushingly heavy, and we know that the time is ticking to end the night. The encore is washed down with ‘Can U Deliver’ and ‘Mad House’, both from the debut album ‘Armored Saint’ from 1984.

So we went proper old-school tonight with one of the real backstory bands from the 80’sheavy metal days that never quite reached the heights of fame like Metallica, Twisted Sister, WASP, etc. The guys have lost none of their flair for theatrics and showmanship that existed back then and we now know that Belfast Limelight is in for a proper night out. This was a stark reminder of what it was like to be around this scene back then – I wish I was, but I was only 2 at the time. Armored Saint have promised to return and I want to be there when they do. 4/5

March of the Saint

An Exercise in Debauchery

After Me, the Flood 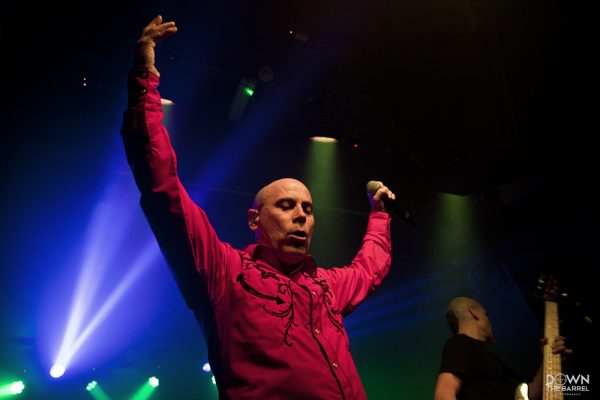