UK Metalcore trouble makers Asking Alexandria took Dublin’s Olympia by the short and curlies this October and it was one hell of a show. Fans flocked to see them rip out some new material from new album ‘From Death to Destiny’ and they certainly got their money’s worth. 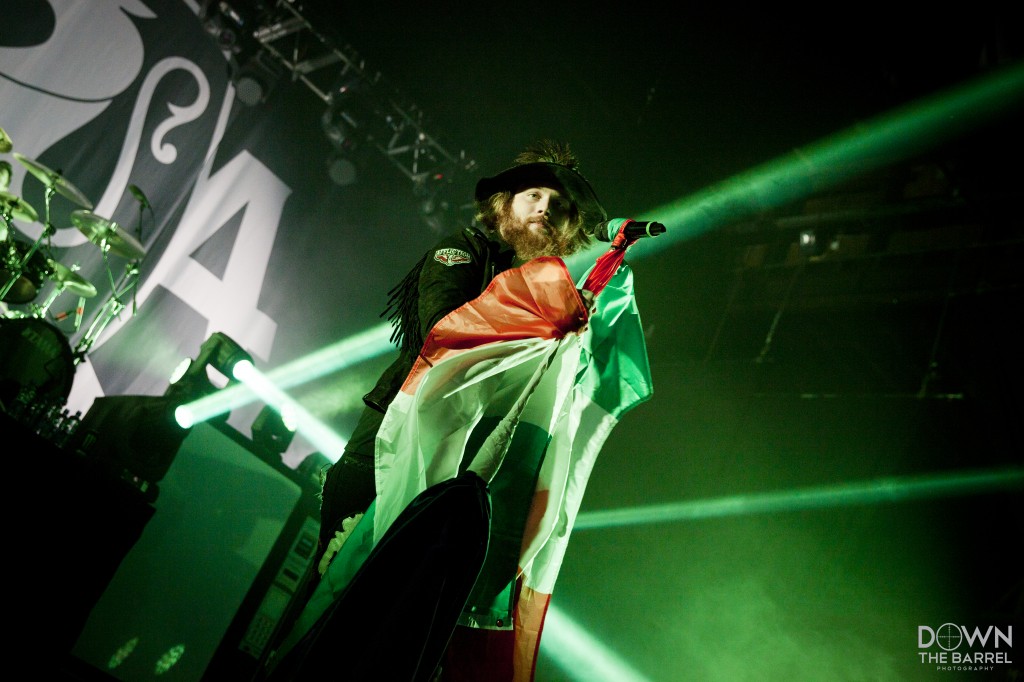 Looking to the stage and waiting for the band to come on, one can not ignore the the Irish flag oscillation to a fan and condom balloons! Well, it is Asking Alexandria after all! The crowd is young, between fifteen and twenty years old, made up of mostly girls and the atmosphere is static with anticipation of sighting a neck tattoo or skinny jean to appear on the stage. . The drums are put on a height, a pedestal for all to see. At either side there are props designs as vending machines, which radiates a white glow that ties in with the bands current album cover; as there are four, you would nearly expect one band member to be behind each one of them.

The venue goes dark and cue the godly music that is forever present at these gigs, every girl in the place emits a scream of joy, their excitement igniting. The drummer is first on stage (shock), without a top (horror) and the rest of the band enters while the drummer plays a slight drum solo.

The first thing to notice, if not an avid Asking Alexandria fan, is that all on stage look like a normal metalcore band (dressed in black studded clothes, greasy hair) except singer Danny Worsnop who is clad in tight multi-coloured patchwork jeans, white western style beat up old boots, a fedora hat topped with a feather and a black studded cowboy jacket, supporting quite a full beard. He looks older than the rest of the band and has the swagger of a seasoned Rock star.

For the opening two songs both guitarists and bassist jump and head bang together; the two guitarist at either side of the stage and the bassist just off left center. They are well rehearsed in performing and know what the crowd are looking for – energy and commitment. There is a connection made between the band and the audience, with those on stage running around interacting with the crowd and each other effortlessly. 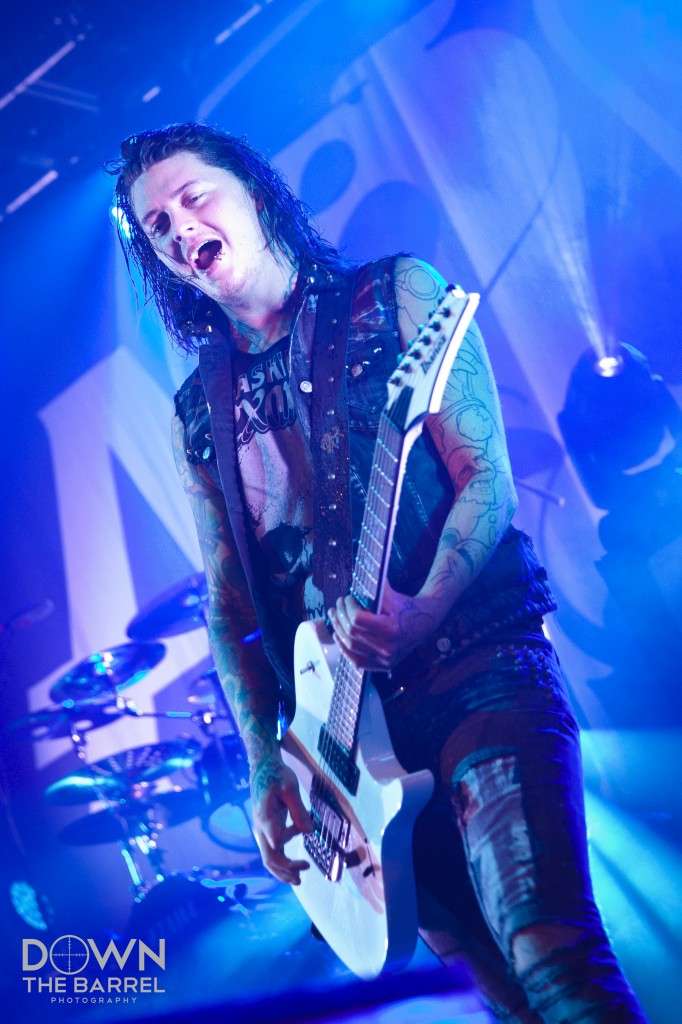 The singer has a tendency to sound vaguely like Roger Daltrey especially when ad lib’ing at the start of “A Lesson Never Learned”. The tremolo guitars behind him are very definite, driving the song forward with a solid double bass pedal to back them; the crowd gets drowned out with the intensity of the performance. An amateur mosh pit ensues in the main standing area. Everyone around them is head banging to the timing of the drum snare, it is captivating to watch. Suddenly the loudness disappears and only the guitarist sings with quiet guitars. This cool down period sees the crowd grow silent with beautiful orange/red lights of them. Looking upon this scene camera and phone lights are scattered around the room fixed on this one spot – More people are taking pictures than enjoying one of the first truly surprising moments of this gig.

A drum solo introduces the next song that sounds pretty much the same as the last one. There is a good snare beat to it that gets you hand banging without knowing and I am paying more attention to the drummer and his tattoos which seem to be a collecton of English/Welsh symbols. 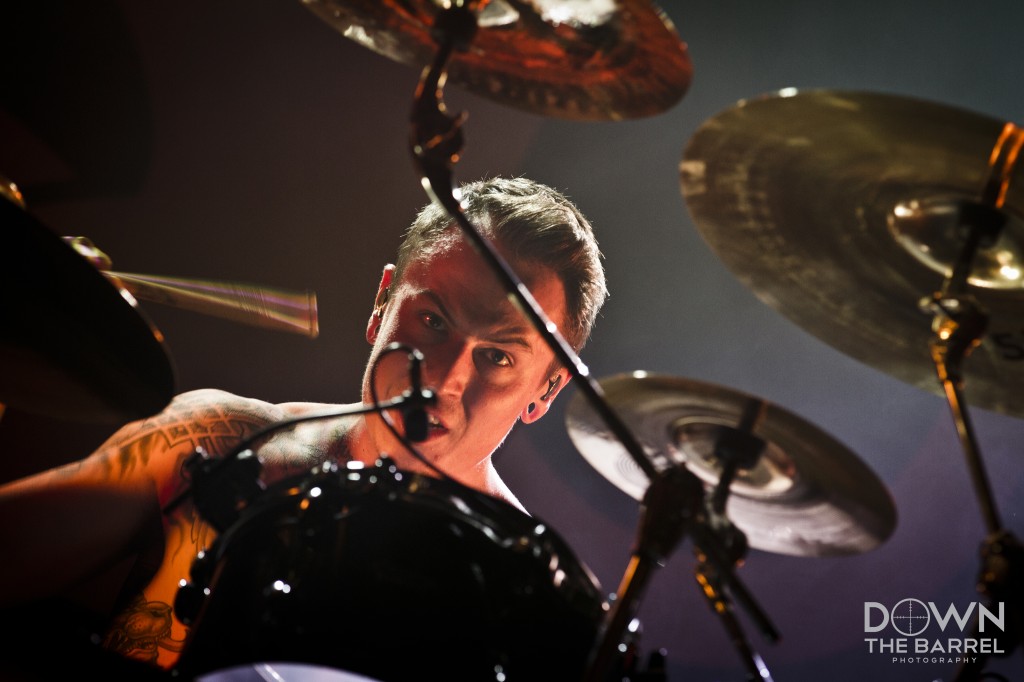 As the band pushes on through their set, a petite mosh pit has started to form in front of the stage. Difficulty emerges as someone has been hurt and the mosh pit is disbanded. The crowd look upon a body on the floor as security flock to the area. No one knows what to do for a few seconds but the band continues performing without paying much attention to the predicament. After a further few seconds the person is up and security leave a crowd that are more sombre; they turn to face the stage, all energy veiled by the incident.

Danny finally addresses the crowd for the first time “Hey guys” is all the crowd needs before a huge cheer erupts that is the loudest I have ever heard in such a small area. Bras are thrown on stage with messages written in them much to the visible joy of Worsnop who collects them on his mic stand as he talks. He introduces the song to come next and crudely adds “you will see what comes afterwards”, whispering “it’s me”.

The intermission consists of a light show with music similar to the conclusion of “The End of Me” from new album ‘From Death to Destiny’.

“Someone, Somewhere” opens the second half of the show and Danny reappears on stage jacket and hat.  The driving semi crotchet bass drum and basic four/four guitar strum chorus keeps the audience on their feet and head banging in unison. Lead guitarist and backing vocalist Ben Bruce is seen to be openly drinking and smoking in front of the crowd, oblivious to the rules and regulations (such a bad ass Rock Star). 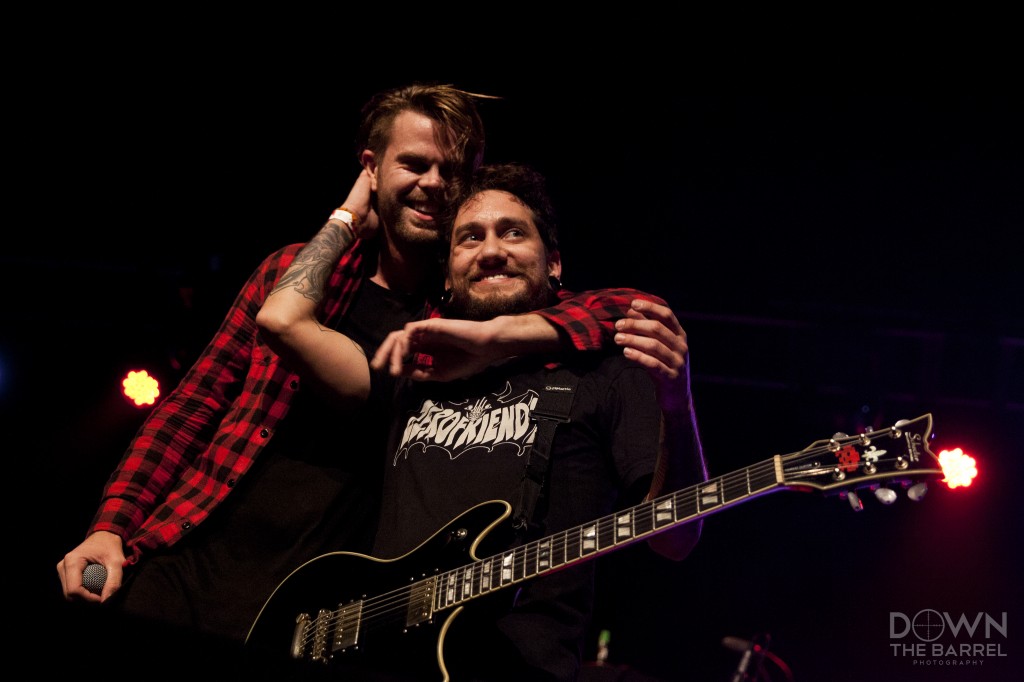 The band informs us that they are “slowing it down” before continuing the show with “Moving On”. The song has nice melodic guitar with wailing notes and beautiful low bass that vibrates to your core. Danny has hints of Bryan Adams in his voice for this touching song, and the modulation towards the end completes the checklist of what makes a great ballad. The bassist, Bettley, catches the eye of a girl on the balcony. For the reminder of the gig he will glance up at her smiling.

Danny is left alone on stage at this point and asks the crowd “You guys want to hear some really old shit?” which is answered by Bruce and Cassells coming onstage and them playing snippets of Pantera’s “Walk” and Linkin Park’s One Step Closer. Bruce continues to play guitar while Worsnop tries to talk. Fans get a peek inside that friendship as they banter openly in front of them. One fan gets really excited while the rest of the audience calmly look on and Danny comments “She’s really enthusiastic, I like it!”

The band proceeds to play a song off their first album ‘Stand Up and Scream’ from 2009. Bassist, Sam and Ben Bruce sing to the crowd in this one, while masses of different coloured lights shine into the audience. The varying louds and softs keep the crowd active. They start to clap along to the pre-recorded vocals behind the band. Because of the fast nature of the song the clapping seems to merge and turn into chaos and come together again. The crowd is now leading the song; by the end Worsnop is only singing bits of the song but egging on the crowd to continue.

Guitarist, Bruce, continues to annoy the singer by playing when he is talking, with Worsnop “threatening” to quit because of the “man child”. The next two songs Danny explains to the crowd are gold “because of you guys”. They perform Not the American Average and The Final Episode with liveliness and vigour.

The band leaves the stage momentarily to the coaxed back on by the screams (though not as loud as before) of the audience for “one more song”.

Their encore is three last songs Killing You, The Death of Me and Poison. Danny seems to be getting bored and starts to interact more with the rest of the band, following them around the stage and messing while singing. 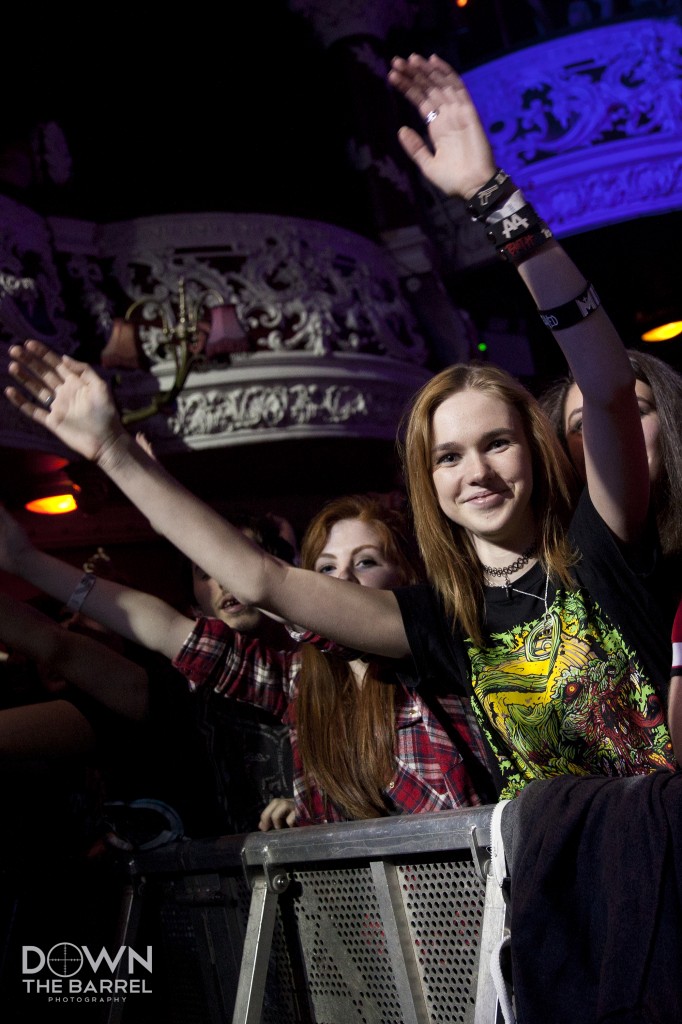 “Poison” is a great last song whose ‘clappy’ chorus acts as a truce in the mosh pit which ends once the dotted rhythm verse kicks in again. 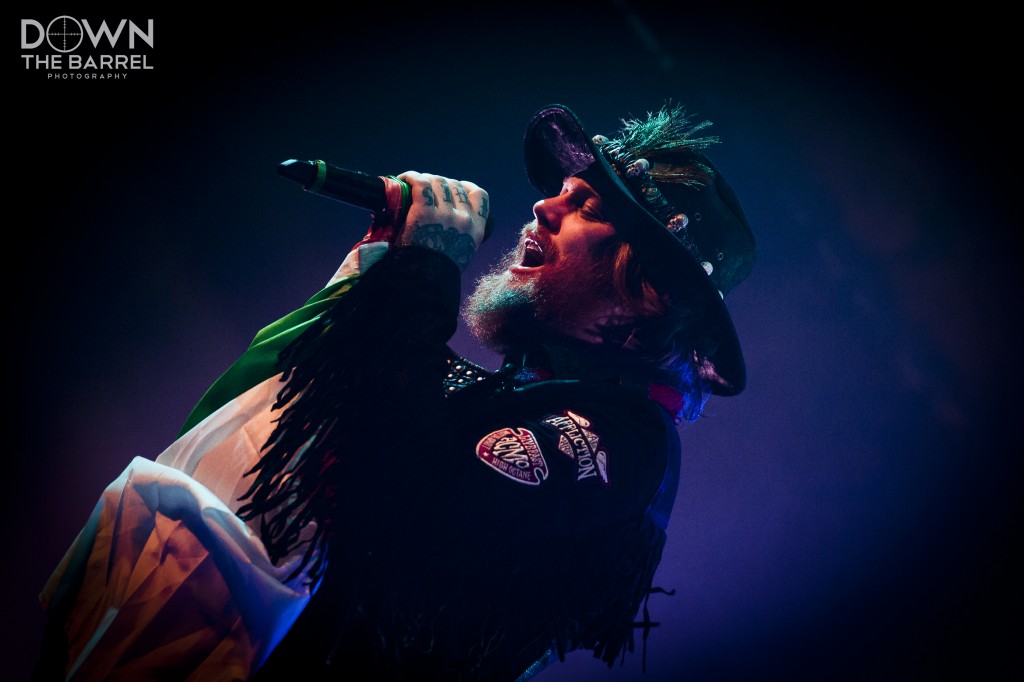 Don’t Pray for Me

Break down the walls

Not the American Average

The Death of Me

Photography – Steve Dempsey of Down The Barrel Photography. 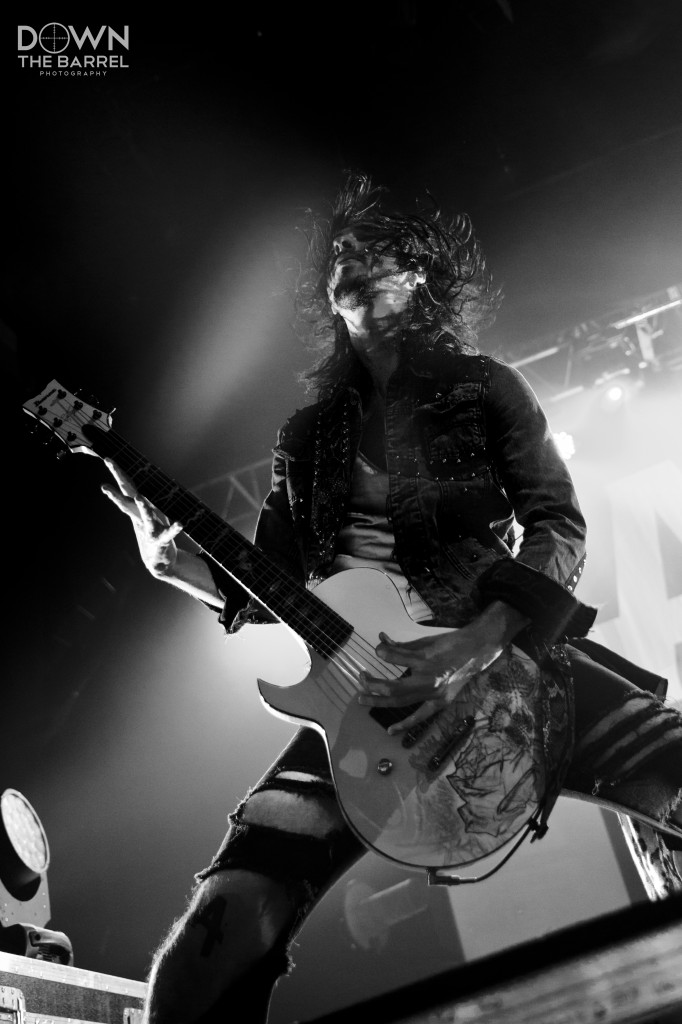 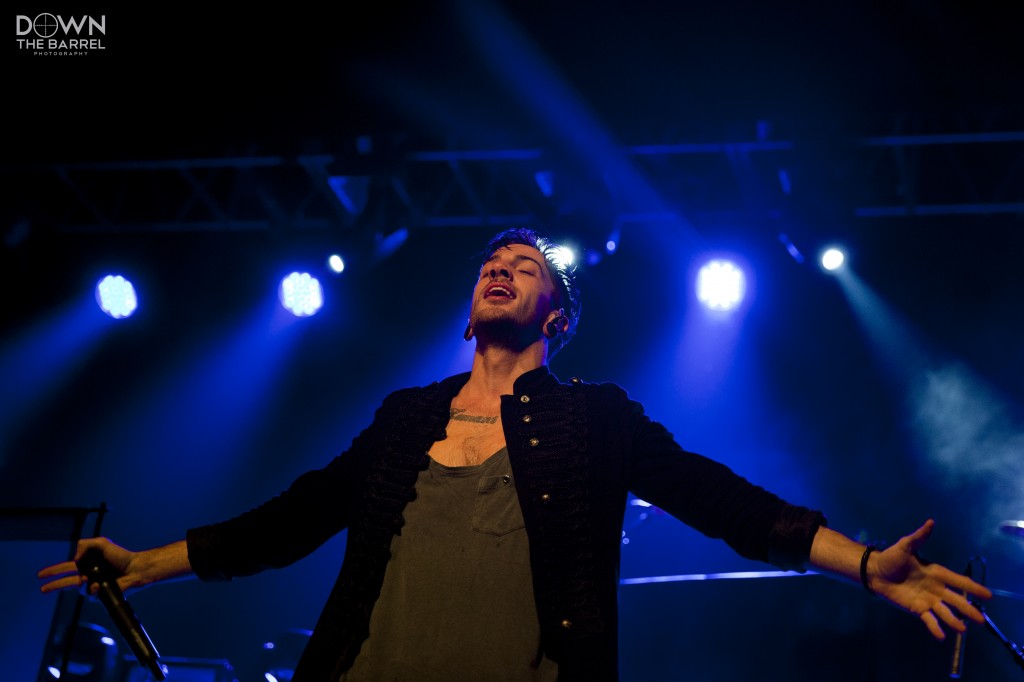 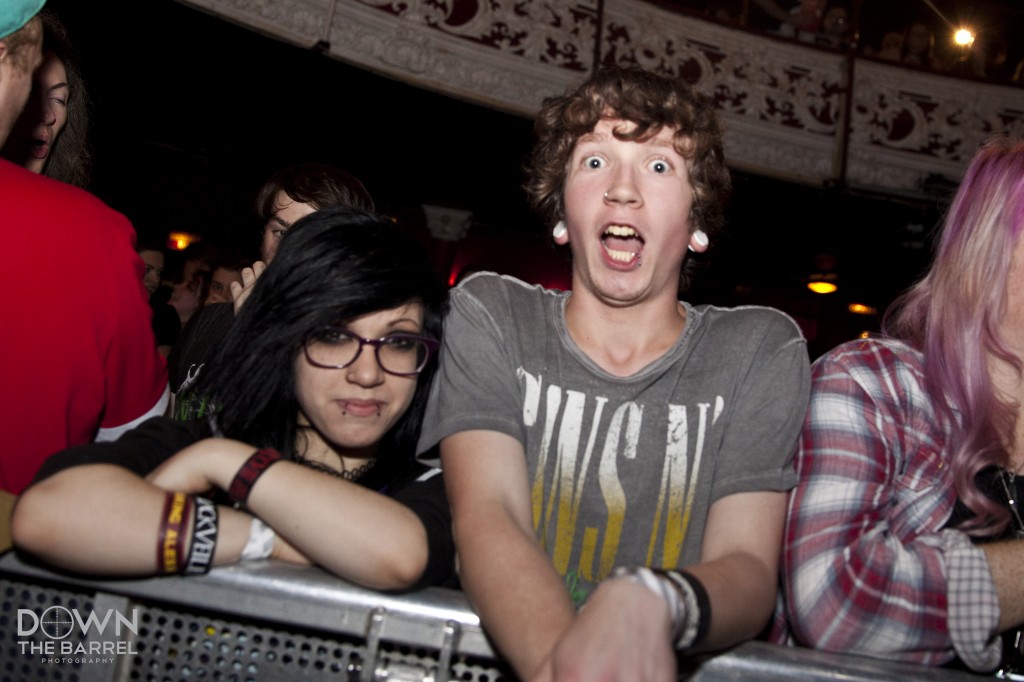 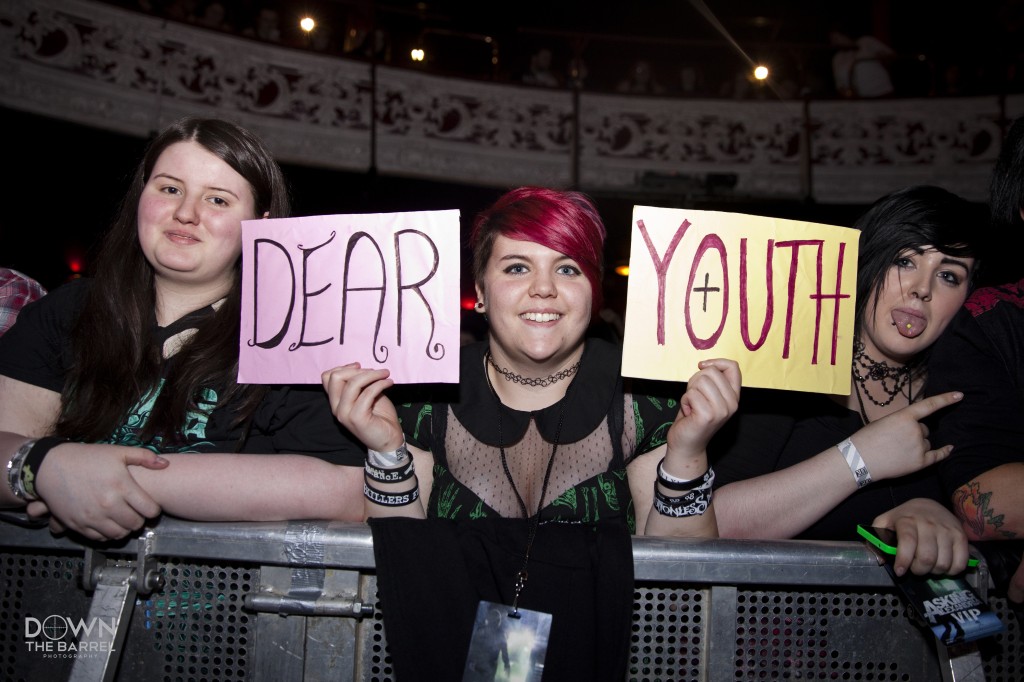