Swedish melodic death metal pioneers AT THE GATES continue to promote their acclaimed current album “To Drink From The Night Itself” by launching a new video clip for the track “The Colours Of The Beast”.

AT THE GATES vocalist Tomas Lindberg Redant checked in with the following comment: “Right in time for the prestigious Roadburn Festival appearance, we decided to release yet another video from the latest album. This time we want to focus on the heavier, grittier sound of the band, hence “The Colours of the Beast”.

We once again worked together with Costin on this one. We talked with him that we wanted him to try to capture the dark, gloomy side of the band‘s music. And he succeeded, creating the, by far, most dark and twisted video we have ever released. We are very happy to present to you the new AT THE GATES video clip: The Colours of the Beast!“

As mentioned, AT THE GATES will next appear playing a very an extraordinary show in regards to the setlist and special guest appearances at the prestigious Roadburn Festival on Friday, April 12, 2019, at the 013 venue in Tilburg, The Netherlands.

AT THE GATES frontman Tomas Lindberg Redant furthermore acts as curator for the 2019 edition of the festival, presenting carefully and tastefully selected artists to perform under the event banner “The Burning Darkness“, which will take place across multiple stages on Friday, April 12 and Saturday, April 13. More info about the festival can be found here.

Check out the video which was created by Costin Chioreanu / Twilight13Media, below;

Here is a list of the upcoming shows by AT THE GATES (Latest updates marked *): 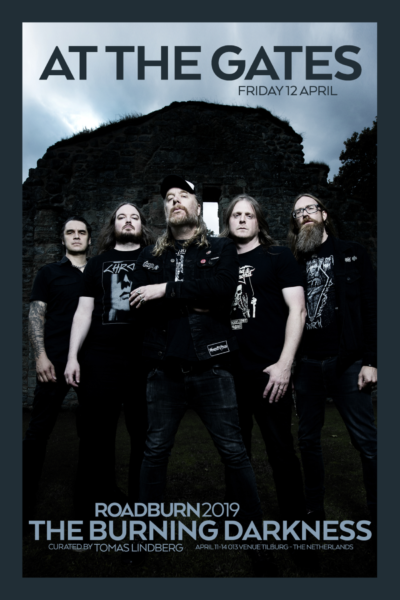