Australia’s Dune Rats will be making their Irish debut in the Capital’s Grand Social on April 4th. Full details below; 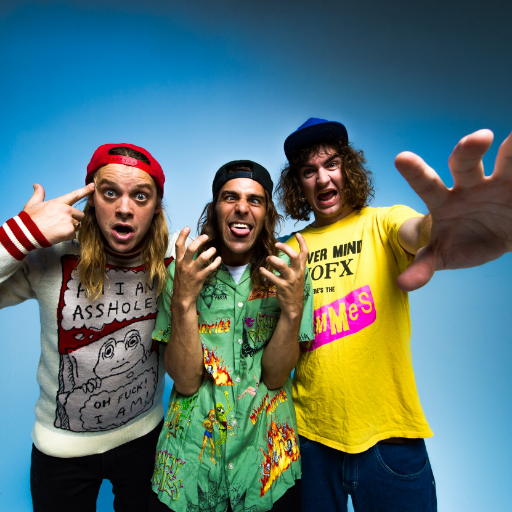 Dune Rats live in The Grand Social on Saturday, April 4th. Tickets are on sale NOW via Ticketmaster priced at €15 (inc booking fee).

For Dune Rats, the key to making their third album, ‘Hurry Up And Wait’, was coming back to where they began.

After the success of their 2017 breakthrough, The Kids Will Know It’s Bullshit, Brisbane trio Danny Beus, Brett Jansch and BC Michaels could have gone anywhere in the world and worked with anyone they wanted for their new LP.

And, at first, that’s what they did. After starting the writing process in Australia—at the rural Victoria farm belonging to their mate Ross Knight from legendary punk act Cosmic Psychos, and at a rat-infested farmhouse in Boonah, Queensland—the band flew to the very different surrounds of LA to work with legendary music producer John Feldmann.

There, they found themselves in a surreal whirlwind of personal trainers, Soho House sessions, movie star sightings and gated communities. But after spending ten days in Calabasas working on music, they realised the lyrics they were singing didn’t feel like genuine Dunies. As lead singer Danny Beus put it: “People were trying to make us write songs about being in the club. Well, where I’m from, the club’s the Bowlo.”

America made Dune Rats realise what they did—and didn’t—want their music to be. They returned home and changed approach, swapping superproducers for old friends. Their right handyman became James Tidswell of Violent Soho; a longtime mate who, rather than trying to shape their output, acted as an incubator for what was already there. Later, they recruited engineer Mitch Kenny, producer and songwriter Miro Mackie, got Mike Green on board to mix the album and recorded it all at The Grove Studios in the Central Coast with Tidswell and Kenny.

All three names were vital to the process of making the album, in part because they knew when to hang back and let Dune Rats be Dune Rats. With trusted hands holding it down, the boys were given the headspace to make music at their own pace. As bassist Brett Jansch says: “We were doing exactly what we wanted to do.”

On ‘No Plans’, the album’s anthemic lead single, Dune Rats sing about both the bonkers and boring bits of playing in a band with your friends. On ‘Rubber Arm’, it’s about letting yourself get talked into going out (as they put it, the nights when you “go to the pub for one drink and end up in Vegas with your undies on your head and a fresh Nickelback tattoo”.) Elsewhere, they sing about making the best of bad situations (‘Rock Bottom’), the ridiculous scenarios you can’t believe happen to you