Avenged Sevenfold – “Hail to the King” 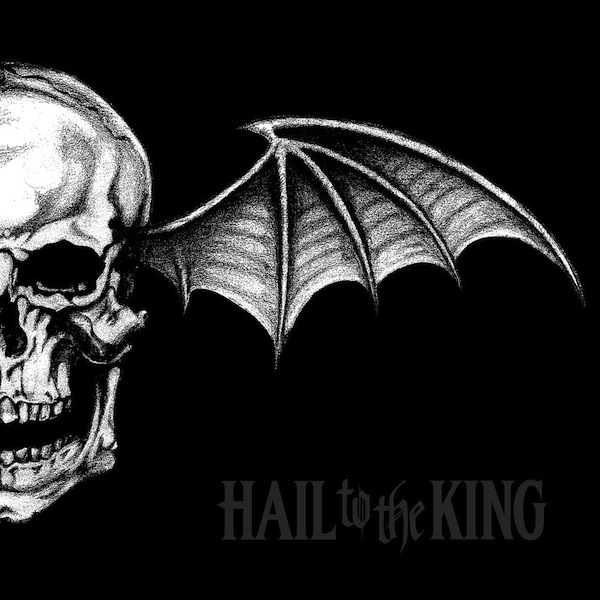 The Orange County boys come back swinging with ten slabs of super commercial material in the hope of moving into the neighborhood where Metallica live. This is not a statement that is far from the truth, in fact I can only imagine the band / management meetings that took place prior to the writing of this album. I’m sure there were very detailed discussions regarding the direction the band should take and how to finally “drive home” the whispers and murmurings suggesting Avenged Sevenfold as prime candidates to take the torch from the old guard and march to the top of the Heavy Metal / Hard Rock snow capped mountains and give a victory roar.

Upon the first listen to “Hail to the King” it is just simply impossible to ignore the blatant, if not somewhat arrogant imitation of Metallica’s commercial opus that is the “Black” album. Don’t get me wrong! This is a fine album, but there has to be some consideration taken into this review regarding the listeners age.

My take on this is, if you were old enough to be of an age where you were attending clubs, gigs back in the late 80’s early 90’s. A time when “Black” album came out or Iron Maiden’s “Seventh Son” and or course Gun’s n’ Roses ground breaking “Appetite for Destruction’ then “Hail to the King” will seem like nothing but a tipping of the hat to these genre’s and nothing original what so ever.

However, should you be lucky enough to be of a younger age then let me tell you that this album will undoubtedly be the “Black” album of your generation.  If money had a sound, then it would be “Hail to the King”. The production on this album is nothing short of outstanding all credit going to Uber Rap music producer Mike Elizondo (50 Cent, Eminem & Snoop Dog) who also worked with the band on their previous release “Nightmare”.

Opening track “Shepard of Fire” has a slow paced Black Sabbath feel to the arrangement with a noticeable monster presence from new drummer Arin llejay who took over the position from former Dream Theater superstar drummer Mike Portnoy.  Choppy guitar riffs weave through the verses supporting a very over produced vocal sound from M. Shadows. You could almost be mistaken that Bob Rock snook in the back door at night and adjusted some of the mixes as it’s got his mark all over this album from the get go.

Title track “Hail to the King” doesn’t exactly come raging out of the traps as the direction seems to be more of a lumbering tempo,  allowing the Iron Maiden style “Murray & Smith” duel guitar work to work their magic before abusing their fret boards in the middle eight section of the track. This formula seems to be pretty consistent throughout the record.

Finally, a more up-tempo track. “Doing Time” has more of a traditional Avenged sound with a wonderful display of Alice in Chains style harmonies. There are touches of Stone Temple Pilots mixed with the swagger of classic rock style before you are transported to what sounds like a musical sibling of GNR’s Mr. Brownstone.

At this point, the landscape of this album is becoming pretty obvious, take aspects of some of the best selling albums in the last 25 years and cut and dice them with a sprinkle of Avenged Sevenfold and WHAM! You got yourself a beast of a record that will sell in it’s gazillion’s the world over.

An example of this can be taken from the most shameful of tunes on this album “This Means War”. Which is nothing short of an almost note for note imitation of Metallica’s “Sad But True”. It sounds great, but Christ did anyone tell them that it’s practically identical to the original Metallica song? I know they have always expressed a desire to be as big as Metallica, but this is just a step too far.

As each song passes there is a stand out reference to a selection of bands such as track five, “Requiem” a definite and direct influence to GHOST in the opening segment before arriving at a Phil Anselmo “we’re taking over this town” style vocal. I have no doubt in my mind that every band name that I have mentioned in this review so far was also mentioned during the writing / recording process of this album.

Back to Metallica again with “Crimson Day” which is not a million miles away from “Nothing Else Matters”. A great arrangement with soaring vocals from Shadows which will have the tweeny’s lapping up every second of this with lighters (cough), I mean phones in the air and frothing at the mouth.

“Heretic” the second of the fast paced arrangements on the album and a welcome to this listener see’s a steady crushing tempo. Song structure seems to be a catalyst for a blinding display of the virtuosity from  band-mates and axe brothers Zackey Vengeance and Synster Gates which is undeniably impressive by any standards.

Nearing the end of the album see’s a concoction of styles from Iron Maiden in “Coming Home” along with Metallica raring its reliable head again for “Disposable Heroes” style key changes in “Planets” which is dripping with the vocal styling’s from a certain Mr. Rose.

Album closer “Acid Rain” is over six minutes long, with a very prominent string arrangement throughout. At times, the song almost wanders into the territory of an Andrew Loyde Webber penned opus before swaying back into Avenged Sevenfold territory.

There is no hesitation in my mind that this album will be “HUGE”. The very presence of the album is most likely giving the Bullet For My Valentine boys nightmares as they were practically neck and neck for torch carrying duty. In my opinion, Avenged Sevenfold have made an album that was written and produced with the intention of mimicking the success of various albums and bands already mentioned in this review with particular attention being giving to Metallica’s “Black” album.

The fact that they have the balls to do this requires a level of respect for the band and we wish them all the luck in the world. I would like to end on a hope that the next release by Avenged Sevenfold will be more of an originally penned collection of songs rather than a forensic splitting of Heavy Metal atoms in the hope of generating world domination. Just saying….

HAIL TO THE KING is out now via Warner Music.