BAILER – THE SOUND OF THE IRISH UNDERGROUND IS GETTING LOUDER!


Cork metal/hardcore crew BAILER recently returned from Russia, where they lay waste to a multitude of venues with their savage brand of hybrid hardcore and crushing metal. Ahead of their official EP launch this Friday night, Overdrive caught up with Alex (vocals) and Dave (Bass) to get the low-down on all the recent happenings… 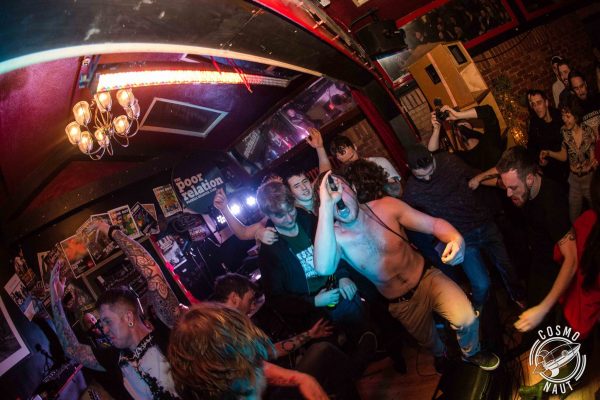 OD – Firstly, let’s get a quick background on the band for anyone that’s not familiar with who you are?

ALEX – Four Irish lads with a serious passion for music, playing live and working towards making it a full-time gig. 3 of us hailing from Cork City and our bass player, Dave is from Waterford, a short journey up the road from us. We basically wanna deliver the nasty riffs, have lyrics full of real feeling based on life experience, banging beats straight to your ears as well as creating the perfect environment at our live shows to best match the grinding grooves and blistering beats heard on record.

OD – This year has been particularly good for Bailer as you’ve attracted some attention from the likes of Metal Hammer, Kerrang! and That’s Not Metal. Coming from Cork, have you found that it’s been a little hard to get recognition not only outside of your local scene but nationally and internationally as well?

ALEX – Absolutely. I can’t imagine anyone from a different country with an interest in metal or hardcore could easily name a popular Irish act in the genre off the top of their head. It never stopped us though, we knew from the start that it was never gonna be easy to break through to these crowds, promoters, podcasts and publications, but with hard work and the right people backing you, we somehow managed it. It’s an amazing feeling to be getting this recognition but it’s also only first contact, we can’t wait to push it further with more releases and tour’s etc..

OD – Having released the EP last month, the official release shows are getting underway, starting with Dublin this week. What are the plans for after these shows?

CHRIS – More tours and more new songs. We have a couple of Irish tours lined up to support some awesome bands from outside Ireland, whom we can’t name yet. We are working on more tours and shows outside Ireland as well as festival appearances for this summer. We have a set we’re really happy with at the moment and a fresh taste for touring now, so we want to keep this momentum going. You’ll get a debut album from us sometime in 2019. This year we wanna play lots of shows and work on new material as it comes to us.

OD – With regards to the bands sound, the term ‘hardcore‘ has been thrown around a lot, however, how would you classify your sound as there is a bit more to it than that?

ALEX – We have a big mix of tastes going on in Bailer and I think it’s very apparent in our sound. We are definitely a hardcore band but with a metal influence going on too. I feel hardcore is very saturated these days with the same old shit, we always wanted to mix things up and keep it interesting.

There’s a strong influence in our sound from the likes of Converge, Norma Jean, Cursed, TDEP and so on, those bands are also considered hardcore but definitely have a touch of something more going on. Keeps things fun for us, both as musicians and listeners.

OD – Bailer recently completed a tour of Russia. How was that experience for you guys and did the Russian punters get the music?

CHRIS – It really was an unbelievable experience, and I’m so happy we managed to make it happen after quite a bit of bad luck in the lead-up. People at the shows were so appreciative and happy to have a band like us visiting their cities, it’s not every day an energetic hardcore band comes around over there.

To be honest, they were some of the craziest shows we’ve done yet, and the love we got from the people was mind-blowing. It’s hard to sum it up, such a different world to what we have here at home.

OD – There is considerably more attention being given to Irish metal these days with the likes of Dead Label, zhOra and Ten Ton Slug getting recognised for international festival slots and radio play. Do you feel that things are changing somewhat and if so why now?

CHRIS – Definitely, for one the general standard of Irish metal bands has gone way up in recent years, probably a lot to do with technology and home recording equipment becoming more easily available over the last decade. We demo our music now before we record it professionally, as do a lot of bands nowadays. It makes for a much better end product that the band is happy with, and when you know you have a decent product, you’re more willing to invest in it coming to life.

I think a lot of incredible Irish bands in the past never really invested time and effort into their recordings and online content as much as bands today. It goes a long way when you’re trying to get metalheads and fans around the world interested in your unknown project. The standard in Ireland is higher than ever at the moment I think. Long may it last!

OD – Now that that EP is out, will you be concentrating on doing an album down the line or do you prefer to release EP’s which is what the trend seems to be these days?

CHRIS – To be honest, we’ve just done EP’s over the last few years because we felt we didn’t have a large enough passionate audience to pay attention to us for a whole album, which is a lot of work by the way! Plus, when you start a band, your sound changes a lot over the first few years while you each get better at working together as musicians.

On this release, we feel we’ve really found where our sound could go next, and with the great publicity and feedback we’ve gotten so far, we’re very excited to work on a full length that really shows what we can do as songwriters and creatives. Rest assured, it will be filthy!

OD – In an ideal world, who would you most like to tour with?

OD – Having gained all of this attention from some of the industry’s top media platforms, what advice would you have for any younger bands that are starting out?

ALEX – Keep at it and stay positive. A lot of the nitty-gritty work that has to be done these days can be disheartening at times, but it really does require that extra push coming from a place with little or no connection to promoters/publications in considerably larger scenes and communities.

Never be afraid to ask for advice either, some of the people who advised us in the past are people we would look up too, we never expected them to be so willing to help. You don’t get what you don’t ask for when you’re starting out!

Bailer will take to the stage in Dublin’s Underground on Dame Street, tomorrow night (Friday, March 9th) with very special guests Animator and Rouen. Admission just €5.00 and expected to sell out, so first come first served.

The guys will have a very limited amount of exclusive merchandise also with hoodies (€25) and Tees (€12) with some bundle offers also.

Click here for the official event link. For more information on Bailer, please visit this link.