Having not released an album since 2005’s ‘The Note’, Massachusetts hardcore outfit, BANE surprised everyone with their self proclaimed ‘last ever release’ in May of 2014 with ” Don’t Wait Up”. Since then the guys have been bowing out in style with a series of farewell shows before they down tools and call it a day. Demented Promotions have announced BANE’s exclusive Irish date on November 3rd, in Dublin’s Fibber Magees, with support from CODE ORANGE. Do we really need to tell you that this will be not only a historical gig, but one that will no doubt be remembered for a long time to come! Trust us, your not gonna wanna miss this show! 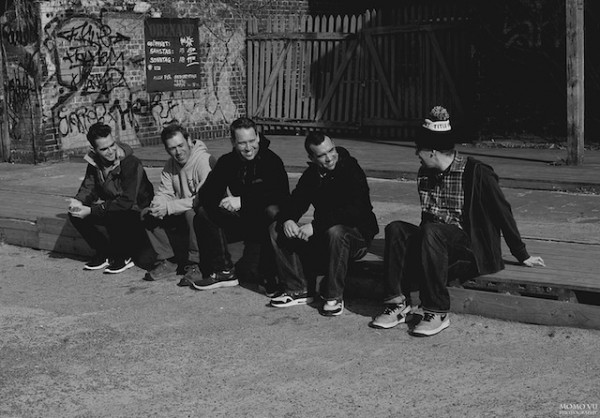 Tickets for BANE are now on sale priced at €17.00 (inc booking fee), with support from Pennsylvania four piece CODE ORANGE. This will be a +14 all ages show, however alcohol will be served to those with valid I.D, so everybody’s happy right? Right! 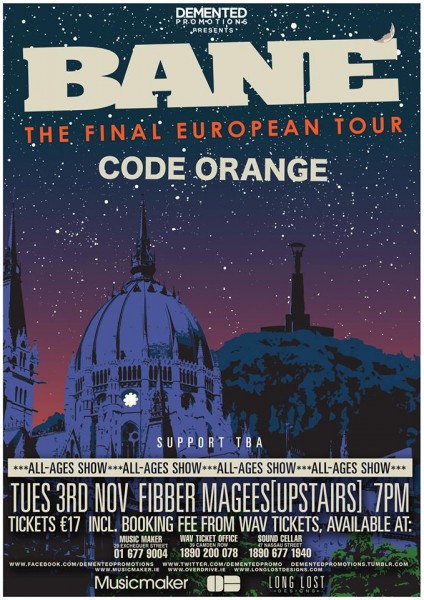 Having formed back in 1994 under the name GATEWAY, the five piece started out as a side project between Aaron Dalbec and members of Converge. Changing their name to BANE, the band quickly began to attract attention from the hardcore community, due to the intensity of their live shows, which were the stuff of legend.

Considered as one of the most essential bands of the hardcore genre, BANE promise to lay out one hell of a show on November 3rd. Expect a face melting set list, that will be covering the bands killer back catalogue, from the early demos right up to the final album “Don’t Wait Up”.

Having recorded in Haverhill, MA with producer Jay Maas, the bittersweet final album comes nearly twenty years after Bane’s first release, which led the band on countless tours and earned them widespread respect for being one of the hardest working bands in the business. Since their inception in 1995, Bane has toured all across the world countless times and has released three full-length albums: 1999’s It All Comes Down To This, 2001’s Give Blood, and 2005’s The Note, in addition to several 7”, EP and compilation releases. 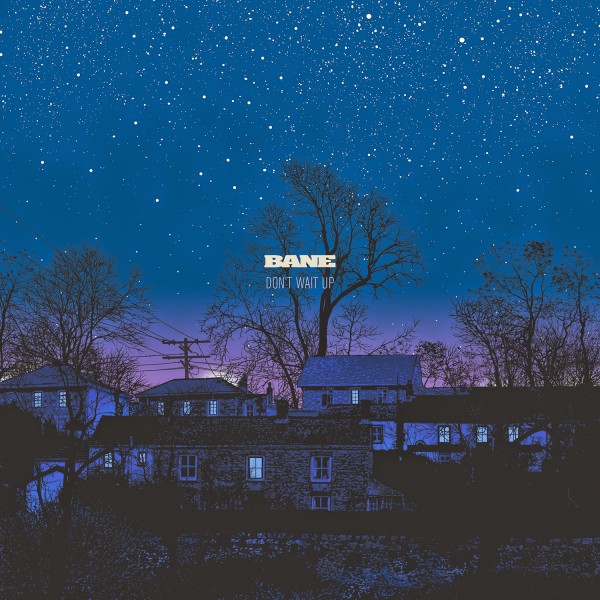 This is your final chance to catch BANE live and we here at Overdrive urge you to get up off your boney ass and get yourself down to Fibber Magees on November 3rdf for a piping hot slice of hardcore history in the making!

For more information on this show, hit the Demented Promotions graphic below!

Tickets for BANE / CODE ORANGE are on sale now and can be purchased from the following places:

For more information on Bane, click on this link.

For more information on Code Orange, click this link.

FOR YOUR CHANCE TO WIN A PAIR OF TICKETS TO SEE BANE / CODE ORANGE, SIMPLY FOLLOW THE RULES BELOW AND GOOD LUCK! 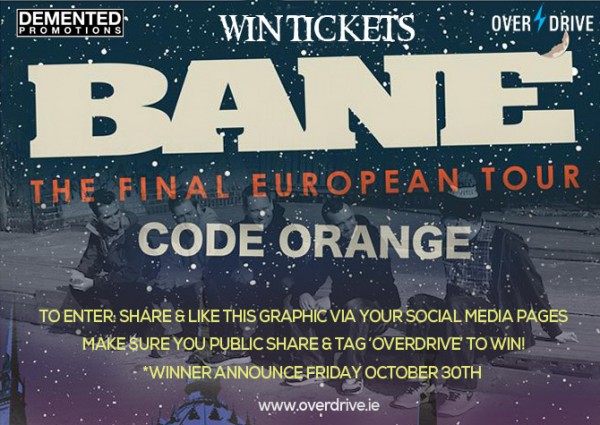 FOLLOW OVERDRIVE FOR ALL THE LATEST, NEWS, REVIEWS, INTERVIEWS AND MUCH MORE!