Behemoth have released a breathtaking performance taken from their upcoming live ‘In Absentia Dei’ release.

At the peak of the pandemic lockdown last year, BEHEMOTH set the world on fire when they took over an abandoned church in rural Poland.

The band brought a their truly spectacular production for a worldwide streaming event, which was lauded by rock media as one of the very best Livestream events to date.

After just over a year since the show’s premiere, ‘In Absentia Dei’ returns in a range of deluxe formats for fans to relive the drama that took place on that fateful night in 2020. The live release is set to hit retailers on December 17th via Nuclear Blast.

Check out the footage below:

BEHEMOTH frontman and visionary Nergal tells us: “Legions! For some of you, ‘The Apostasy’ is the ultimate Behemoth experience. Here, we present to you a song from that record which we filmed during ‘In Absentia Dei’. Enjoy it!”

Overdrive recently spoke to Nergal about plans for Behemoth, which you can access via this link. Catch Behemoth on tour with Arch Enemy, Carcass and Unto Others for a series of EU/UK dates next Autumn. Tickets are on sale NOW. Contact DME Promotions for details on the Irish date.

Behemoth will also be headlining the mainstage at Bloodstock Open Air in August 2022 alongside fellow headliners Mercyful Fate [Saturday] and Lamb of God [Sunday]. Tickets are on sale NOW via this link. 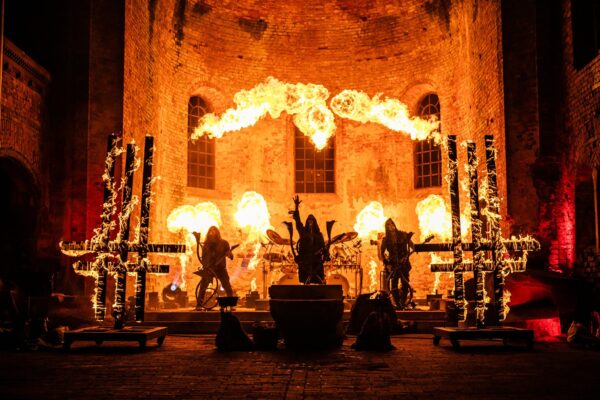