A band like Blackberry Smoke coming to Ireland for the very first time is really something very special indeed. The reason being is that, Charlie Starr and his “brothers” are exceptionally good at what they do and to see them in the intimate surroundings of Dublin’s Academy, was a moment that I will not forget any time soon. 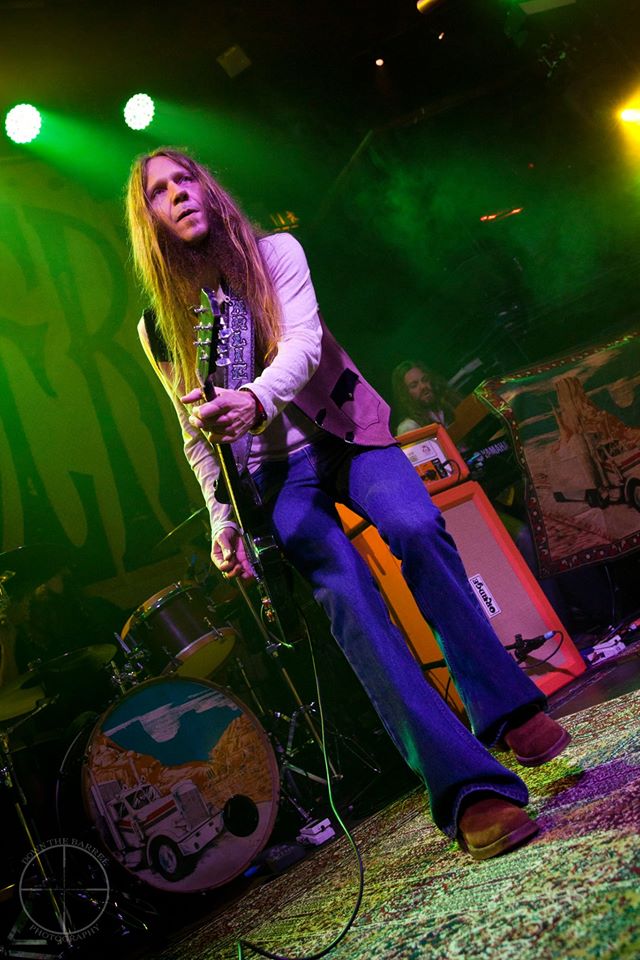 With a nicely packed main floor and a select few lined up around the balcony, Blackberry Smoke hit the stage last night with the first show of their Europe Tour, with effortless ease and some good old Southern laid back temperament, that immediately connected with the entire audience.

Opening song “Like I Am” comes across as smooth as a top shelf whiskey, with Charlie Starr commanding his beat up looking Gibson with relaxed precision, all the while displaying his outstanding virtuoso capability as not only as a guitarist, but as a vocalist also. Unbeknown to the crowd, the band had experienced some sort of technical problem during “Like I Am” and as Charlie asked us to wait for a moment until “we fix this fucking technical problem” in his delightful Southern drawl, the audience seem un-phased and ready to lap up what every Blackberry Smoke have to offer tonight.

Pushing on with “Testify” and the unavoidable sing along that is “Six Way’s till Sunday”. That priceless moment where band and audience connect, happened long ago at this stage and as the venue sings their hearts out with arms aloft and eyes closed, it seems to be going down a storm with the band themselves, as they are all exchanging wide eyed grins and nods of approval.

Considering that this is the very first time that Blackberry Smoke have played in Ireland, you can’t help but wonder, why did it take so long? What happens throughout the night is a fantastic, heartfelt setlist that transports the audience back to the dusty back roads of American’s South East. ‘Good One Comin’ On” and “Pretty Little Lie” come flowing out, like rich honey from the Queen’s private quarters of the hive.

As each song struts out of the bands set list, the Academy is slowly transforming into a sawdust sprinkled, Deep South back road drinking emporium, where the BBQ is tender and juicy, the beer is frosty cold and the world famous Southern hospitality is on tap for all to enjoy! “Crimson Moon, Sleepin’ Dogs, Everybody Know’s She’s Mine” and title track to the bands last record “The Whippoorwill” do the job and have everybody captivated throughout.

With few words from Charlie and the boys, they push on and get down to business with “Shakin’ Hands With The Holy Ghost” and stone cold classic “Up in Smoke” which see’s many tonight’s punters arm in arm and singing at the top of their voices.

What is staggering about Blackberry Smoke is the main man himself, Charlie Starr. Not only does he have a perfect tone and delivery of his lyrics, but the natural swagger of his guitar playing is simply outstanding. When his bell-bottomed legs reach for the wah peddle, the hairs literally stand on the back of your neck and I’m not the only one, as many of the crowd look at each other with that look of “holy shit” on their faces.

As the band work through the rest of their set, it is apparent that they have most definitely earned themselves the thunderous reception that greeted their entrance and now the rapturous applause that booms around the Academy on the closing notes of “Shake Your Magnolia”. Let’s hope that we will see Blackberry Smoke back on our shores in the not too distant future.  4/5

8. Everybody Know’s She’s Mine

10. Shakin’ Hands With The Holy Ghost