Bloodstock 2015 just got even more awesome!


With a line up that is just flat out ridiculous! The Bloodstock team have done it again with another truck load of bands that will no doubt cause your pants to get tight with excitement! Find out who will be joining headliners Trivium, Rob Zombie and Within Temptation for the best Metal party of the year! 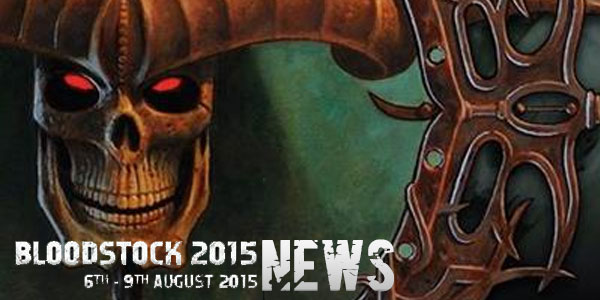 As January beds in, BLOODSTOCK HQ is a hive of activity. As well as setting up all the subscribers to the recently announced 2015 Deposit Scheme (see details below) and getting the Metal 2 The Masses heats underway, they’ve also been locking in more bands, this time for the Sophie Lancaster stage.

BLOODSTOCK are pleased to announce DELAIN as Friday night’s headliner. The Dutch symphonic metal band enthused, “We are really excited to perform at the awesome BLOODSTOCK Festival for the very first time this summer! Having written our previous records’ title track ‘We Are The Others’ about Sophie Lancaster, it will be an extra important and special occasion for us to headline the Sophie Lancaster stage and meet up with our friends at the Sophie Lancaster Foundation (“Stamp Out Prejudice, Hatred & Intolerance Everywhere!”) again. We look forward to rocking out at BLOODSTOCK and hope to see many of you there!” The group are currently touring Europe with BLOODSTOCK compadres SABATON, in support of their latest album ‘The Human Contradiction’, released last April via Napalm Records. Watch their latest video for ‘Stardust’ below.

Italian tech death metal kings FLESHGOD APOCALYPSE will be rolling in as Saturday night’s headliner, stating “We’re very happy to be part of this amazing festival for the first time. It’s a great honour for us and we can’t wait to crush one of the most important stages in the UK and Europe! See you all there mates!” The band are working on their follow-up to 2013’s ‘Labyrinth’ concept album, which will hopefully surface via Nuclear Blast before the end of the year. Meanwhile, check out this footage of the lads in full swing at Wacken last year.

Also appearing Saturday will be Swiss thrash metal band BATTALION. BLOODSTOCK is delighted to welcome the group back to Catton Park, following their first UK show at BLOODSTOCK in 2012. The four piece recently finished recording their third studio album and started the new year by sharing this live video of their whole set at Wacken last year.

Newly reformed Bay Area hip hop thrash funksters and Overdrive favorites,  MORDRED join the Sophie Lancaster stage bill for Sunday. The band are hard at work on a brand new album, which will mark their first new release in 20 years! You might have caught them on a brief UK visit last summer, following a triumphant Indiegogo campaign. Get a taste via brand new song ‘The Baroness’ below and the classic “Falling Away“.

Also stepping up for a Sunday Sophie slot are fellow Italians DESTRAGE. Signed to Metal Blade, their last album ‘Are You Kidding Me? No!’ guest featured GN’R man Ron ‘Bumblefoot’ Thal on the title track. Metal Hammer writer Stephen Hill declared it his 2014 Album of the Year. See why in the live video for song ‘Destroy Create Transform Sublimate’ below.

Not got your BLOODSTOCK tickets yet? The festival’s very popular deposit scheme, that allows you purchase your ticket in 3 installments, is now up and running! Festival goers have until midnight on 7th March to subscribe to the plan, with the initial payment being taken on the day of sign up. The deal breaks down as follows:

Payments will be debited automatically by bank transfer on the designated day(s), so the buyer doesn’t have to worry about accidentally missing a payment. Sign up at the following link and select the ‘Standard weekend with camping installment plan’ to get yourself covered. Get your tickets sorted here:

Please note that the deposit scheme is only available for regular weekend tickets with camping, though you can purchase a separate VIP upgrade at any time, subject to availability. If you want your ticket in hand right away, you can grab one now priced £135 (plus booking fee) for a 4-day Thurs-Sun weekend pass (with camping).

Already announced for 2015 are the three headliners; WITHIN TEMPTATION, TRIVIUM, and ROB ZOMBIE with his full production, plus special guests OPETH and SABATON, as well as a stellar undercard including the likes of CANNIBAL CORPSE, IHSAHN, SEPULTURA, ORANGE GOBLIN, DEATH TA, NUCLEAR ASSAULT, 1349, DARK ANGEL, ENSIFERUM, BELPHEGOR, OVERKILL, AGALLOCH, ARMORED SAINT, KORPIKLAANI, PRO-PAIN, and ENSLAVED. More bands will be announced in due course. Look up all the info on BLOODSTOCK 2014 so far over at www.bloodstock.uk.com.