With the summer festival circuit fast approaching, Overdrive’s eye is fixed firmly on this years Bloodstock Open Air Festival. The line up has a staggering collection of the most crushing heavy-ass bands that exists on our planet, and it just got a little more heavier!

The award-winning BLOODSTOCK is excited to announce yet more additions to the 2014 event! There are still even more bands to add in the coming weeks!

The mighty TRIPTYKON join the main stage bill on Friday. Having dropped much-lauded second album, ‘Melana Chasmata’ through Century Media Records last month, the band, fronted by Hellhammer/Celtic Frost visionary, Thomas Gabriel Fischer, make their second appearance at Catton Park, after first pleasing the masses back in 2011. If you like collectable editions, check out the delicious formats of ‘Melana Chasmata’ in their online webstore here.

The Sophie line-up keeps building with experimental/multi-genre metal outfit, OBSIDIAN KINGDOM joining Saturday’s bill. Hailing from Barcelona, the progressive five piece recently announced their signing with the uber-respected Season of Mist label and have been working on remixes for the likes of Cult of Luna and God Seed. For more info on the band, look up http://obsidiankingdom.com/ or www.facebook.com/obsidiankingdom. Check out the official video for ‘Ball-Room below.

Northern Ireland’s STORMZONE also join Sunday’s line up on the Sophie stage. The classic metallers released new album, ‘Three Kings’ in 2013 and you can check out the video for the title track below.

British black/death metal newcomers, STAHLSARG are also added to Sunday’s Sophie bill. The five piece are working on their debut album which is set for a 2015 release. In the interim, get clued up on the band by checking out www.facebook.com/stahlsarguk.

BLOODSTOCK 2014 is set to be the biggest and best yet! Friday night’s headliners are New Orleans sludgemeisters, DOWN. Joining them to head up Saturday are re-united black metal overlords, EMPEROR and closing out proceedings on Sunday are thrash legends, MEGADETH. Also on the bill are AMON AMARTH, DIMMU BORGIR, HATEBREED, OBITUARY, CROWBAR, LACUNA COIL, CARCASS, PRONG, CHILDREN OF BODOM, SAXON, FLOTSAM & JETSAM, EVIL SCARECROW, GRAVEYARD and many more. Even more bands and other cool on site things will be announced in the coming weeks.

For plenty of travel options to the festival, including details of coaches from all over the country with Big Green Coach, shuttles from local rail stations, and car-sharing with GoCarShare (which could even win you a pair of tickets for next year), visit: http://www.bloodstock.uk.com/pages/travel-info.

Tickets are available now priced £130 (plus booking fee) for a 4-day Thurs-Sun weekend pass with camping. VIP tickets and upgrades are also available. Look up all the ticket options over at bloodstock.seetickets.com.

BLOODSTOCK is held at Catton Park, Derbyshire on 7th-10th August 2014. Keep up to date with the very latest info on BLOODSTOCK’s official sites at www.facebook.com/bloodstock and www.bloodstock.uk.com. 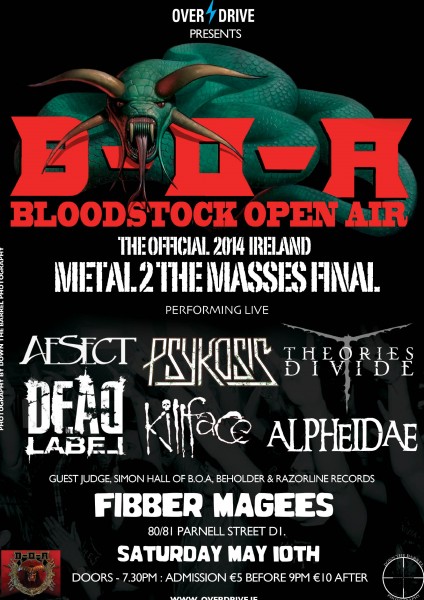 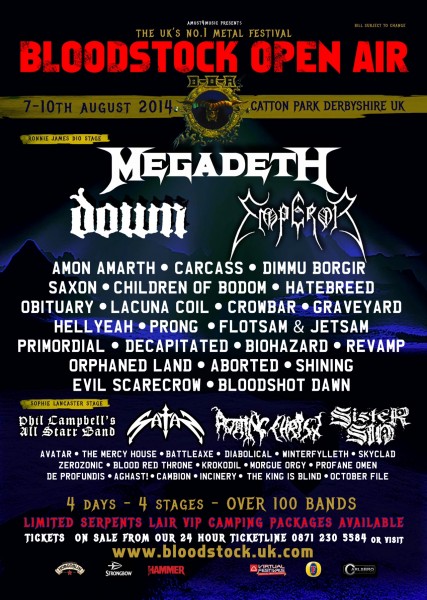