The festival that just keeps on giving!!! Yes, folks, Bloodstock Open Air have just confirmed more awesome additions to this year’s already bitchin’ lineup! Get up to speed below;

The Summers most anticipated UK metal festival is ramping up the excitement this morning with another handful of crushing live bands.

Belgian death metal kings ABORTED stride onto the Ronnie James Dio main stage on Sunday.  The band tell us, “BLOODSTOCK!  It’s been a while!  We couldn’t be more thrilled to lay waste to thee in the most offensive of manners this coming summer. Prepare my friends, the blastbeat is coming!”  Their current album ‘TerrorVision’ is blazing holes in our speakers over at BOA HQ.

The bands latest album “Devouring Mortality” shows how well SKELETAL REMAINS master the art of not sounding dated while being old schoolers at heart and is highly recommended to all fans of top-notch death metal!

Australian rockers, The Lazys will be landing on the Sophie Stage on Sunday. Their latest album ‘Tropical Haze‘ has been well received by the global rock community and will no doubt be a total banger for the Sunday!

Formed by Ministry/Rev Cocks/Lords of Acid guitarist, Sin Quirin, 3 Headed Snake is a face-melting powerhouse of old-school power thrash metal. This will be the band’s debut UK festival performance and you would be daft to pass this one by!

Boss Keloid make their return to Bloodstock with a Sunday slot on the Sophie stage. Hailed as one of the UK’s most exciting new metal bands, Boss Keloid will be delivering their trademark sonic apocalypse! What a way to spend a Sunday afternoon, eh?

German crossover thrash squad DUST BOLT will be tearing it up on Saturday with a slot on the Sophie stage.

The band recently announced that they would be releasing their fourth LP in early 2019 worldwide on Napalm Records. After Violent Demolition (2012), Awake the Riot (2014) and Mass Confusion (2016), this will be the bands awaited fourth album.

Red Method will take a Saturday slot on the Sophie stage with their intense Tech, Death, Progressive flavour of crushing metal.

Check out the video for “Messiah” below;

Making your travel plans yet and usually come by coach?  We asked you to let the good folks at Big Green Coach know if you wanted a new pick-up point in your town and if there was enough interest, they’d look into it.

They had such great response, they’ve added an extra 13 pick-up points for their BOA coaches! Travel directly from your town and get dropped off inside the BLOODSTOCK gates, bringing your camping gear and supplies with you!  Say hello to a total of 34 locations, with prices for a return ticket starting at just £32.

Head over to www.biggreencoach.co.uk/events/bloodstock-festival-tickets-coach-travel to book your seat or your coach + ticket bundle!

Big Green Coach’s services were hugely popular last year and many routes sold out in advance of the event, so please book early to guarantee your spot!  If you’re coming by train instead and need a shuttle ride from Lichfield City rail station to the festival site, Big Green Coach do those too, so click to their site to secure your place for just £10 (it’s more expensive on the day) and get ahead of the rush! 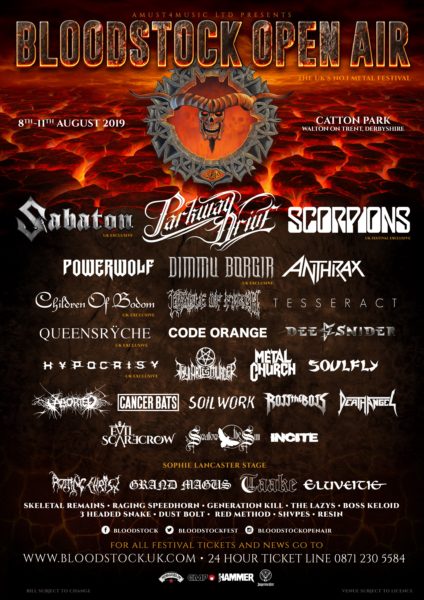