A return of soaring temperatures, a gargantuan slew of Behemoth t-shirts wandering the crowd, and anticipation of a mysterious secret band set to play halfway through the day, we continue on with day two of Bloodstock Open Air 2022… 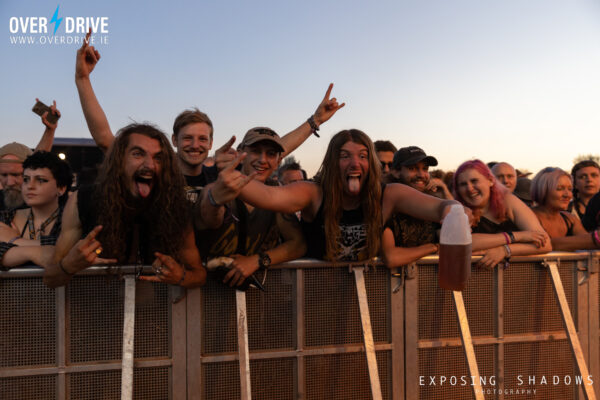 One of three bands opening the festival once again on this beautiful but melting day, costumed in their distressed looking clothes and face masks, Red Method return to Bloodstock (this time on the main stage) with an industrial-metal set.

The crowds are marching towards the sound of brutal vocals and squealing guitar solos. Vocalist, Jeremy Gomez jumps off stage with an intimidating look to hype-up the crowd for a wall of death – one way to get everyone pumped for the day ahead. Meanwhile, over on the New Blood stage, fresh-faced yet old-school influenced metallers, Hellfekted definitely have woken up their crowd.

The security are completely in over their heads quickly rescuing crowd surfers from falling over the barriers after the band created a giant circle pit amidst duelling guitar solos.

Grindcore mentalists Crepitation open the Sophie stage and don a duo of mixed vocals between guttural growls and high-pitched pig squeals, crazy bass tapping solos and ironic techno intros before crushing into brutal songs inspired by ‘getting the mental image of a giant penis jizzing all over the world‘ – inspirational.

Cruising through the day Heart of a Coward open circle pits with a generous crowd, Inhumane Nature bring an interesting blend of punk and death metal, including a cover of Judas Priest’s Breaking The Law which entraps a small crowd of bewildered looking gig goers in the middle of a large circle pit.

California’s crunchy and groovy death metal group Thrown Into Exile take the stage next, with vocalist Joey Dalo announcing “I wanna see violence – you guys have universal healthcare and we don’t”. Anders Engberg humbly announcing that this is the biggest crowd they’ve played to, Sorcerer brings a touch of old school classic rock, epic doom and to the main stage, with an older generation of metalheads pumping fists to the self-titled song The Sorcerer.

Standing out from the normal orange-peel-strand type of metal band logos on metal festival line-up posters, Party Cannon pull a curious crowd with their infamous choice of logo, and the theme sits aptly with half a dozen inflatable beach balls and sharks being thrown within the pit.

The New Dehliers have impressively mixed traditional Indian instruments into their blend of hardcore and death metal, and vocalists Jayant Bhadula and Raoul Kerr take a moment to pause between songs to give encouraging speeches about overcoming issues such as depression, sexual abuse and political corruption.

There have been rumours spreading all day over who the secret band on the Sophie Stage will be, with theories being Amon Amarth, Emperor, Gojira, and Evil Scarecrow.

The anticipation of crowd go-ers gather a gigantic mass outside the tent with people who didn’t stick to their spot after Party Cannon easily losing their place – the closest a person who just showed up could get was a measly 30ft outside of the perimeter of the tent.

Some of the theories were true, due to a slip of the tongue courtesy of drummer Chris Kontos on a recent live streaming of a Machine Head show that was immediately caught and dismissed by McClain – the band indeed did take stage to an eruption of joy and surprise from many in the crowd.

Giving a proper report of the show is impossible as there was absolutely no way of getting inside the tent – a reflection of approval from the crowd. It boggles the mind how all the Gwar members (and not to forget their guinea pigs) are capable of functioning in their costumes today, but they do – and they pull off a hell of a show, which includes Mr President, a self-proclaimed redneck, a seductress and a keytarist who can only communicate through the method of music, among others.

Of course, all this included the crowd being sprayed in blood during each song – and they wouldn’t have it any other way.

On the opposite side of the arena, the equally questionable themed hardcore punk outfit Discharge are pulling in more battle-vests and topless men than anywhere else in the arena. A collide in the line-up may have left a difficult decision for people to decide who to see;

Exodus took to the main stage at the same time fellow Californian thrash metallers Heathen donned the Sophie stage – however the sun may have become too much for some punters as the crowds were smaller than expected.

A quick peep into the Welfare Tent showed many people on gurneys trying to recuperate after todays festivities, as well as people walking away from the arena to seek shade that hadn’t already been snatched up.

Over on the New Blood Stage, Metal 2 The Masses Ireland winners, Fornoth are causing all sorts of damage with their infectious Death Metal gallop. Imagine Amon Amarth locking horns with Mastodon and Agalloch and you’ll be close to what these guys are capable of doing. 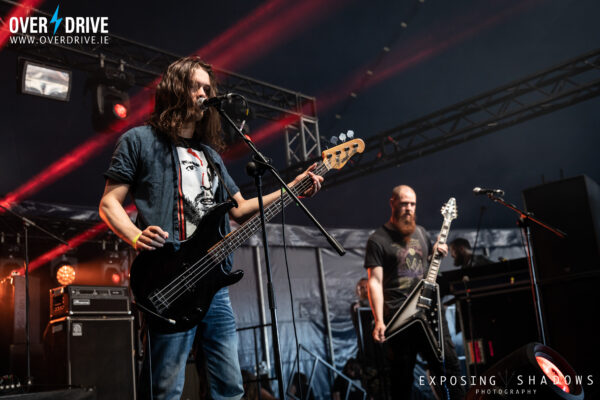 Despite its size, the Jager Stage is notorious for pulling enthusiastic crowds and Syncolima do exactly that with a blend of groove metal and screeching vocals. Certain Death arrive on stage after, their fast paced hardcore/punk creating a mosh pit of… people sitting down rowing an invisible boat.

Behemoth wrap up the night on the main stage with a huge display of smoke, pyrotechnics and multiple costume changes to correlate with a diverse setlist containing old favourites such as Conquer All, and new release Off To War!.

The band keep their renowned stage show of quasi-ritualistic hand formations and props – with a giant upside-down tri-crucifix bursting into flames when Nergal mentions Christianity. A giant explosion of confetti erupts at the end of the set, leaving a beautiful snowstorm of black paper raining down on the crowd. 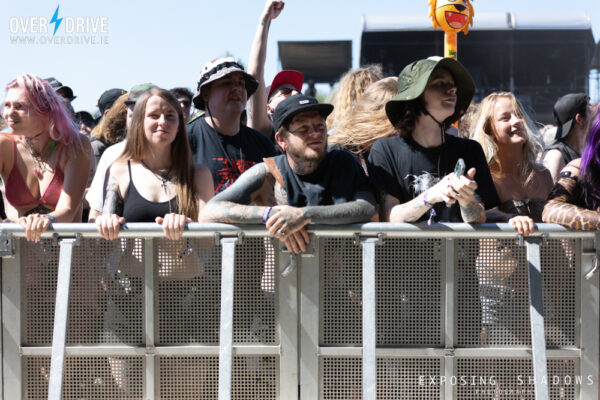