Ladies and Gentlemen! Start your engines! Another year has made its call to the unsigned metal underground and Overdrive, in association with Jetrocker Events has finalised the lucky list of hopeful bands eager to play the New blood stage at Bloodstock Open Air in Catton Park in August. 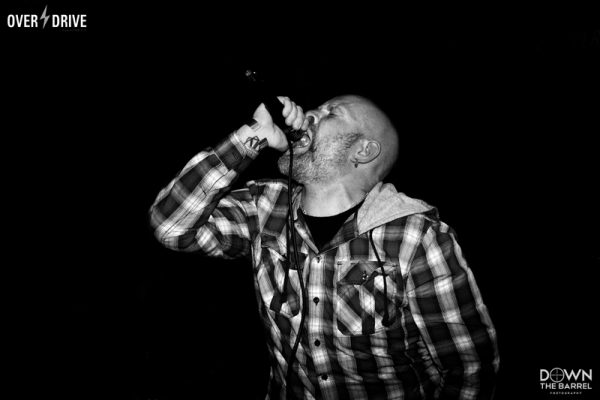 The frenzy for this is always hardcore: bands from all over Ireland apply, but only a few make the grade. But at the end of the night, 2 bands will proceed to the next round. Overdrive’s Shaun Martin was back in the saddle telling us what happened.

Kicking off with a soundcheck at the stroke of 8 pm, the first roll of the dice goes to Pethropia from Cork. Thrash, prog and death metal fusions are supplied by Luke Horgan (bass), Ryan Coughlan (guitar), Chris Daly (vocals), and Jamie Ryan (drums). 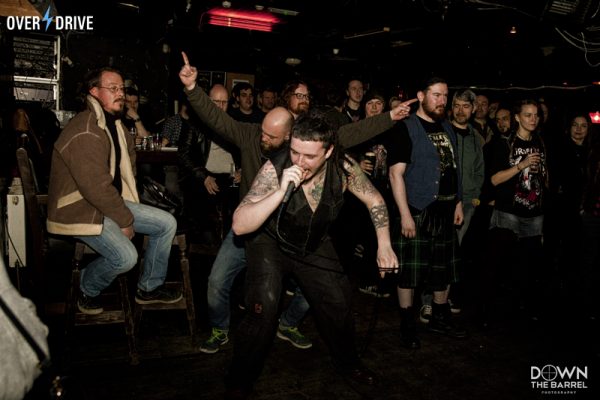 The first screeches of “Dead Man’s Hand” has a gut-busting ferocity which sets the pace for the rest of the setlist. Daly’s lyrics sound like they have torn been from the underbelly of Satan himself and 30 seconds into the night, we see that this is already high-octane stuff. The shred solos are supplied by Coughlan but seem a bit too fast for the tempo of the songs that they play. Nonetheless, they are overwhelmingly impressive. Daly enjoys a lot of…. shall we say… ‘unusual’ crowd interaction, as his amorous attentions are consistently drawn into the audience with several members. Pethropia isn’t above soft and gentle, though – their second song “Uroboric” starts off slow and graceful, but picks up the gallop pretty soon and evolves into a monster riff-assault. For the first band on stage tonight, and indeed in M2TM 2017, this is gonna be a wild ride!

Next up is sludge-doom enthusiasts Raum Kindom. The vocals of Dave Lee are absolutely mindblowing. His ability to blend soft and subtle, with lycanthropic fury at the drop of a hat is mesmerising. As soon as the lights go down on the stage, drummer Mark Gilchrist is the only illuminated figure… the other band members (Ronan Connor on bass and Andrew Colohan on guitar), along with Lee are offside in the shadows. Their 3-song set of “Struggle”, “Rebuilding the Bridge”, and “Lost in the Hunt” seems like an effortless and gleaming transition between the slow, quiet, clean and elegant song structures, to the brutal crushes of distorted bass, heavy guitar riffs and thunderous drums, and adding Lee’s prowess into the mix is nothing short of sheer titanium. It’s excellent stuff. 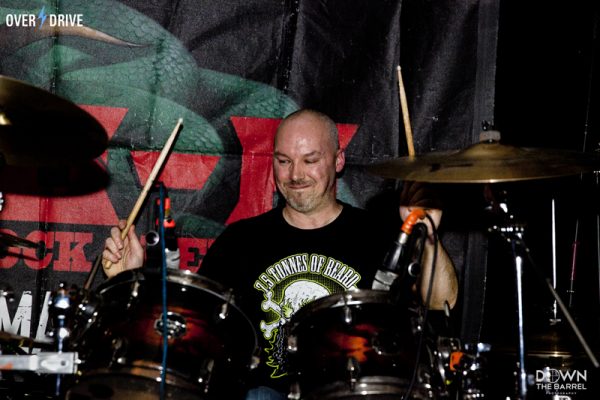 Raum Kingdom basically makes it look easy to do everything in one of the most musically complex and underrated genres in modern metal. A real eye-opener to just how high the bar is in this contest.

Starting a little later than billed, Freemen take the stage with their off-beat, energetic and modern metal blazed flair. Hints of nu- and alternative metal pepper their songs and the audience love it. As of now, the competition is kicked into high gear. Vocalist, known only as Prospero, assumes a stage presence and persona of an old pro at this game, and the most obvious thing we notice from the judge’s desk is the level of comfort that Freemen has whilst onstage. 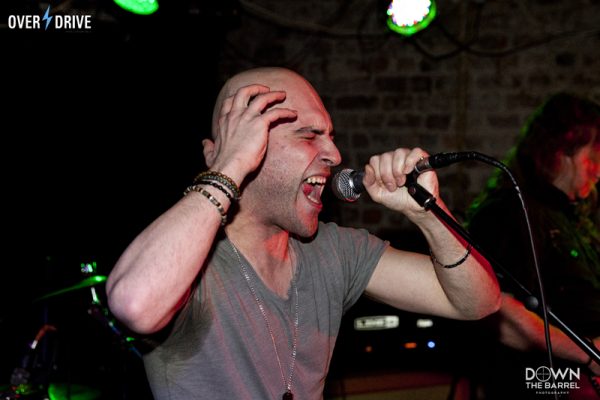 You don’t get that overnight – that takes a long time to get. I will only say that Prospero (who is a serious frontman and takes the job seriously), has slight difficulties reaching the pitches that the songs demand. I don’t DARE take away from the performance, though, as the riffage is served up in chunky slabs that smash you across the head. Guitar titan Mirek slays the solo spot, and all eyes are on him when he struts his stuff throughout the 5-song stretch, and I hope to see Freemen again on the stage. As always, M2TM bring bands out of the underground and pushes them into the light. Freemen are gonna shine.

Galway has always been kind to the metal family in Ireland, and the troop from Na Cruithne is no different. Folk metal as Gaeilge agus Béarla  (in Irish and English), has always been a niche area in M2TM, the only other band daring this was Corr Mhona, another M2TM veteran. Na Cruithne is basically Ireland’s non-professional answer to Turisas. 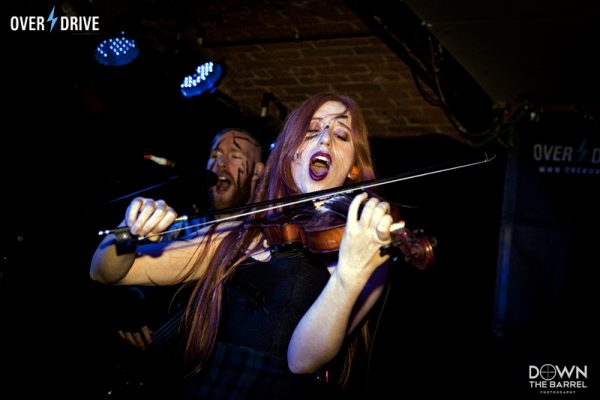 Singing in both English and Irish, the band’s setlist comprised several tunes in our native tongue and the addition of folk instruments like the fiddle and feadóg add flair to the seriously heavy songs. Frontman Maitiú Ó Héanú is positively animalistic in his stage presence – basically giving the vibe that he is not one with whom you are to fuck with. His 6 counterparts deliver the liveliest setlist of the night yet, and the floor is full. This is obviously a band that lives and breathes its music, as the level of technique and airtight delivery is evident. They bring their merch with them to Dublin, as each t-shirt sends another band 20 miles down the road. This band should get 200 miles on merit alone, because the Celtic fury witnessed here is screaming volumes, and reeks of hard work and sweat. 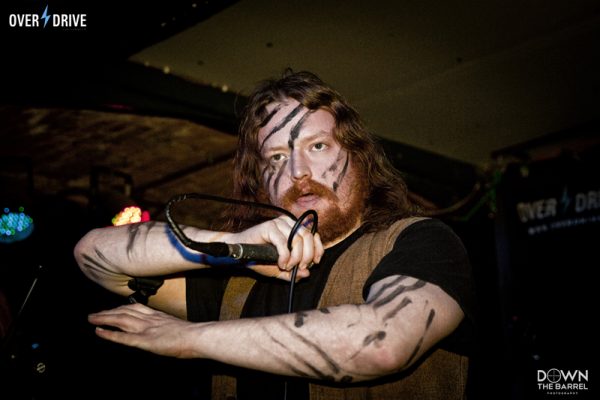 The last band to roll up is hard rock ballbusters Dissension Rising from Naas, Co Kildare. The 5-strong team headed by petite Danni Carroll is hugely entertaining, as Carroll’s stature is deceptive. Her voice is a soulful powerhouse, and full of deep, bassy sass and would rival many a professional Motown singer! Thank God she chose rock music! 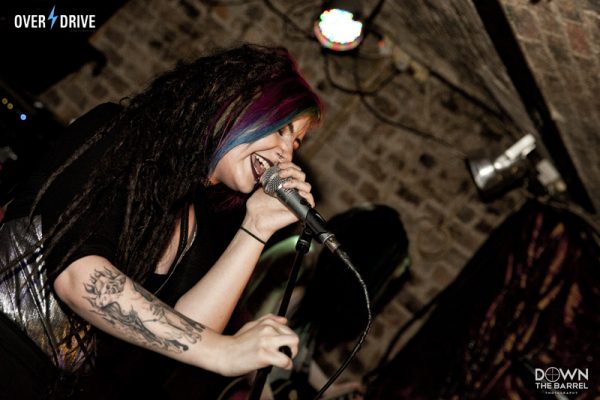 They have filled the venue with their supporters – let this be a heads up folks: GET YOUR PEOPLE HERE!! Votes are votes, and it doesn’t matter who they come from. If they support you, they support you, end of! The guitar licks are laid low and loud by axemen Keith Garrett and Rob Higgins. A slight tech malfunction with an amp delays them not, as the show must go on. This is another band born for the stage and we can expect to see Dissension Rising on a bigger stage fairly soon. They recently finished up a US tour and are heading out on the road again soon. A monster of a band and it has a bright future.

So after all the votes have been counted and judges arguments have ended, the crowd vote goes to Freemen, and the judges vote (narrowly), goes to Na Cruithne, It’s been a few months since we have sat in front of bands fighting it out to get to BOA, so it’s easy to forget the difficult decisions of who to send to the next round. But the fight never ends – only one can emerge victoriously and we are ready and waiting for the next attack. The stage is set folks. The next heat is February 4th in Fibber Magees, and the bands have already been preparing for the fight to get on the New Blood Stage, to join the likes of Ten Ton Slug, Animator, and Psykosis.

Check out the full photo gallery from Metal 2 The Masses Ireland– Heat 1 below. All images – Down The Barrel Photography © 2017

Bloodstock Metal 2 The Masses Heat 2 takes place on February 4th in Fibber Magees (click the graphic below for the official event link) and the bands have already been preparing for the fight to get on the New Blood Stage, to join the likes of Ten Ton Slug, Animator, Psykosis and 2013 winners Warpath.

BLOODSTOCK will take place at Catton Park, Derbyshire on 10th-13th August 2017. Standard weekend camping tix are on sale at £139 (plus booking fee), plus limited VIP packages/upgrades and car parking tickets (at a cheaper price than ‘on the day’ purchase) from this link. Children’s weekend tickets are also available, priced £35 (+ booking fee). Campervan pitches have now SOLD OUT.

For all the latest on Bloodstock Metal 2 The Masses as well as updates on the festival itself, check out BLOODSTOCK RADIO! You can access the latest episodes on the graphic link below. This week, you can get all the latest from Evil Scarecrow, Jackknife Seizure, Testament, Animator, Monsta Ents. and Ten Ton Slug amongst others!

The show starts at 8 pm on Wednesday, Feb 1st (today)! 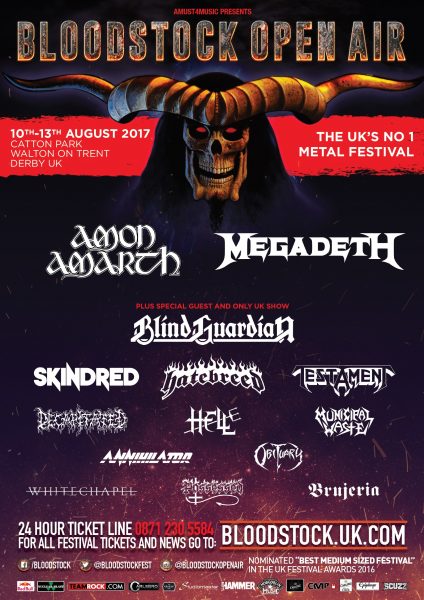