With only a few heats left to go, the competition is starting to really heat up. The list of bands that are already in the semi-finals are major contenders for the Bloodstock Open Air Festival this August, in Derbyshire, UK. Bloodstock supremo Simon Hall will fly over to specially hand pick the band in the final on May 13th to play at the festival. With less than 7 weeks to go until another Irish band is crowned this year’s champion, Overdrive is in the pilot seat seeing what happens along this journey. Shaun Martin sends word back from Fibber Magees on what happened. 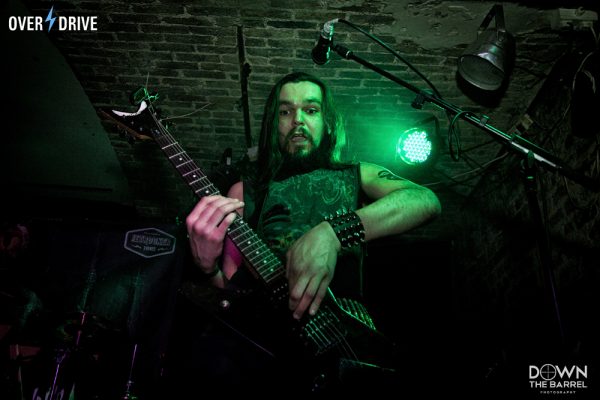 M2TM veterans The Devil Wants Her Swagger Back are once again in the eye of the storm. Finalists from 2015’s campaign, the metalcore heavyweights start the night in nothing less than perfect form. Having seen this band a few times, I have come to expect a top class performance each night I see them, and they never, ever disappoint. Delivering a firm kick to the gut, vocalist Stephen Cannon is in his element, supplying the front line of assault in charge of one of the heaviest bands in this year’s competition. 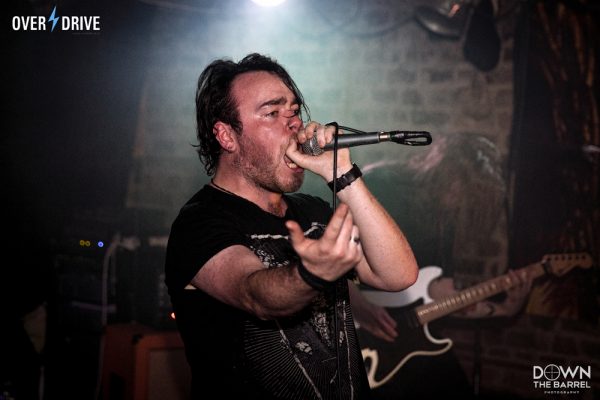 As soon as the first beat is dropped, each member’s head starts banging and doesn’t stop until the gig is over, and the audience follows suit. The floor rumbles, the air is thick with devil horns, screams,  and sweat (it is seriously hot in here tonight), and TDWHSB are taking no prisoners. The mastery of their sound is enviable, and only a handful of amateur bands can beat what they do. The sheer brutality of their songs like ‘Toothless’, Violence and Ruin’, and their latest tune ‘End Game’ are a force to be reckoned with, as they light Fibbers on fire and walk away from the inferno. Game on.

Following TDWHSB are another M2TM finalist veteran, Alpheidae. Halloween was the last Fibbers outing for Alpheidae, and they throw both new and old songs at us, including ‘Altruist’ from their first EP release “The I in All”. Frontman Calvin Singleton is decidedly maniacal in his pinpoint delivery of what can only be described as responsible excellence personified. He takes his job quite seriously. Having said that, the presence of ‘Spiderfingers’ Ros Coghlan is something else, with 7-string wizardry front and centre. Strutting his stuff on his trusty 7-string, he lights up the runway with awesome solos and guitar fills that make up the bulk of Alpheidae’s signature sound. 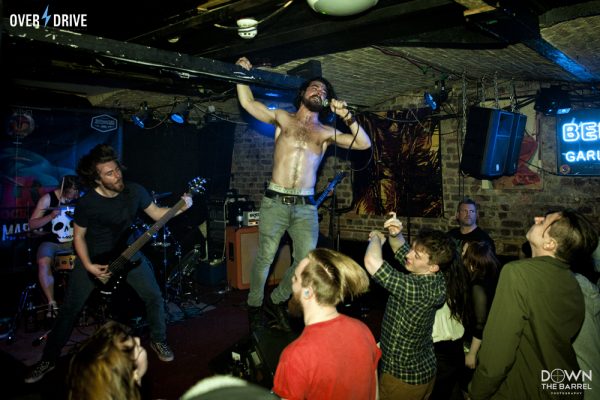 Couple this with a partnership with Leon Burke on rhythm guitar and the results are superb. Harmonisation meets flawless timing, giving the axemen a shelf on which to stand among some of the best guitarists in this competition. Singleton has the sustained growl to bump up the aggression factor and throw in a beautiful drum and bass section with Zach Parkinson and Gavin Wynne respectively, and you have a mix of some of the best elements of prog/metalcore in Ireland. 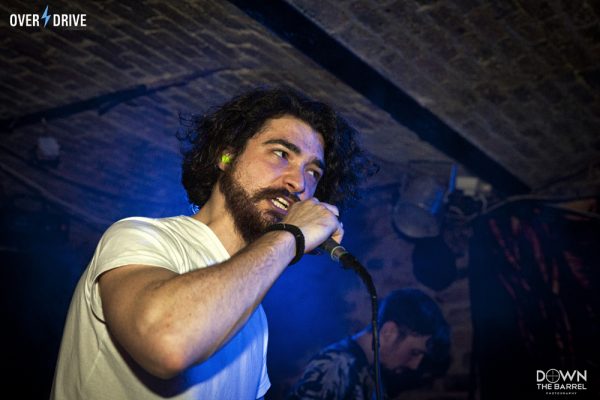 Hot on the heels of Alpheidae, are Dublin thrash outfit Catastrophe. From out of nowhere, Catastrophe have arrived slap bang in the middle of a clash of titans in M2TM and are holding their own. Vocalist Jamie Murphy conducts a jam-packed floor of bodies, and the pit doesn’t take long to reach full malevolence. Guitars supplied by Gordo Casey and Adam Treacy show heavy influences of Slayer, Exodus, Anthrax and Testament, as do drummer Connor Middleton and bassist Daragh O’Connor. 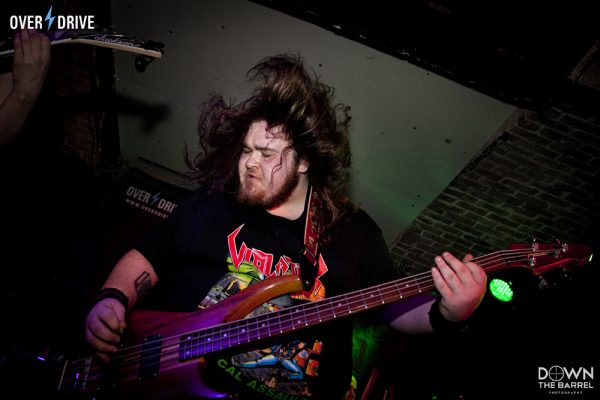 Pit action is furious, as the stage diving commences for the first time tonight. Mega-movers ‘Propaganda’, ‘Terror Campaign’ and God is Gone’ create some of the most hardcore floor action that the audience has partaken in. Middleton is a hive of activity tonight and is at times, just a blur of arms flying between toms and cymbals making it a little hard to keep up with what he’s at. Unlike their name suggests, Catastrophe are far from a catastrophe, and their thrash injection is a vital ingredient to the adrenaline-pumped crowd who have packed out the venue on this already crazy night. Overall a high energy performance but noticeably sloppy at times, which needs to be addressed now that the all important and unforgiving semi-finals are fast approaching next month.

Last up tonight is Subsist, the dark horses of tonight’s show. Metalcore/deathcore from Dublin, this unique 5-piece throw a mix of old-style death metal and new fragments of Irish style metalcore. Daniel Pannett towers over all in his role as lead frontman and is backed up on guitars by Aran Byrne and Mark Green. Drummer Ricky Shortall has his work cut out for him keeping up with the note change and manages it superbly, keeping in time with his backbone counterpart Jake Deverill on bass. 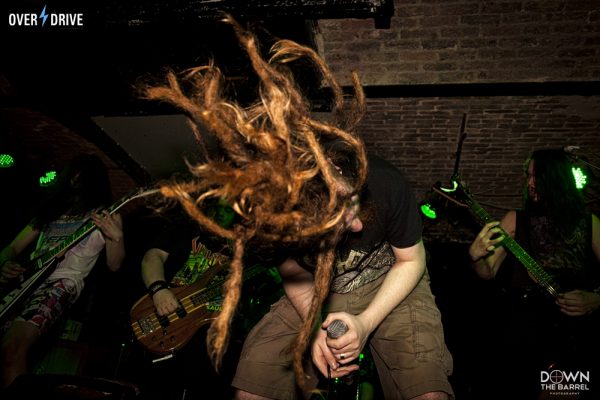 There were a few tuning problems at one point, but this is quickly rectified, as Subsist unload an immensely powerful setlist. Hard-fought tunes like ‘Psycho’, ‘Guessing Game’ and ‘Set Free’ flow freely and the band are all smiles as they enjoy their setlist, another hard-working band from Dublin’s underground scene who love what they do. As the night wears on, the sweat drips from those who are left standing at the end of the night, and applause is deservedly given to Subsist to keep people on their feet for the last slot of the night. 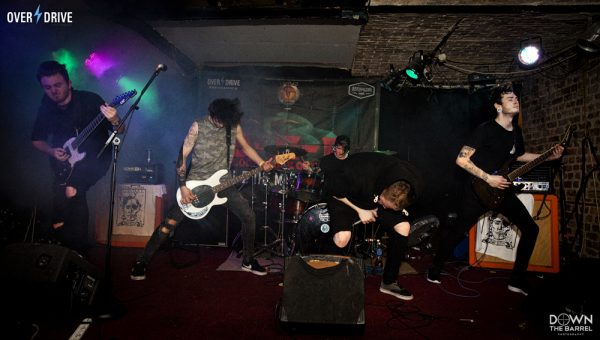 The judges are always a bit edgy at this point. There have been so many bands that could play in the M2TM final tonight, let alone the semi-finals, but Catastrophe run miles ahead with their thrash assault to get the crowd vote. The Devil Wants Her Swagger Back pip their counterparts to land the judges vote, but that was a very difficult decision to make.

Bloodstock Metal 2 The Masses – Heat 7 will be taking place on Saturday, March 25th with performances from Call To Arms, Sixth Extinction, Svet Kant and Xerosun. This will be the final heat before we enter into the nail-biting semi-finals in April. Click on the graphic below for the official event link.

Tune into Bloodstock Radio every Wednesday at 8 pm for all the latest on the festival as well as exclusive interviews and news on all 28 Metal 2 The Masses. Click the link below for the official link.

Tickets for Bloodstock Open Air 2017 are on sale now at this location. Headliners, Amon Amarth and Megadeth will be joined by Testament, Municipal Waste, Skindred, Blind Guardian, Hatebreed, Hell, Annihilator, Decapitated, Possessed, Kreator and much more. Lasting four days, Bloodstock will offer over 100 bands across 4 stages. VIP tickets are now SOLD OUT, so best to get your weekend ticket locked down today.