Easter weekend brings out legions of Irish metal heads to Dublin’s Fibber Magees for the first of three semi-finals that will see a total of six finalists who will take to the stage on May 13th for the Bloodstock Metal 2 The Masses Irish final. 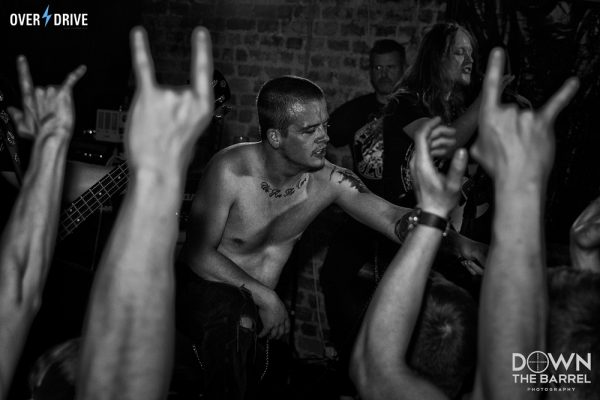 Tonight the air hangs heavy with anticipation for the awaited performances from Call To Arms, Creep, Sectile, Mother Mooch and Sixth Extinction, who all have Bloodstock in their sights.

First to take the stage are CREEP, who waste not time in jolting the crowd into a festive mass of banging heads and horn throwing. Fronted by the powerful vocal talents of one Jason McGuinness, CREEP has a sound that is bathed in shades of Alice In Chains, albeit with their own twist. With all eyes fixed on the topless bassist, James Kearney, the crowd gets an ‘up close and personal’ experience, as he can be found at the back bar slugging on a pint and later stripped down to a thong surfing the venues pool table during the bands 3o minute set. 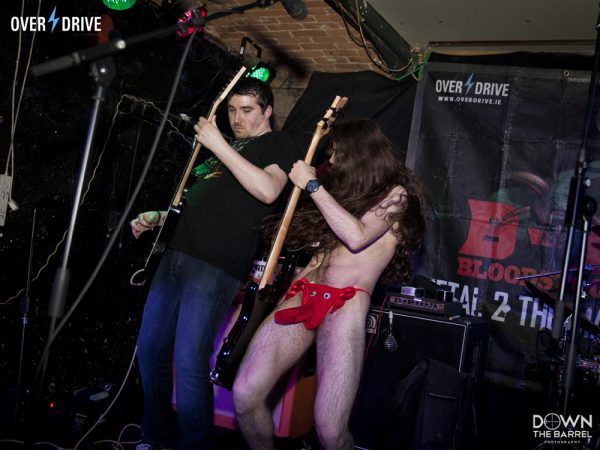 Although CREEP’s set is a little rough around the edges at times, their performance steadily gathers momentum and focus with each track, before they lay one last knockout attempt to win over the throng of punters who continue to pour into the already packed venue.

Not a bad start to the night by any means, but with another four bands gearing up to make their impression on the crowd and judges panel, there is no doubt that we are in for one serious display of quality Irish rock and metal. 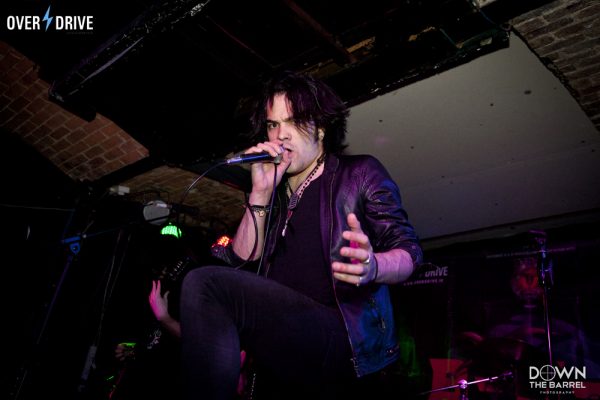 As SECTILE prepare to launch their attack on the senses, it’s apparent that these guys have already managed to drum up a considerable following in their short legacy (six months to be exact). Vocalist Gabrial Gaba’s range is truly a gift from the God’s, as he leads his bandmates through a setlist of hard rock bangers, that at times have the faint stench of AlterBridge about them.  With a few dips here and there, SECTILE seems to fire on all cylinders when hammering out their upbeat tracks, rather than the slower compositions.With a new collection of songs getting an airing tonight, the Dublin-based five-piece waste no time in flexing their muscles in the attempt to win over the

With a new collection of songs getting an airing tonight, the Dublin-based five-piece waste no time in flexing their muscles in the attempt to win over the Metal 2 The Masses crowd and it’s clearly working, as votes come pouring in during and after they have finished destroying the venue. Definitely, a band to watch in the coming months, as they have already shown an immense amount of quality in such a short space of time.

For more information on SECTILE, please visit this link.

Having made a big impression on the judges during their last performance, Clonmel natives SIXTH EXTINCTION declare their intentions by way of ‘ we’re gonna rip you a new one’ and proceed to do precisely that. With original drummer Grzegorz Skowroński unable to play, the five-piece storm their set with help from a stand in drummer, who does an impressive job. The low end that SIXTH EXTINCTION achieves at times is delightfully crushing and packed with a freshly boxed swagger that can transport you back to some of the finer bands of the early naughties, such as Soil and others alike. 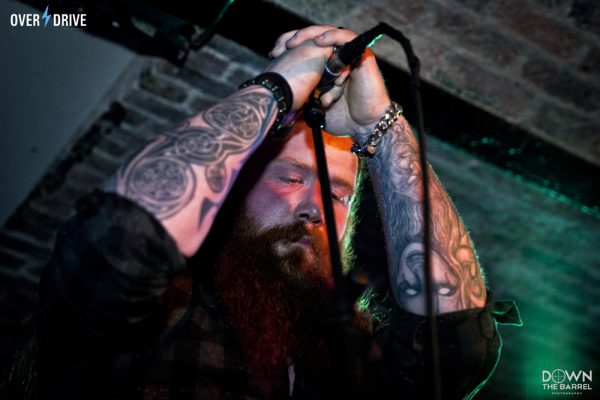 Vocalist Liam Ryan sways between a chunky deep range to mountain rattling roars, as they tease out each track from their engaging performance. If you haven’t had the pleasure of witnessing these guys live, you need to change that at the first chance given. There is no doubt in my mind that SIXTH EXTINCTION are going places just make sure you get on board before they take off! 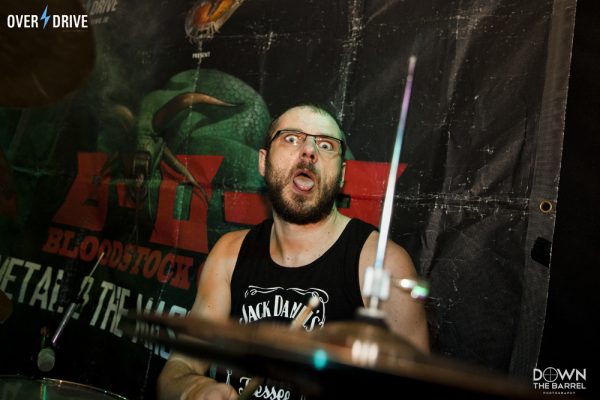 With Fibber Magees now bustling with punters and fellow band members, the fuzz-out sounds of MOTHER MOOCH cascade from the house PA in a wash of green stage lights and dry ice. The sizeable crowd squeeze towards the stage and get sucked into a wormhole of delights fronted by the captivating Chloë Ní Dhúada, who holds the center stage with ease and confidence. Drummer, Danni Nolan is a pleasure to watch, as she hammers out the very beating heart of MOTHER MOOCH with meticulous passion and unwavering groove. 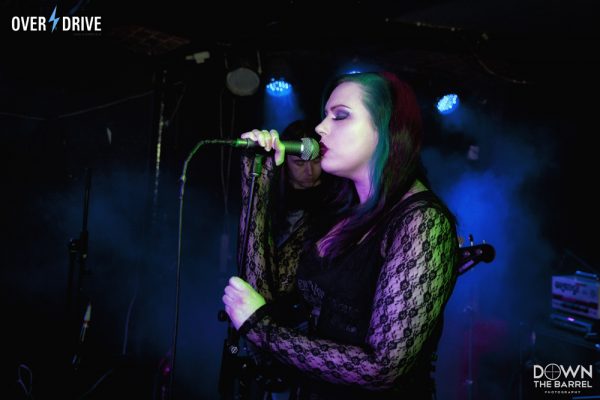 With a setlist laced with nuggets of their self-described brand of Psychedelic Doom Grunge, MOTHER MOOCH leads tonight’s crowd down a dark and delightful path with their intricate compositions and natural swagger. A great band that are quickly making a name for themselves not only in Ireland but also on the international stoner/doom scene.

Get you fix of MOTHER MOOCH from this location.

The final band of the night are no strangers to Metal 2 The Masses Ireland. CALL TO ARMS have been throwing around some pretty impressive fighting over the last few weeks and now is the time to see if they can back it up. From the get-go, the band literally crack the venue from the stage to the back wall as they unleash pure fucking hell to the baited crowd. Wall’s of death, circle pits, and ferocious frontline activity unfold at the lip of the stage under the command of frontman Dean Donnelly, who is already shirtless and dripping in sweat and it’s only their first track. 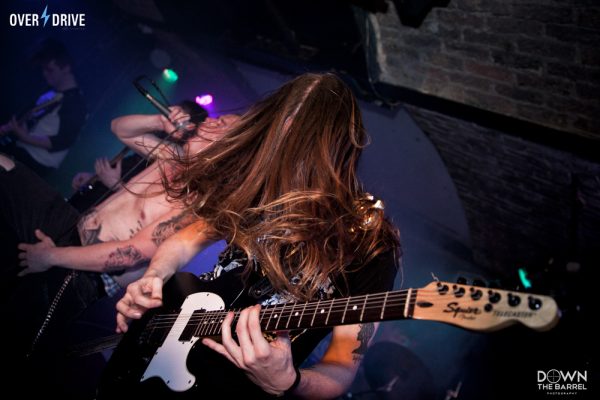 Although CALL TO ARMS has been guilty of sloppy performances from time to time, tonight they are in fine form and seem to be focused withing an inch of their lives. Having seen them many times in the past, there is no question that these guys have a tremendous amount of determination and perseverance, which is finally beginning to pay off.

Closing tonight’s celebration of Irish Metal are the mighty TWO TALES OF WOE, who instantly bring the heavy groove stylings to Fibber Magees with opener ‘Burning Lands‘. With each performance, the ‘Woe’ just seem to get better and better. Having been hand chosen as openers for Crowbar’s Irish dates last month, the four-piece consisting of vocalist Carl King, bassist Christian de Brabandere, guitarist Dan Walsh and drummer Kelvin Doran are fast becoming one of Ireland’s hottest metal exports, as they are in firm demand in the UK, to which they have toured many times over the last year since their Bloodstock performance in 2016.

Speaking with Carl earlier that night, I was informed that the band have tapped a rich vein and are currently hammering out an impressive amount of new material that will most likely begin to appear in their setlists in the not too distant future. Keep you eyes firmly locked on TWO TALES OF WOE as they are set to dominate the Irish metal scene over the next 12 months.

As the judges count up the voting slips, there is an astounding amount of pressure concerning the all important judge’s vote. With SECTILE narrowly running away with the crowd vote, a heated debate gets underway before settling on CALL TO ARMS as the favorites.

After a night of blistering metal and a small window into the vast array of mind-blowing quality metal bands that Ireland has to offer, the crowd disperse into the night and prepare to do it all again next Saturday, April 22nd for the all-important semifinal B round  with scheduled performances from ANTIDOTES, CROOKED EDGE, CATASTROPHE, TENSION HEAD, ZHORA and exclusive special guests ANIMATOR. For more details, please click the graphic link below.