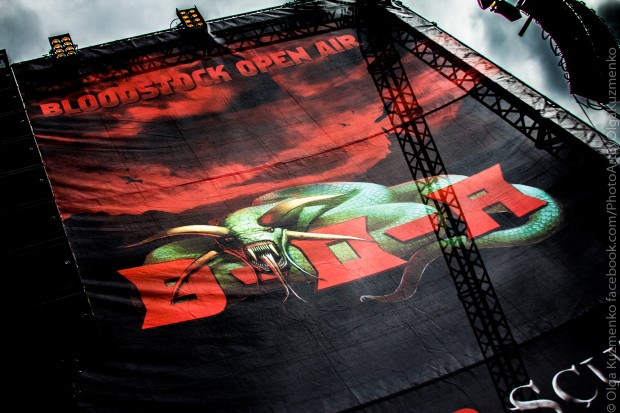 Bloodstock Open Air Festival. Catton Hall, Derbyshire. August 8th to 11th 2013. Since its launch in 2001 as a one-day indoor festival, Bloodstock has grown to become the UK’s biggest independent metal festival. This year’s festival saw more than 100 rock and metal acts perform in front of 15,000 people.

With just a few acts, including TRAGEDY (a heavy metal tribute to the Bee Gees), warming up the festival on Thursday evening, the festival really kicks off on Friday. Bay Area thrashers DEATH ANGEL take to the Ronnie James Dio main stage at midday to play their first UK open air festival. There is an enthusiastic ambience, and thousands of fans are already soaking up the sun, metal and festival atmosphere. 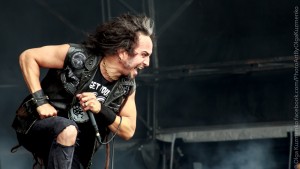 Dublin based brutal death metal band WARPATH, who won their slot at Bloodstock in the Metal 2 the Masses competition in Fibber Magee’s last month, played on the New Blood Stage. Unfortunately, due to another band arriving behind schedule, they were asked to play an hour earlier than the advertised time, and we missed their performance. Well done to the lads for saving the day, but it was a shame that many of their Irish fans missed the show. From their facebook page: “We had an epic time on stage regardless and had a great crowd by the end of the set so we all got off stage with smiles on our faces. But we hope we can get back to The UK and Bloodstock again!” 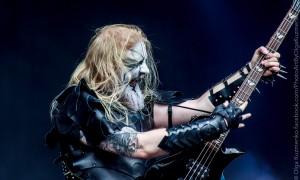 A consolation for the disappointment of missing Warpath is that we get to see Swedish black metal band DARK FUNERAL perform on the main stage instead. Wearing body armour and aggressive looking face paint, they scowl at the crowd while singing about anti-Christianity and Satanism. The crowd raise their devil horns high in submission.

Friday night headliner KING DIAMOND puts on a theatrical show from an elaborate church-themed stage brandishing his trademark bone-handled microphone. He obviously has his dedicated fans here at the festival, but his characteristic high-pitched vocals are not to everyone’s taste; and the thinning crowd reflects this. 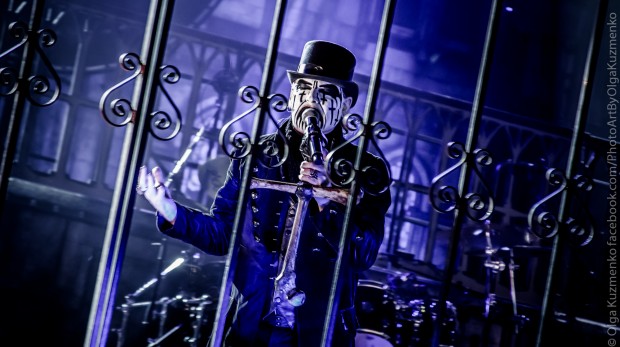 Aside from the plethora of bands performing throughout the day, there is plenty of alternative entertainment at the festival including fairground rides, bars, copious food stalls and even medieval battle re-enactments. Many revelers have made extra effort to dress up in superhero costumes, wedding dresses and mankinis. The 4 DJs of the Apocalypse keep the metal flowing into the early hours at the disco in the Sophie stage.

On Saturday, 3 INCHES OF BLOOD take their power metal to the main stage. From Vancouver, British Columbia, they are influenced by old school metal bands like Manowar, Dio, Scorpions and Judas Priest. The crowd form circle pits and seem to enjoy the performance. 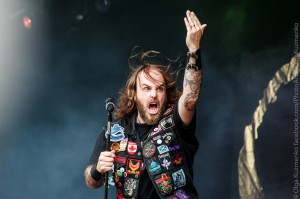 Next on the main stage are HELL, a band formed here in Derbyshire in 1982, but who only released their first album in 2011. Vocalist Kev Bower, dressed as a post-crucifixion Christ, performs dramatically amid fire-breathing gargoyles and religious props. Their music has been influenced by a mix of Thrash, Power, Speed, Doom and Gothic metal. 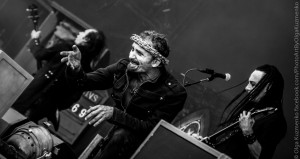 Next on our agenda is another successful Irish band who are due to perform on the Sophie stage. Not wanting a repeat of our Warpath experience, we go there early and are lucky to catch the entire set of Egyptian death metal band SCARAB. They look like they have just stepped out of Tutankhamen’s tomb with dirt-washed skin, Pharaoh-style eye make-up and Ankh pendants. Although not particularly well-known, they have drawn a large crowd to the second stage, and the evil growls of vocalist Sammy during and between songs preach their anti-authoritarian views to the fans. Their “words of truth” hand-written on the Egyptian flag hanging from centre stage have poignant significance considering the volatile state of their homeland on the brink of civil war. 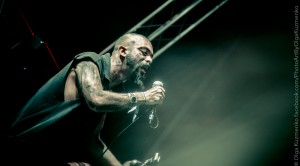 Gaelic doom metal band MAEL MÓRDHA are up next on the Sophie stage and perform their Irish folk inspired songs complete with Viking horn and tin whistle solos. Front man Roibéard jumps off-stage to get up close and personal with the front row fans on a number of occasions, some of whom are also dressed in Viking garb. He ends the show with a “Slán agus beannacht” to them. 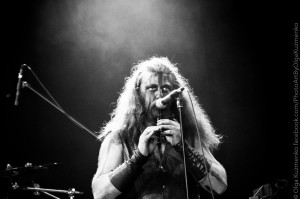 Back on the main stage, French progressive metal act GOJIRA put on a blistering show, despite a lot of their equipment getting lost in a Paris airport earlier in the day. Lamb of God front-man Randy Blythe even joins them on-stage for a song. Next up are Swedish power metal band SABATON. Their charismatic front man Joakim explains to the crowd that all bands have been asked not to swear on-stage between songs by the festival organisers. He adds: “I have a very limited English vocabulary… This will really F me up!” They perform one song in Swedish, after which Joakim realises he can swear as much as he likes in his native language.

On the Jägermeister stage, 5-piece melodic death metal band INCASSUM have drawn a big crowd with the impressive growls and stage presence of their female vocalist Sharleen Kennedy. This is one band that certainly would have been better featured on a larger stage.

The Saturday night headliners are the much anticipated LAMB OF GOD, and it’s clear that they have a huge metalcore following at the festival, who begin head-banging and moshing as soon as the opening song “Desolation” starts. Ironically, after the band play “Set to Fail”, and start into “Ruin”, the front barrier starts to collapse, and singer Randy Blythe stops the music, asking the crowd to take three steps back so that the railing can be repaired. 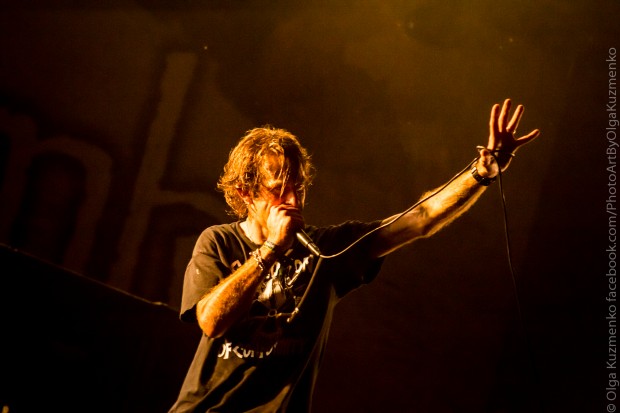 After what feels like a very long time, Lamb of God resume their set, but unfortunately the band seem to have lost momentum and before long the barriers fail again resulting in another prolonged silence. Randy tries to entertain the audience, but patience seems to turn to apathy, and while their overall performance was good, it could have been great. After witnessing similar barrier problems in front of a much larger Slipknot audience at Download this year, we wonder why festival organisers can’t provide an better solution. 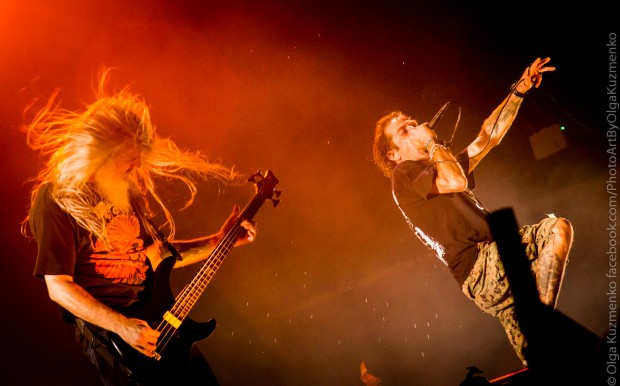 On the final day of the festival, Northern Irish thrash metal quintet GAMA BOMB open the main stage. Their songs are short and to the point with curious titles like “Smoke the Blow with Willem Dafoe” and “Mussolini Mosh”. Vocalist Philly Byrne, wearing psychedelic yellow and green trousers and a Michael Jackson T-shirt, instructs the considerable crowd to form a “Wall of Death” mosh pit. Despite the inevitable exhaustion of the previous 3 days, the fans seem to have abundant energy, and join in with the chorus of “We Respect You”, much to the appreciation of Philly and co.

WHITECHAPEL are up next. This deathcore group from Tennessee need no elaborate stage props or costumes. The veins on the face and neck of vocalist Phil Bozeman bulge and throb as he roars and growls through their 40 minute set. The crowd go wild, head-banging and forming large circle pits while thrashing to favourites like “Make it Bleed”. 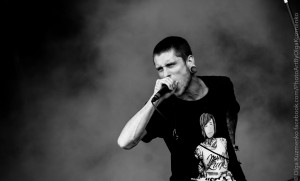 Californian melodic death metal band DEVILDRIVER have earned themselves a slot on the Dio main stage between veteran legends EXODUS and ANTHRAX. Vocalist Dez Fafara (also of Coal Chamber) addresses the crowd quite frequently. He spots an audience member in fancy dress on his buddy’s shoulders: “Look… It’s Batman… I was never a fan of Batman… Crush him!”. I hope the poor guy survived to see Slayer! As their set draws to a close, he announces “We don’t do encores… We have 3 minutes and 30 seconds left to kick your ass and we mean business… Open up that pit… Take your girlfriend out of the way and make some space!”. One of the biggest circle pits of the festival forms as they end with “Meet the Wretched”.

Main stage headliners of the festival are SLAYER, and the biggest crowd of the weekend have gathered to see these thrash metal legends. Their set list includes classic songs like “War Ensemble” and “Mandatory Suicide” that are recognised by fans young and old. 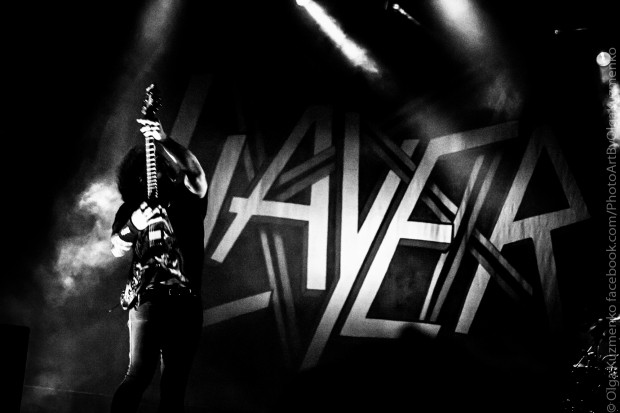 Before the finale of “Raining Blood”, “South of Heaven” and “Angel of Death”, a huge backdrop falls bearing a tribute to former guitarist Jeff Hanneman in the form of a parodied Heineken logo with the words “Angel of Death – Hanneman – 1964-2013 – Still Reigning”. The crowd cheers respectfully and chants “Jeff, Jeff, Jeff”. 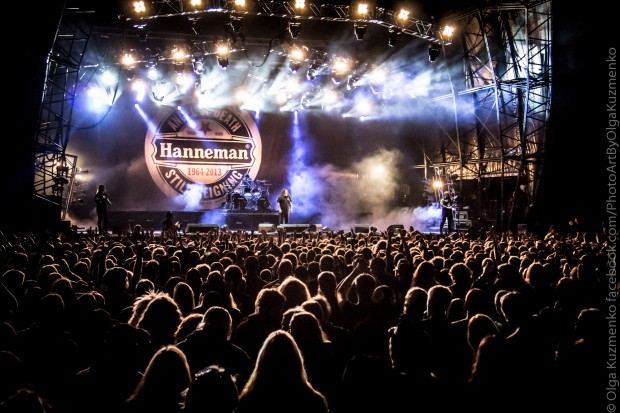 It might seem like a tough break to be billed opposite giants like Slayer, but DYING FETUS, a brutal death metal band from Maryland formed in 1991, have managed to draw a large crowd to the second stage while Slayer are mid-set. There is no doubt that those who are here, are here because they like their music heavy, and the moshing and crowd-surfing is relentless. They finish their set, disappointingly ahead of schedule, with “Kill your Mother, Rape your Dog” and “One Shot, One Kill”. 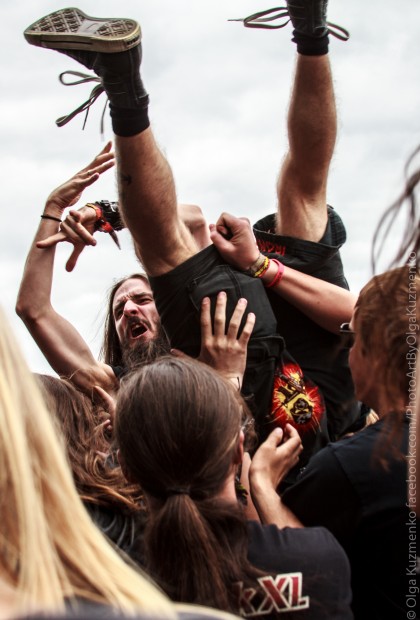 And so ends the live music at the Bloodstock Open Air festival for 2013. But some revellers are just not ready to call it quits. Back at the campsite, an impromptu flash mob forms, led by one rebellious activist waving an Irish flag, another sounding a Viking horn announcing their arrival and their growing disciples chanting “Join our Cult”. We leave the festival exhausted, but satisfied and looking forward to next year. Don’t miss it… 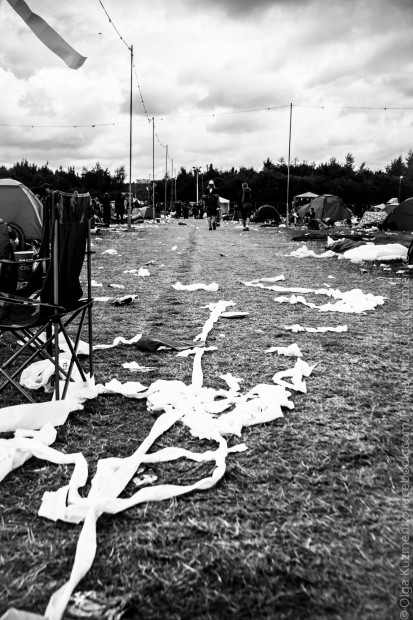