As the sun rises over the UK’ most Metal Kingdom, Bloodstock Open Air roars into action for its fourth [and final] day. 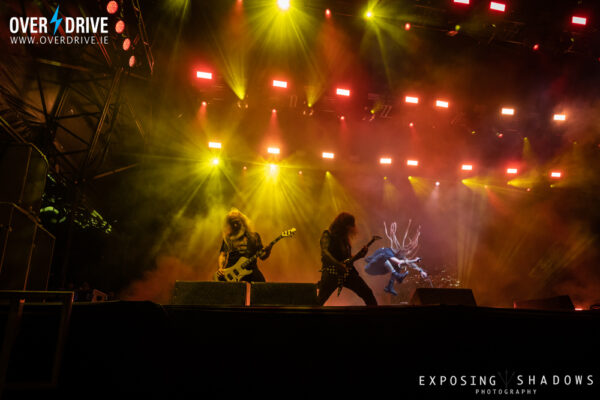 Punters lube up with suncream and venture into the wonderland of glorious noise to soak up the likes of Lamb of God, Dark Funeral, Killing Joke, Butcher Babies, Venom Inc and many, many more…

The day begins with the announcement that Life of Agony having to pull out due to drummer, Veronica Bellino becoming ill with heat exhaustion, and being, understandably, unable to travel, so some little adjustments have been made with boosting English hard rockers Scarlett Riot from the Sophie stage to opening the day on the main stage.

Vended take the stage afterwards and pull in the festivals largest crowd for this time of the day – many people being curious about watching Corey Taylor’s sons band and how they perform. The apple didn’t fall far from the tree, with Griffin Taylor displaying the same mannerisms and stage aggression as his father. Yet, let’s not make too many comparisons – as a band they do provide good entertainment and Taylor’s stage presence is impressive. 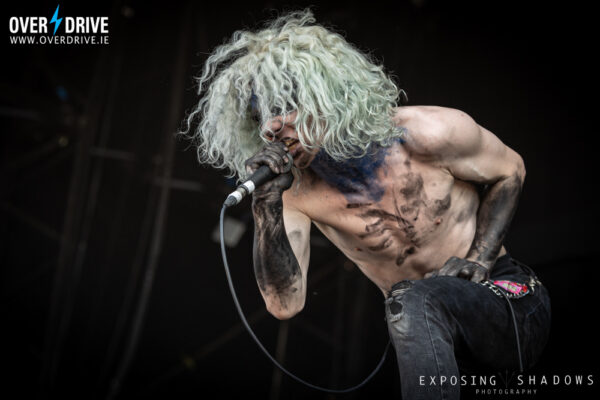 On the opposite side of the arena, Guilt Trip are pumping out a hardcore sound keeping the crowd who are seeking shade within the tent sweating. Also contributing to the biggest crowd seen at this time of day over on the New Blood stage, Devastater provide a phenomenal performance of old school thrash and speed metal while donned in fake blood and streaks of black paint.

Guitarist Christopher Whirehurst can’t contain his excitement, throwing fun animated gestures towards members of the audience. Between songs while bass player and frontman Thomas Collings is trying to talk to the crowd, the entire tent wont let him get a word in due to chanting the band name so loud and persistently. For fans of old school thrash – check them out.

After being announced to play the defunct Bloodstock 2020 line-up, Bay Area thrashers Vio-lence get their chance to take the stage. A stab at the recent Stranger Things series and the jump in popularity of the metal scene, “Metal is the new pop-rock, so I hear” vocalist Sean Killian jokes, to multitudes of answers like “Fuck off!” and “Bollocks!” yelled from different areas of the crowd. The band bestows a fast-paced and catchy set to the audience with songs majorly from 1988’s album, ‘Eternal Nightmare‘ – perhaps a godsend to one sole man in the crowd having a full-blown spiritual experience to the music.

Very nearby, Lore of the Woodman on the Jager stage deliver a refreshing set of feel-good, instrumental, prog rock reminiscent to that of, And So I Watch You From Afar. Demands of one more song ring through the tent and a silent dismissal comes from the stage manager – time is tight due to schedules, so the crowd instead yell words of praise and many people walk away singing praises and chatting among themselves of how nice is was to nice something different to what the rest of the weekends line-up is offering.

Just in luck, as the Jager stage is tuning down, Venom Inc blast their introductory music which pulls an immediate crowd. After many attempts to celebrate the ground-breaking LP,  Black Metal, [they missed out on the 25th and 30th anniversary], today is the day we get a full rendition of this classic album.

Guitarist Jeff ‘Mantas’ Dunn playfully directs the crowd into introductions to different intervals of the setlist. I spotted Machine Head drummer Chris Kontos and MH frontman, Rob Flynn punching the air at the side of the stage as the likes of ‘Buried Alive‘ and ‘Countess Bathory‘ are executed with snarling accuracy, much to the delight of the massive crowd that are battling the roasting heat to pledge their legence to the big man below.

Rising British rockers, Heriot pull in a crowd during their sound-check after a test of female shrieking vocals before opening their set with an interesting shift in genres; between death metal, to an abrupt mellow change, and back to hardcore. Apollyon are dishing out servings of their melodic thrash and death metal to crowds over at the New Blood tent. “Our next album will be about this thing, coming next year” vocalist Travis Ryan exclaims while pointing to the sun with a squint.

Cattle Decapitation deliver an insanely tight set of old and new material alike and surprisingly not as many crowd surfers as expected. Ryan intermittently blows his nose and spits on stage; one incident where he casually spits in their air, catches it, and proceeds to snort it – to mixed reactions of laughter and retching from the crowd.

Dark Funeral do their best to succumb the burning fire of the intense sun by launching ominous setlist of bangers that consisted of, ‘Unchain My Soul‘, ‘Open The Gates’, ‘The Secrets of the Black Arts‘, and ‘Nail Them To the Cross‘, to name but a few. Their set is outstanding to say the least. Carving a dark and foreboding presence into what can only be described as a glorious Summers day is a challenge that they most certainly conquered.

The security are quickly handing out cups of water to people up front of the Sophie tent while Ill Nino take stage who delivered reminiscence to many of the onlookers. Drummer Dave Chavarri delivers a drum solo with samba orchestrations thrown in for a touch of tradition.

For even more nostalgia, over on the main stage Killing Joke deliver their punch of new-wave industrial rock. For a split second it seems as if Jaz Coleman had succumbed to sunburn in an extreme way, but it turned out to just be a touch of red paint or fake blood for the performance. The crowd pump fists of excitement at recognition of the setlist as it goes on, including Eighties, The Death and Resurrection Show, and Euphoria. Guitarist Geordie Walker is feeling the vibe from the onlookers, as everyone is enjoying the feel-good vibe with plenty of people sitting back to relax to watch the show as the heat finally dropped to a slightly cooler temperature as evening sets in.

Special effects wardens arrive to the photo pit with multiple fire extinguishers for Belphegor who put on an intense pyrotechnic performance; terrifyingly inside a tent. Reminiscent to that of a ritual, the stage set-up included strong smelling incense and offering chalices, with monks arriving on stage to deliver more incense half way through the performance. In between the extreme Blackened Death metal approach, frontman Helmut Lehner beamed a smile of satisfaction during the bands most known song Conjuring The Dead. 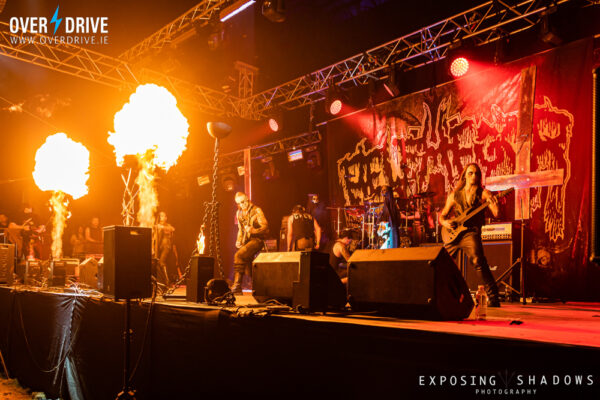 Perhaps a difficult choice for some people to make, a number of people could be seen sneaking out of the show to go to the main stage – presumably the Bloodstock Open Air app (which sends you a notifications 15 minutes prior to a bands scheduled slot time) had pinged for spectators who had highlighted headliners Lamb of God and they were running for a chance to get a space close to the stage.

Since the band hit the stage at approx 9.15pm, it had given an entire weekend and full day for crowds to hype themselves up – which included a guy shouting with glee being crowd surfed from the Jager tent towards the mosh pit on an inflatable mattress. Blythe and co decided to keep aloof and quiet between songs, opting to only address the crowd with a teasing “Hello! Are you having a good time?” towards the end of the show.

The thirteen-strong setlist hosted a variety of era’s of Lamb of God, reaching back to 2003’s, ‘As The Palace’s Burn song Ruin for old school fans and of course bringing fun to newer and up to date fans with songs Nevermore and Omens.

However, the insanity of the night has to go to the encore song – and everyone guessed it – the famous Redneck – which opened a gigantic circle pit and caused an even bigger plume of dust to rise up from the ground, which could be seen from all over the arena.

Wrapping up the festival as a whole, the last men and women standing head over to the Sophie tent for the last performance from The Night Flight Orchestra. Hard funk rock and synthy grooves evocative of cheesy 80’s singalong rock get the largely drunken crowd singing and dancing along to an overall brilliantly successful, optimistic and well looked after festival.

Massive kudos must go to the security at the stages and campsites, as well as the paramedics and carers in the welfare tent for their genuine respect and care for every person who went to this years festival; security were absolutely on the ball to help those in need of water, those who were ready to fall face-first over the barrier after surfing, those who had hurt themselves, and those who simply needed a place to rest (Note: despite staying very mindfully hydrated, at one point on Saturday afternoon I had to use the first aid facilities/welfare tent for nausea and dizziness caused from the heat and the carers were incredibly friendly, hospitable, and gave their full attention to every single person who came through the door).

Online, people had commended the security at the campsites on their mindfulness of the campers; one such security guard being recognised for bringing water to those who didn’t seem so well and offering entertainment and help to those who needed it.

It was difficult to be in the arena over the four days with the option of seeking shade, but it’s a completely different story for those who must keep a close eye on crazy crowd with pyrotechnics going on an uncomfortably close distance behind them, or sitting for hours on end in 35’C heat in the middle of a field.

Bloodstock Open Air 2022 will be one to remember for years to come – between the stellar line-up, excellent organisation, and the incredible weather – maybe that Baz Luhrmann about sunscreen was right after all! 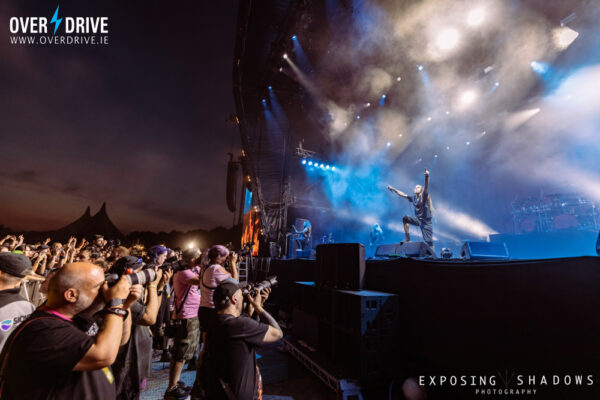