As the glowing orb of heat rises above the toasty scorched grounds of Catton Park, the anticipation of the days performances can be heard throughout the campsites and arena behind the backdrop of Mercyful Fate’s early morning sound check on the main stage. 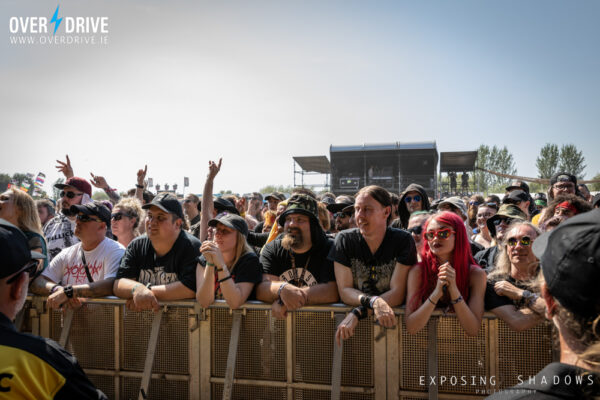 The glorious weather may be proving to be too much for some but the overall vibe is a mix of excitement and anticipation for tonights long-awaited performance from Mercyful Fate.

Braving the 28’C temperatures, a hungover albeit optimistic crowd welcome the Danish Baest on stage with their brutal death metal set.

Difficult to pin-point a precise description of what how classify their music, Pupil Slicer are blowing minds with a wide variety of styles, between death metal and psychedelic rock. “Go buy our merch – it’s the only t-shirt on the wall that isn’t black” frontwoman and guitarist Kate Davies exclaims.

Over on the main stage, dressed in fancy blazers and cowboy hats, southern-state themed Spiritworld play an interesting combination of hardcore, groove metal and straight forward-classic rock with crunching riffs.

Sound issues delayed Lorna Shore’s performance by some minutes and continued into the introduction with vocalist Will Ramos ad-libbing a mic check before the band broke into heavy-as-fuck Deathcore riffs. Ramo’s extremely low growls resulted in many of the audience dropping jaws and audible ‘oooh’s during the bands insanely heavy breakdowns.

Sound issues remained throughout the set with guitarist Adam De Micco whizzing through sweeping solos and licks but unfortunately with too low a volume for clarity. “This next song is called Karma. Do you know Karma, Alex (Landenberg, drums)? Not from your other band Kamelot.. this band” vocalist Joacim ‘Jake E’ Keelyn jokes. Supergroup Cyhra get hands clapping with their feel-good and pumped-up power metal and even a beer personally delivered to him from Cypher16’s Jack Doolan.

With crunchy riffs, angry vocals and sweeps, Sylosis groove the audience into the late afternoon. Fresh-faced New Blood stage players Steel Mage give a hell of an impression; not only is their fretless bass player Thomas O’Malley a complete monster with delivering sweeps and taps, but vocalist Joshua Watson is also playing with a broken ankle propped up on a stool. Fair play.

A single Ukrainian flag has been popping up in the crowd throughout the last two days, but today the support rallies to a whole new level with even more flags and t-shirts throughout Jinjers set. On approaching the stage there is a party of giant blue inflatable balls being thrown around in the crowd while the band smash their way through their progressive inspired metal. Vocalist Tatiana Smailyuk sails between calm clean singing, to brutal growls, and gives a touching political speak about the current events happening in Eastern Europe. 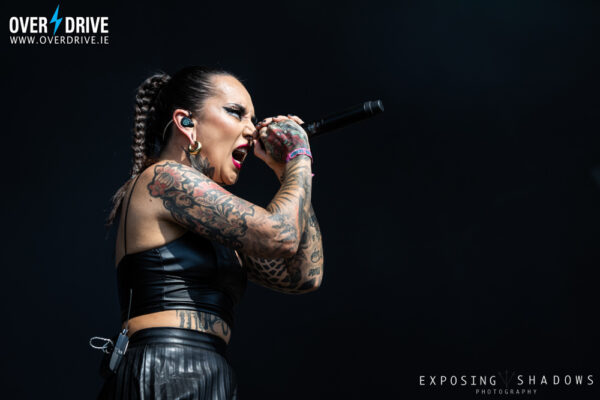 Hailing from Switzerland, Samael deliver a punch of catchy industrial/atmospheric black metal with Alexandre “Xytras” Locher jumping between keyboards and a drum machine.

Death metal and grind fellows Ingested have conjured up an impressive crowd from nothing when frontman Jason Evans displayed a combination of his guttural vocals during soundcheck. A few mentions of their name throughout the festival from passers-by, Solar Sons bring fun to the Jager tent with their crunchy straight-forward rock and roll.

Very close by, a crowd has gathered for Norwegian Black Metallers Dimmu Borgir over at the main stage. Perhaps there is something going on over at the sound desk if earlier technical problems is anything to refer to, as there was a fifteen minute delay before the band took to the stage after their scheduled time after a lot of impatient clapping from the audience.

While the sound seemed good, most of the band themselves didn’t seem to be into what they were doing, at times coming off a little bored. Perhaps Dimmu Borgir are not a band best suited to sunshine and daylight, but the gratitude shown to the crowd at the end left a good impression.

The long awaited headliner for Saturday, finally sees Mercyful Fate arrive on the main stage to a huge audience and an amazing stage show – a flurry of smoke, red, blue and purple lights highlight a giant inverted cross hung over a goats head symbol.

King Diamond himself casually hunts the stage with a dichotomy of clean vocals and his super iconic high pitched shrieks, with a nice inverted cross made of bones as his mic prop. The crowd are well behaved further towards the sound desk, with plenty of space between goers to navigate throughout the crowd or to simply respect each other – however maybe up the front could be a different story, as EMT’s bring a punter out on a gurney.

Fan favourites such as A Dangerous Meeting, Curse of the Pharaohs, Evil and Come to the Sabbath grace the crowd before the band wrap up briefly for a short intermission – being in your 60’s and still performing, especially with those vocal demands, can’t be a breeze.

A mildly confusing and abrupt end to the show, when the band exit stage left the crowd stands around not sure if there would be another surprise song, but after some shoulder shrugs people begin the wander to the other tents.

The Kuntz are hitting the stage in the Jager tent just as crowds are dispersing towards the Sophie tent – but due to how minuscule the Jager tent is, it was virtually impossible to get a close look at what their set is like.

Meanwhile, Malevolence are putting on an absolutely terrifying performance – not in the sense of scary music, as their breakdowns and riffs are actually extremely fun to be caught in the middle of a crowd of, but the fact that vocalist Alex Taylor taunts and encourages the crowd to set a new record of crowd surfers.

Taylor points out that yesterday Machine Head had set the record for the most amount of crowd surfers at Bloodstock, and that he wanted to top it. Even before the song starts, slews of bodies are sailed towards the barriers and throughout the song is a hilarious constant flow of people risking being thrown over the barriers if security can’t catch and drop people quick enough.

A gigantic and terrifying circle pit opens throughout the night, with more smaller ones taking part out of orbit. The Sheffield Metal crew band push the crowd into a feel-good mood for the rest of the night, before the stage is wrapped up for sleep until tomorrow.

The last three days have had the crowd in high spirits and good moods, with people being mindful of their water intake and protection from the giant sky orb. Secluded tents run by health services are set up to help those who simply need a lie-down or are seriously ill from heat stroke, and free water taps are dotted throughout the arena and campsites.

The most wholesome thing of the festivities so far are how many kids have attended this year and how genuinely into the experience they seem to be – and the feeling is shared as older charmed Metal Heads raise their horns to the kids, give pep-talks, and even buy them small gifts as memories for this year.

The last three days have absolutely flown and have blended into one giant haze, but tomorrow we hit the last day – with thankfully (slightly) cooler temperatures. 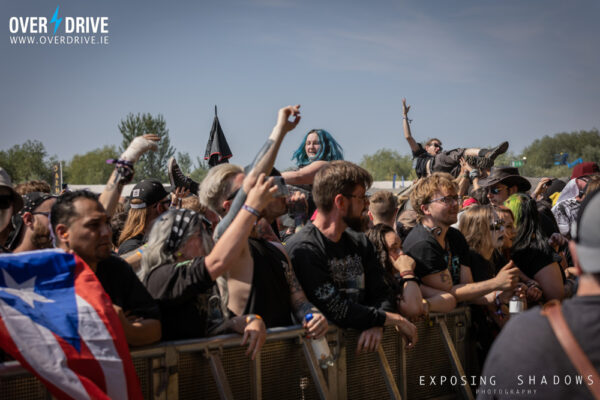