BODY ‘FUCKING’ COUNT, the metal band fronted by hip-hop legend, actor and director Ice-T, has set “Bloodlust” as the title of its next album, due in March via Century Media Records. 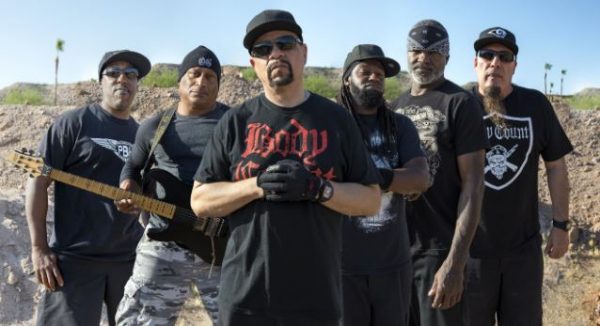 Working with producer Will Putney (MISS MAY I, UPON A BURNING BODY), who also helmed BODY COUNT’s last effort, “Manslaughter“, Body Count are gearing up for their 2017 return under a new deal with Century Media Records. Although the band have not set an official date for the release, they have specified that ‘Bloodlust’ will be released in March and have begun to release a series of short video trailers to hype campaign.

Ice-T said: “With our last album, ‘Manslaughter‘, we tested the waters and got a great response from the fans and critics. Now it’s time to go kill it and make a more aggressive album and keep the BODY COUNT style intact.

“Will Putney is like a member of the band and has an excellent ear. He’s a great producer because he captures the true essence of our band’s sound. Once we are done writing the song, it’s his job to step in and make it sound better. He helps move the record in the right direction. We’re anticipating working with him again. Once the record’s done, we’re going to shoot a lot of music videos and perform spot-dates on certain tests, etc.”

After teaming up with Sumerian Records to unleash the unrepentant Manslaughter in 2014, Body Count signed to Century Media earlier this year, inking a deal for Bloodlust. The band has already started shooting a music video for “No Lives Matter,” the album’s first single. The song starts out with a monologue by Ice-T, who takes on the people who say “All Lives Matter” in response to “Black Lives Matter” you can watch the video in full below.

BODY COUNT’s current lineup includes guitarist Juan Garcia (a.k.a. Juan Of The Dead; AGENT STEEL, EVILDEAD), who made his live debut with the group in November 2013 at the Fun Fun Fun Fest in Austin, Texas.

Get all the latest on Body Count by clicking this link.