BONAFIDE TURN UP THE HEAT AHEAD OF 10TH ANNIVERSARY


Super Swedes BONAFIDE gear up for plans to celebrate their 10th anniversary in style with new album ‘FLAMES’ and confirmed UK tour. Get all the details below. 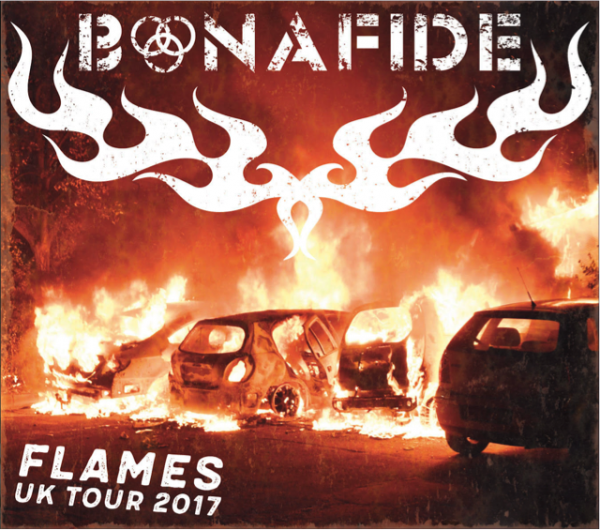 Explosive. Red hot. And with a burning ambition built to last: on new album FLAMES Bonafide are having a blast. Never before have the hard-gigging Swedes sounded so much like rock and roll’s real deal. It’s raw, it’s honest and it’s from the heart.

According to fiercely committed frontman Pontus Snibb, lead single SMOKE & FIRE says it all. “It’s a good song about bad practice,” said Bonafide’s main man. “Lyrically it’s giving our peers a kick up the arse. It’s about bands that like dressing up more than they like writing songs. It’s more about how these guys look and how they act on stage. We’re the complete opposite. I mean, we look ok! But for Bonafide it’s all about the music and it always has been. It’s about substance over style.”

And that’s been the Bonafide mantra for almost a decade. In 2017 the band celebrates its 10th anniversary and the party won’t stop: 14 gigs in 14 days across the UK will reinforce a reputation built on brilliant live shows and supreme songwriting.

“We’ve made a lot of friends in the UK and outside of Sweden it’s the place we love best and are loved best,” added Snibb. “But we’re likeable guys! We love beer, we love curry and we love rock. Maybe that’s why the UK is a home from home for us and always has been.”
Bonafide will be joined by Off Yer Rocka label mates Chase The Ace and fellow countrymen Killer Bee for what promises to be an adrenaline-fuelled spring break. And they’ll take the opportunity to fan the FLAMES by showcasing a slew of soul-tinged new tunes.

“The new album is a bit of a surprise where Bonafide is concerned,” added Snibb. “We actually have a gospel choir from southern Sweden singing on a few songs. There’s a classic Black Crowes kinda feel to some of the record. It’s rock and soul. And it’s something we’ve always wanted to do.”

Bonafide have always wanted to do it. And they’ve always done what they wanted. There’s no place for posturing. No semblance of selling out. No concessions and no corners cut. Just good, honest rock and roll.

“It doesn’t feel like this band has been going for a decade,” added Snibb. “On the first album I wrote and recorded everything myself and my only ambition was to get that record out. A lot of members have come and gone over the years and it’s been one hell of a ride. But I’m proud that Bonafide is still here. And still rocking.”

To See Bonafide Live Messin In Wales – Click Below!

Also Check Out Hell Yeah by Chase The Ace! – Click Below! 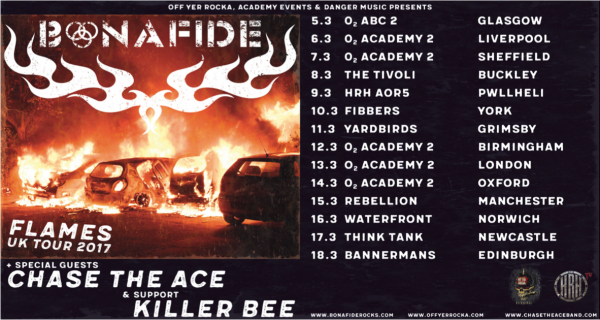