PANTERA will release a 20th-anniversary edition of their final album, “Reinventing The Steel”, on limited silver vinyl on January 8th. Get full details below: 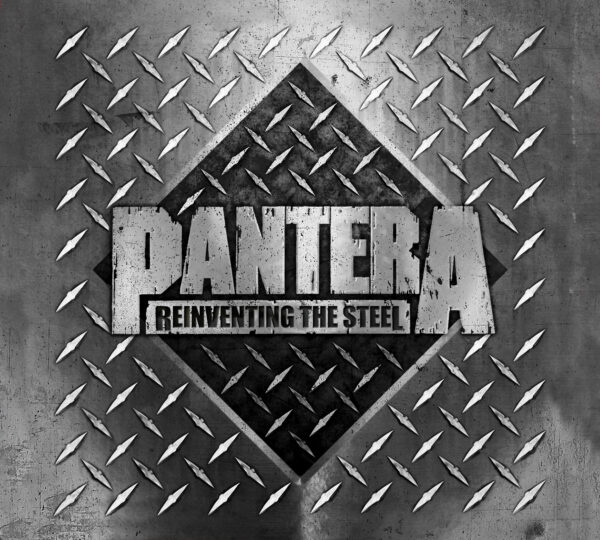 The legendary Texan’s 9th studio album ‘Reinventing the Steel’ gets a special reissue to mark the 20th anniversary. Find out more below;

Pantera’s final opus, Reinventing The Steel, represented a recommitment to everything the band loved about heavy metal. Released in 2000 at the peak of nu-metal’s popularity, the album’s back-to-basics approach flew in the face of the trend and served as a potent reminder of the enduring power of primal metal. Pantera’s swan song turns 20 this year and Rhino will celebrate with two new versions that feature an unreleased mix of the album by longtime producer Terry Date.

The first is REINVENTING THE STEEL: 20th ANNIVERSARY EDITION, a three-CD set that includes a newly remastered version of the original album and a selection of rarities. A major highlight is a new mix by Terry Date, the legendary producer who was behind the console for the band’s previous four landmark albums: Cowboys from Hell (1990), Vulgar Display of Power (1992), Far Beyond Driven (1994) and The Great Southern Trendkill (1996). The set will be released on October 30 and will also be available through digital and streaming services. 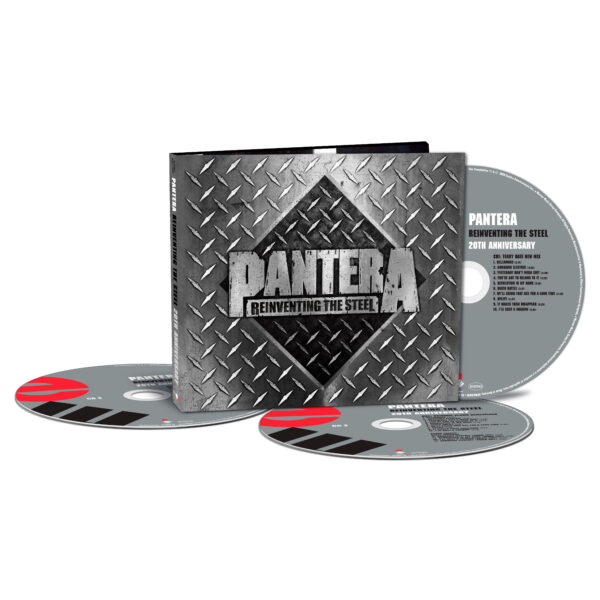 Three of Date’s new mixes (“Revolution Is My Name,” “Death Rattle,” and “We’ll Grind That Axe For A Long Time”) are available today digitally. Listen below;

REINVENTING THE STEEL: 20th ANNIVERSARY EDITION will also be released as a double-LP set on silver vinyl that features the new Terry Date mix on one album, plus eight rare bonus tracks making their vinyl debut on the other. Limited to 5,000 copies, the 180-gram audiophile vinyl collection comes in an embossed, foil jacket and will be available on January 8th.

Philip Anselmo, Dimebag Darrell, Rex Brown, and Vinnie Paul had already earned a #1 album and several Grammy® nominations by the time Pantera began recording Reinventing the Steel in 1999. The album would prove to be a celebration of the skull-rattling strain of metal the quartet had cultivated through the years with songs like, “We’ll Grind That Axe For A Long Time,” “Goddamn Electric,” and “I’ll Cast A Shadow.” Certified gold and embraced by fans and critics alike, the album would unexpectedly become the band’s last.

The three-CD and digital versions open with an unreleased mix of the album by Terry Date, who had been helping Pantera perfect its piledriving sound since 1990. Date – who likes Sterling Winfield’s original mix of the album – says he was initially apprehensive about remixing Reinventing The Steel for this reissue. 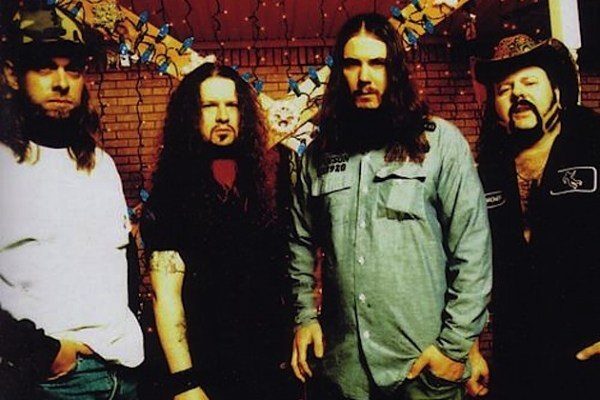 Eventually, he agreed knowing that diehard fans would be curious to hear his take on the album. He says, “…I’m just trying to remember what we used to do as I’m going through this stuff. But the riffs and performances are strong. It’s just classic Pantera.”

The CD and digital collections also include a newly remastered version of the original album, which was co-produced by Darrell, Vinnie, and Winfield. It’s joined by radio edits for singles (“Revolution Is My Name,” “Goddamn Electric”); covers (Black Sabbath’s “Electric Funeral” and “Hole In The Sky,” Ted Nugent’s “Cat Scratch Fever”); soundtrack contributions (“Avoid The Light,” “Immortally Insane”); and previously unreleased instrumental rough mixes for every album track.

Originally released on March 21, 2000, “Reinventing The Steel” was certified gold, peaking at No. 4 on the Billboard charts. Along with the singles “Revolution Is My Name” and “I’ll Cast A Shadow“, the album’s other standout tracks include “Death Rattle” and “Goddamn Electric“, which features a guest guitar solo by SLAYER’s Kerry King.

In a 2012 interview with Revolver magazine, PANTERA drummer Vinnie Paul Abbott stated about “Reinventing The Steel“: “I felt like things had turned a corner. I felt like Phil [Anselmo, vocals] had discovered some of these demons and maybe had some people around him that wanted to help instead of taking the other direction. We kind of wanted to go back and really grab some of the things that people liked the most about ‘Vulgar [‘Display Of Power]’ and ‘Cowboys [From Hell]’, and Phil’s exact words were that he wanted to make a record that was ‘more anthemic,’ lyrically. More stuff that people could sing along to. Dime [PANTERA guitarist ‘Dimebag’ Darrell Abbott] spent a lot of time in the studio with Phil working with him on his vocal arrangements and melodies.”

Anselmo concurred, telling the magazine: “I had kind of cleaned my act up. I had a new fire lit under my ass. Dimebag and I were very close on this one. I showed up for the jam sessions, and I think they were impressed with how I was. I wasn’t all fucked up constantly. It was a breath of fresh air. I guess I was dealing with the pain in a better way at the time, and if I was using, it was minimal and very spotty. But there was a renewed bit of brotherhood. 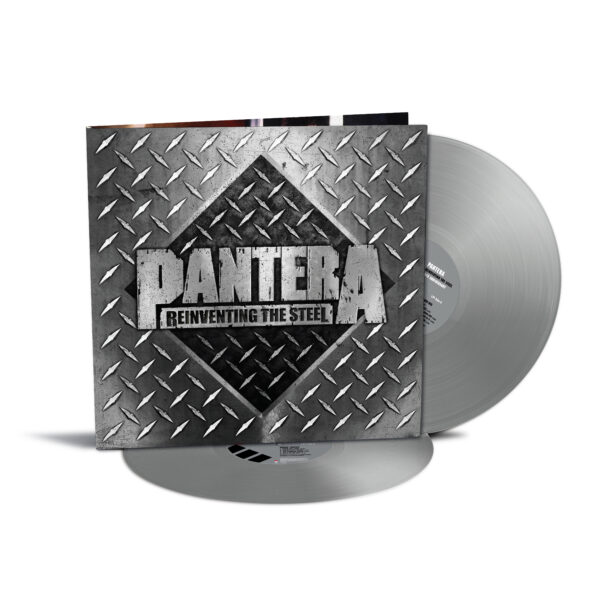 There was a renewed sense of enjoyment with the songwriting. I spent a lot of time at Dimebag’s house on the particular run. I remember his mother passed away when we were doing that record, from cancer. I was a pallbearer at the funeral. So it was a bonding thing as well. Somebody’s mother passes and it’s a big thing. Especially her. She was a big part of their lives, in my life, and in Rex’s life. It was a heavy deal. I was there for it. I love that record.”

Rex said that he found it difficult to look back on “Reinventing The Steel” knowing that it marked PANTERA’s final studio effort. “This record is the end, so it’s hard to talk about,” he said. “To me, it’s a great last performance. One thing we always said is, ‘You’re only as good as your last show.’ Or your last note, or the last thing you do. Because you don’t know what’s going to happen tomorrow. It could all end. And I’ll be goddamned if it didn’t.” 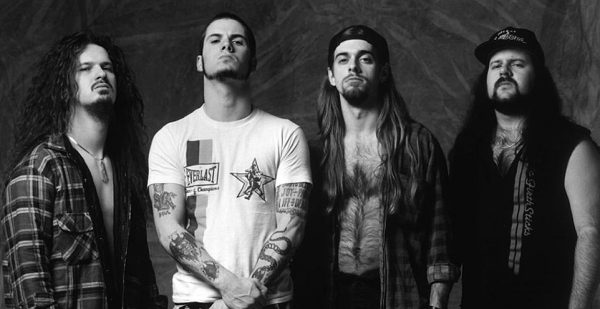