It’s only taken them 20 years to return to Ireland, but Carcass are worth waiting for no matter how long it takes, right? Well, we sent down our main man Shaun Martin to check out the most anticipated show on DME Promotions 2014 calender. 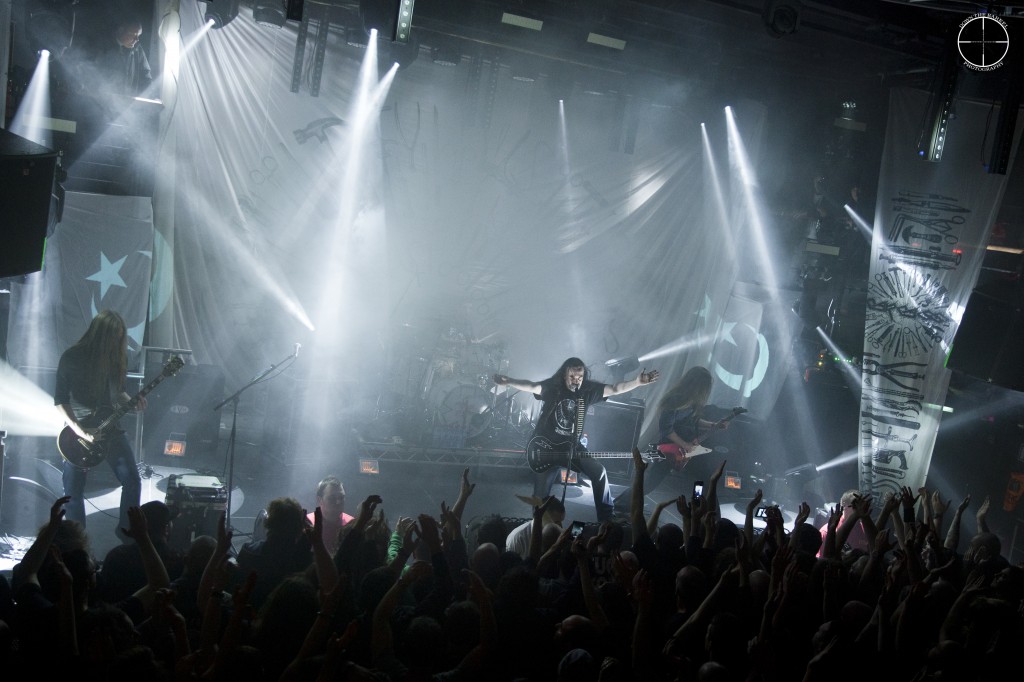 The last time I saw Carcass, I was in college and it was in a field in Germany. I was a little worse for wear and my memory of that particular festival (Wacken Open Air 2009) is a little bit blurry thanks to €8 litres of 6% German beer. But, not this time. This time the mark was made loud and clear. This time, there would be no forgetting. The first thing I see when I walk into the Academy in Dublin’s Abbey Street, is a gigantic white backdrop with the surgical tools from “Surgical Steel” hanging behind a covered drum kit. Either side of it were 2 more, thinner drops with the same images. From a band that spawned such a dark genre of metal, this seemed a little “odd”. I would later find out why the sheets were white.

The support act came from Dublin death metal/hardcore outfit ColdWar, who also supported Carcass the previous night in Belfast’s Limelight Club. The instrument players emerge first, and start their opening song, but their vocalist is nowhere in sight. The intro slows, signalling the start of the first verse, and lo and behold, front-man Trevor Mclave appears from behind a white Carcass backdrop and plunges the Academy into the depths of massive acoustic pressure with a voice so loud and powerful it makes the ground tremble. I’ve heard this man speak in person; soft-spoken, full of cheer, and a genuinely nice dude. If your eyes were closed, you wouldn’t tell it was the same man. No way in hell. His facial expressions communicate a certain waft of wanting to kill someone: eyes wide and vacant, with the face and mouth contorted into twisted fury, growling and snarling with a primal ferocity that makes you question the man’s sanity. It’s all part of the show.

Guitarists Paul Nash and Dave Greene drop the tuning into decibel-shattering riffage worthy of the band they are playing with, whilst bassist Andy Coade pitches in on growls and vocals. Drummer Marty McElhinney is double-bassing as if his life depending on it, never missing a beat and crashing through the tune changes every chance he gets. Masterful drumming if I do say so myself. Mclave, although not very animated in a frontman sense, makes up for it with his powerful (if somewhat homicidal), presence and awesome vocal ability. At the last song of a 30-minutes or so set, he departs as the vocal session ends, leaving his band mates on-stage to finish the set. Everyone looks around thinking “where’s he going”? But apparently this is the way ColdWar roll. They do their thing. If you don’t like it, tough! But we’re here to see something else……. 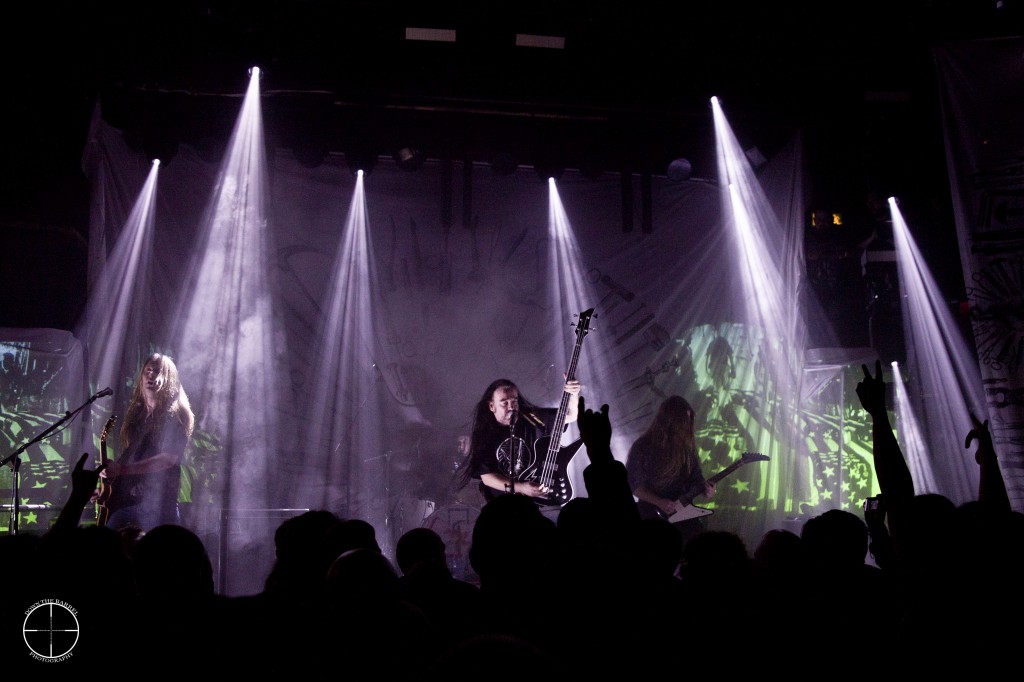 Welcome to the main event, ladies and gentlemen. Step right up! Take your seats for the night that took 20 years to happen. They’re here – Carcass are here! If you are a fan of heavy metal, meet one of the grand-daddies of goregrind, melodic black metal, and/or grindcore! They set the bar with trend-busting records “Reek of Putrefaction”, “Symphonies of Sickness”, and the immortal “Heartwork”. “1985”, the instrumental opening opus on “Surgical Steel” signal the return of the exiles. They burst onto the stage with “Buried Dreams” (Heartwork). Bassist and vocalist Jeff Walker and his grisly, gravel-filled singing voice echo throughout the venue, inciting a mass moshpit from one side of the floor to the next. That didn’t take very long! “Incarnated Solvent Abuse” (Necroticism) follows, much to the crowd’s delight. As Walker greets us with a hearty and mocking “Hello Blackpool! (“Booo!!” from the crowd) “Ha – see what I did there?!”, he informs us that it’s been 20 years since they last took to the stage in the Tivoli theatre in 1993. 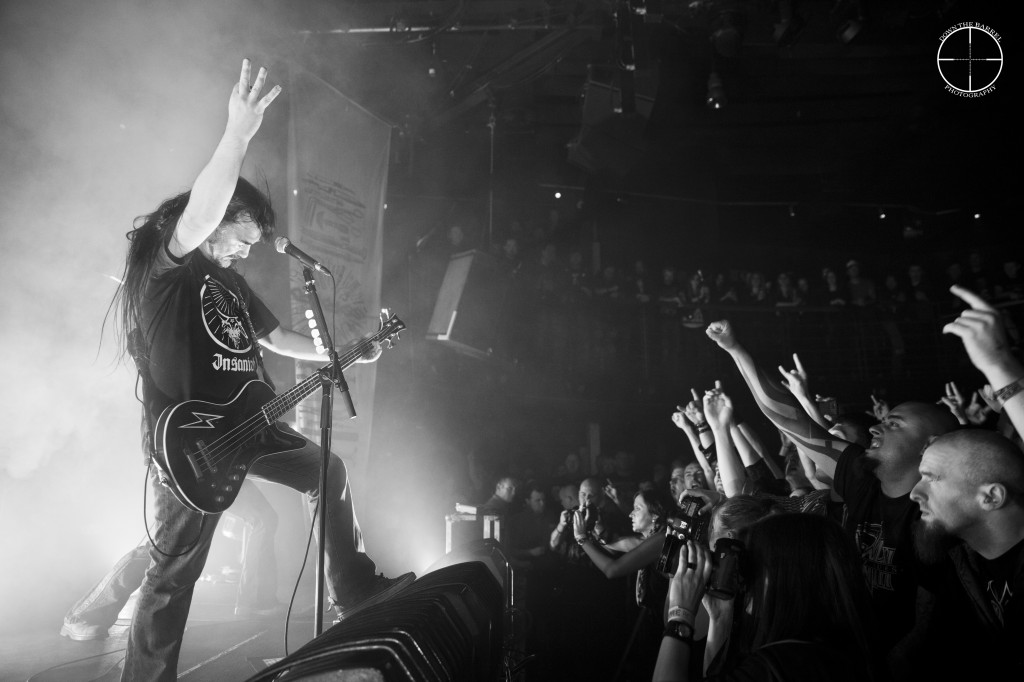 They only played 10 songs that night, and were going to treat us to a 2 hour-setlist. Cue rapturous applause and screams for random songs from their 25 year career. Jesus they’re shouting names for songs I don’t even recognise. “Cadaver Pouch Conveyor System” (Surgical Steel) and “Carnal Forge”, (Heartwork), heaps the masses into a swirling tornado of limbs. Despite guitarist Bill Steer (he and Walker are the only remaining founding members), melodic solos, it does nothing to cease to madness. At one point, Walker calls moshpits “a bit gay”. “Bang yer fuckin’ heads to this!” “No Love Lost” (Heartwork) reminds the fans that this is a reunion of sorts. Give the old-time classics a good “dust off and deliver”. Up next is a heavy barrage of classics: “No Love Lost” (Heartwork), “Noncompliance to ASTM F 899-12 Standard” (Surgical Steel), “This Mortal Coil” (Heartwork), and “Reek of Putrefaction” (Symphonies of Sickness). This is going down a treat: old and new songs (well new-ish, seeing as Surgical Steel came out this time last year), but all very definitely Carcass’ signature sound. Drumming maestro Daniel Wilding more than competently fills Ken Owens (the original drummer) shoes on the early songs, whilst guitarist Ben Ash is very quiet on Walker’s left hand side of the stage. Steer dazzles all night as the master axeman, but both he and Ash duel on harmonising shred solos. This is old school metal kids: pay attention! 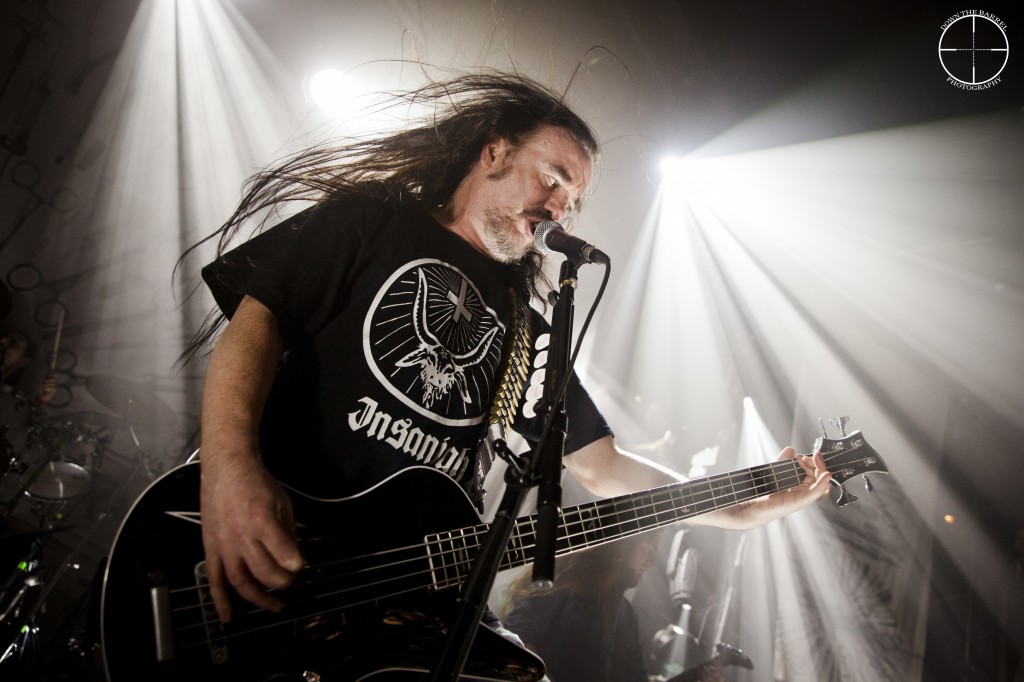 “Unfit for Human Consumption” (Surgical Steel) has a gritty, new, flashy sound to it, whilst still holding on to ye olde Carcass goregrind trademark, followed by another Surgical Steel number “The Granulating Dark Satanic Mills“. Walker remarks about how a lot of the fans who were at the Tivoli all those years ago seem to have gotten a little thin on top and a little wide around the middle – “20 years will do that!”, he yells. I’ll have to take his word for it because I was only 12 at that time. They drill another trio of gory numbers into us: “Genital Grinder” and “Pyosisified (Rotten to the Gore)” from the album ‘Reek of Putrefaction’, and “Exhume to Consume” (Symphonies of Sickness). 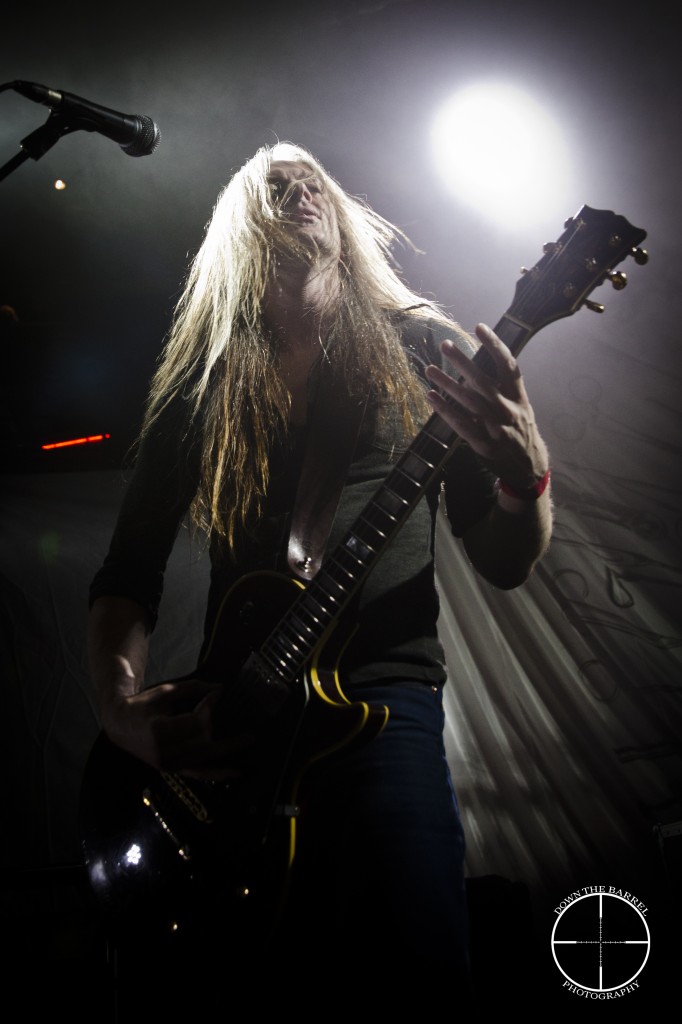 It has to be mentioned that the new lighting arrangement in the Academy is intense. The flashing and changing colours makes me thankful I don’t have colour blindness. Walker, Steer, and Ash are silhouetted against the white backdrops, whilst 2 projectors either side of the stage project looping images of grotesque procedures not out of place in Nazi medical training manual. It’s pretty intense. I think at one stage I saw a human heart being cut open like a steak (post-mortem I hope). This is why I mentioned earlier that I would find out why the backdrops were white. Point proven. “Black Star” (Swansong) has a more melodic sound to it. It’s one of the more chilled out songs of the night, and when I say chilled out, I mean not singing about rotting corpses and bowel movements. It’s very death metal oriented, but not in a gutfest way, with “Keep on Rotting in the Free World” (also from Swansong) keeping the pace a little more melodic and “headbangy”. I have to give props to Ash and Steer again. The harmonisation of both of their guitars is a lesson to be learned by all budding guitarists. You don’t need flashy effects pedals and 7-strings and fancy hair. You just need a good ear and practice, practice, practice. It might also be worth mentioning that I don’t think anyone changed their guitars once.

“Captive Bolt Pistol”, (Surgical Steel) picks the meat up where the pre “Swansong” duo left off. “Corporal Jigsore Quandary”, quickly followed by “The Sanguine Article” (both from Necroticism), pump up the blood before departing the stage. We know they haven’t played “Heartwork” yet, so we know there’s more coming (it’s like Metallica not playing “Enter Sandman”). Now this is the only black mark of the entire night: I’m amazed to hear that, despite the sell-out status of the gig, the fact that Carcass are back after 20 years, and the show they’ve just put on, there must be about only 40-50 people shouting for an encore. I’m confused here….seriously. People at the front are going nuts, as a few behind me are. 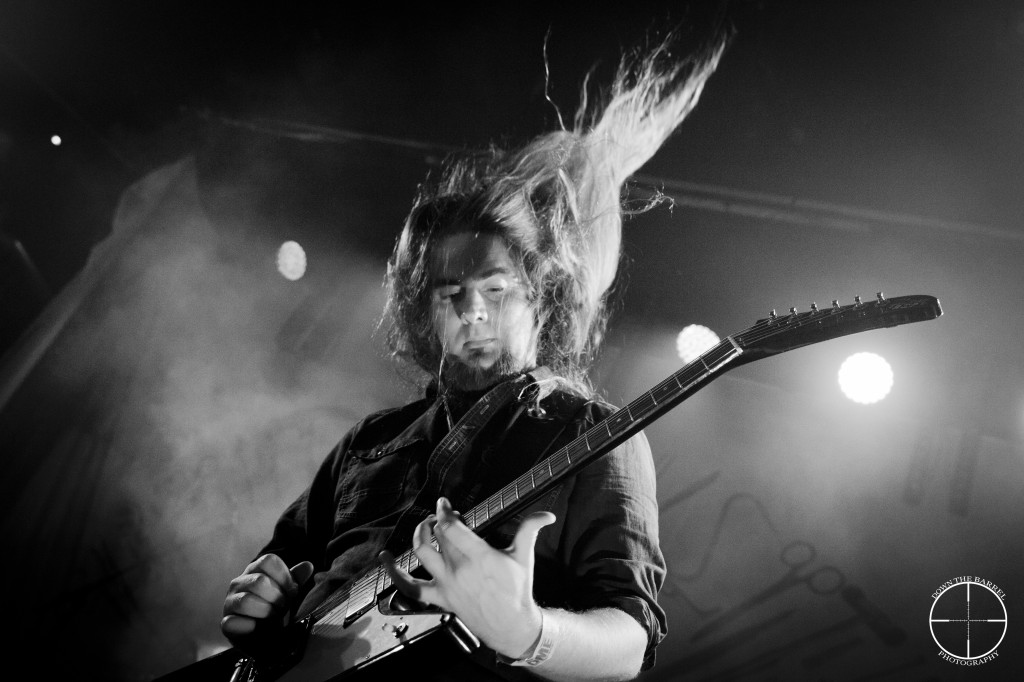 But that’s it! Its waaaay too quiet for a request for more songs. I’ve seen bands that frequent Ireland more often get full houses screaming for more. But I am genuinely shocked by the lack of enthusiasm. But Carcass have to come back again, because they know that nobody will be happy until they get what they came here for. And that is “Heartwork”. A little drum solo from Wilding starts a rhythmic clapping. Walker, Steer and Ash reappear, and fly into “Ruptured in Purulence” (Symphonies of Sickness), but in the middle of it, break into “Heartwork”. 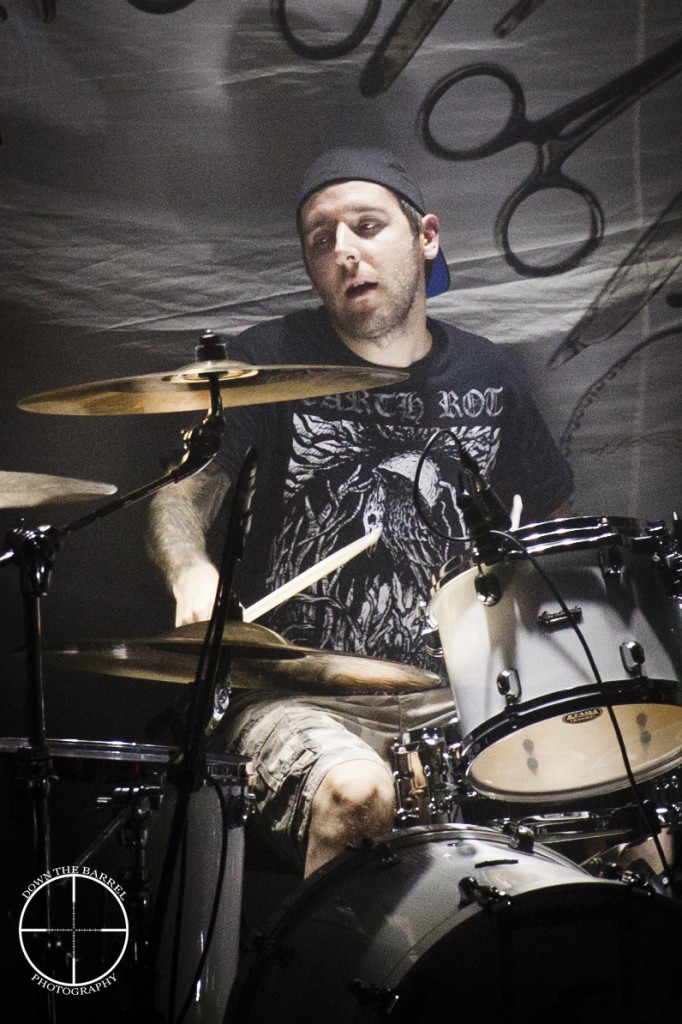 FINALLY!! Everyone stops for a millisecond and recognises what they’re listening to and explode into a chorus of gristle-infused sing-alongs. As the fans do their best to crush me and others against the barrier at the front, there’s enough crowdsurfing to start a world championship. Security finds they are very busy indeed. But that’s the game of working in a metal show. As it winds down to a final outro, Steer and Ash extend their guitar outro to an ecstatic and very loud audience (where the hell was this 10 minutes go!?). Many thanks from the band to those who came to see their landmark Irish gig. And so we find ourselves at the end of a legendary appearance. This was a hell of a lot more memorable than my 2009 experience. “1985” again echoes throughout the venue, and takes us out of the Academy to the street where everyone has gathered to discuss their favourite part of the night. I think it’ll be a discussion that might take some considerable amount of time. Class is ended boys and girls. You have your homework. Study hard, because this is how it’s done. 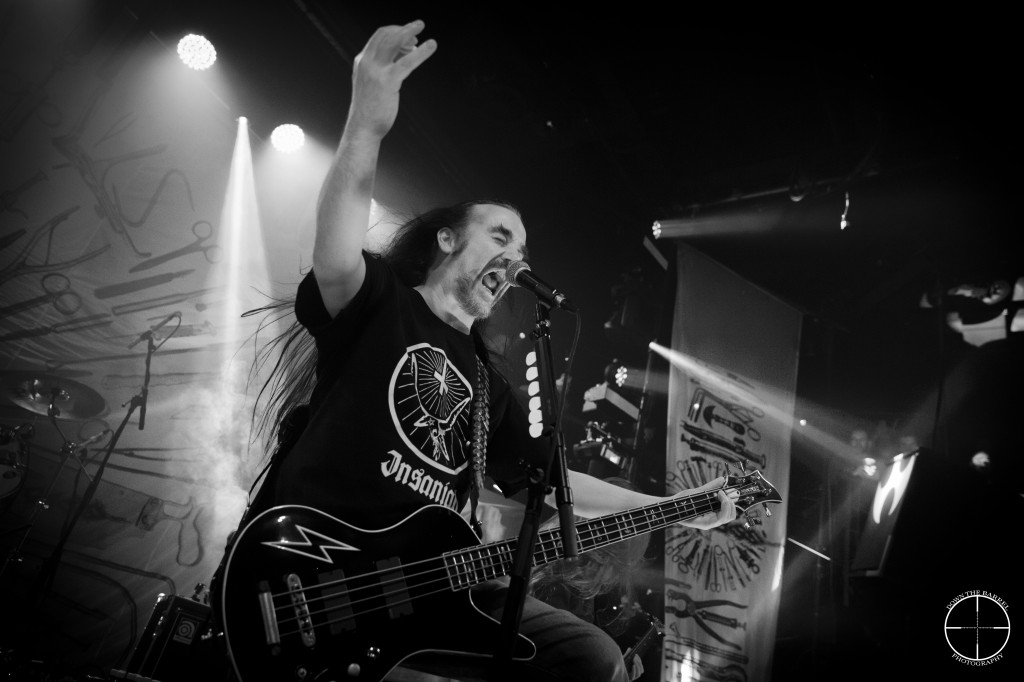 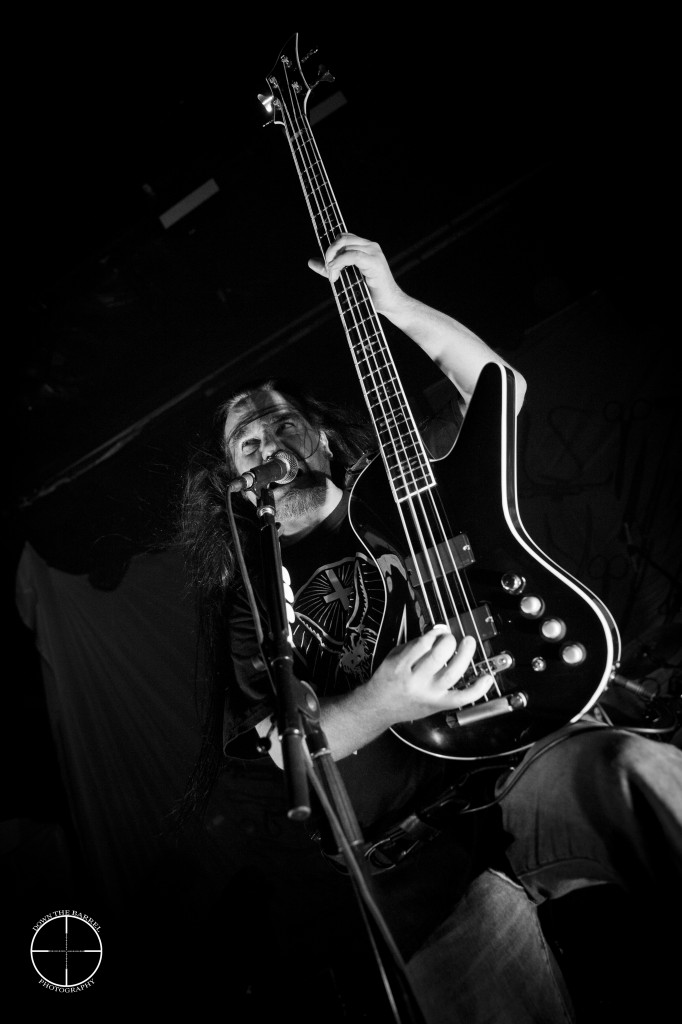 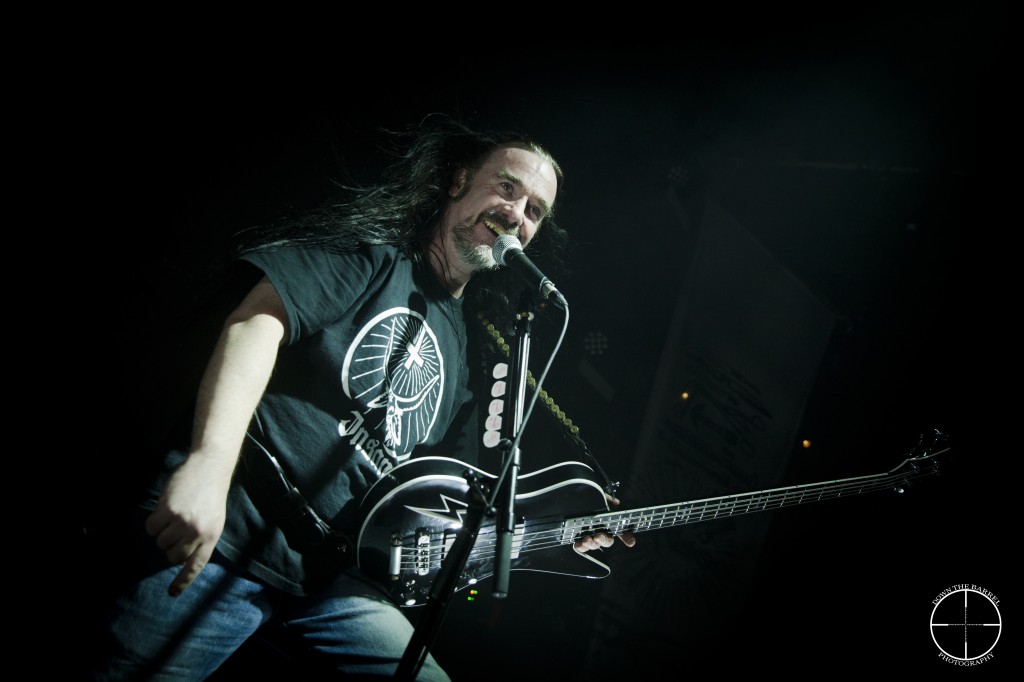 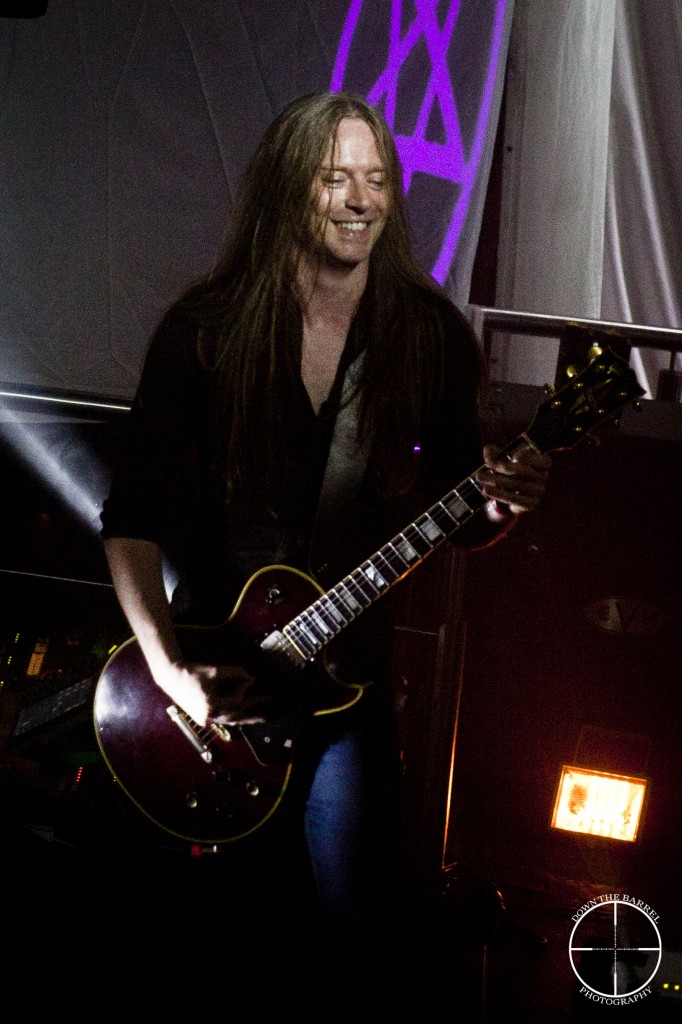