Overdrive caught up with former guitarist from the Wildhearts, CJ Wildheart and got the low down on his brand spanking new album “Mable” as well as his new life in the Yorkshire countryside and the launch of his rather tasty hot sauce, Devilspit!

CJ Wilheart is in fighting form as we talk to him about the release of his new album “Mable” as well as the launch of his very own “Devilspit” hot sauce. It is very apparent that CJ is in a very good place right now and is already planning his next album!

OD –  When you decided to let the music take a back seat and start your own business, didyou always feel that you might be drawn back to the stage somehow, and if so when did it become apparent that you wanted to get back into recording and touring etc?

CJ – There was a major change in my life when I hit forty, when the Wildheart just finished touring and we weren’t doing that well. Although we had put a lot into the album, it didn’t do well and I came to a major crossroads. I needed a break. If I had carried on playing, I think I would have left it for good. So having this break wasn’t me giving up on music it was me literally on holidays for a few years.

I wanted to do something I hadn’t done before and that was having a real job. Call it a mid-lifer. It was a massive crash back down to earth and it was the reason why I could go back to music with more passion and vigour. I had a lot more money and stability running my own business. The Wildhearts, who are massive, used to be a full time job but it is not now. To run my business was a stable income and I was quite successful at it.

With songwriters you need to feed the fire. Playing in bands can get stale because you go on tour, you record, you make videos, you do interviews. It’s the same process and having a day job, the stimulation was completely new and it pissed me off at times and was frustrating but it was new experiences that were welcomed with open arms. I wouldn’t have made Mable if I didn’t leave music for three years. They go hand in hand.

OD –  The new album is called “Mable”, can you talk a little about why you choose this name as I was told it was named after your favorite chicken?

CJ -Yeah, I have three chickens in my back garden, my favourite being Mable, and I am a massive Weezer fan. They are a very direct band and have an obvious sound. I thought that maybe Mable would be a title that they would use for their album. So it was a combination of the fact that I love Mable- she is a character who is always moaning – and it was a title that Weezer would have loved.

When I told people I was going to call the album after my chicken a lot of people thought I was crazy but they are all now going ‘that’s a really cool idea.’

OD –  You are reported to have recorded the majority of “Mable” in your house, did you find this a very different experience as opposed to the previous album? It seems to be more relaxed.

CJ – All of it was recorded in the spare room which I turned into a studio. There are a couple of reasons why: I wanted it to be a true solo album where I was working on my own. All bands bring drama and I wasn’t in the mind set to go into a studio, put a band together and its 2014, not the 70’s or 80’s. You can now record on your own with the technologies out there. A few people ‘diss’ me for using a drum machine but again punk rock finished and its 2014, not the 70’s; music has moved on. I like working on my own.

OD – The song “Vitriol” which is a song by Blue Juice, which I was surprised about, as no one really knows that band over here, how did you come across that song and had you been in contact with the band prior to recording it?

CJ -There is an Australian band called Regurgitator and I discovered “Vitriol” and Blue Juice through being a fan of them. I immediately connected with it. It was when I was running my cleaning company and I was leaving the house every day at 5.30am in a van. It is just a great song to put on going to London. It is such a get up, fuck you sort of song.

It was the first song I recorded on Mable and it sort of eased me into the whole process of recording again. I think one thing that the song always lacked was guitars and a sort of punk rock feel to it and I added it to my version. 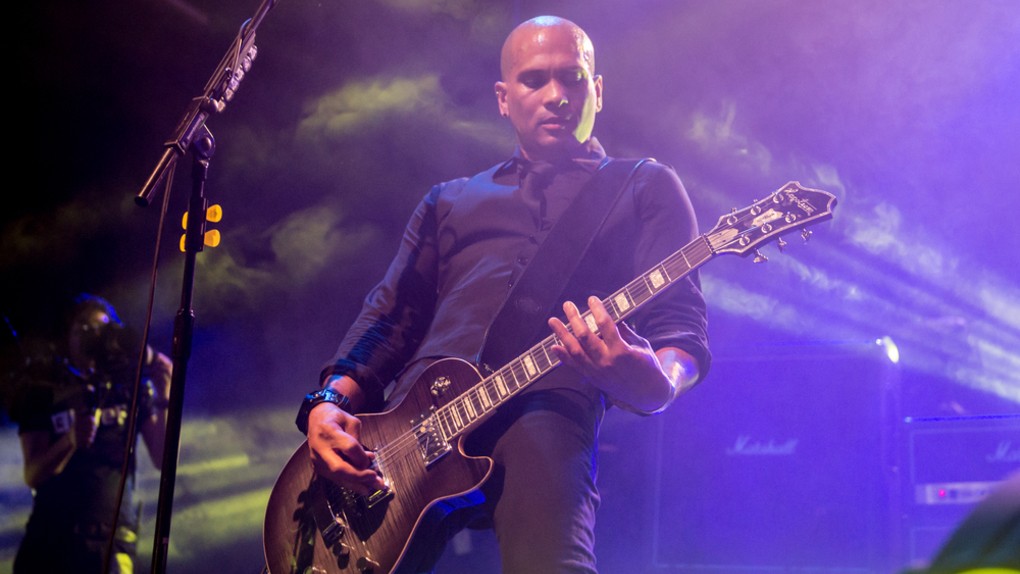 OD –  The Pledge Campaign that you undertook to put out “Mable” and re-release “Thirteen” is a very different approach to releasing music but seems much more beneficial to you the artist and the fans. Do you recommend taking this route for future releases and also what role do you think labels have these days specifically in Rock/Metal music?

CJ -The reason why Ginger and I could make music is because Warner Brothers invested millions in us when we were in The Wildhearts. If not we wouldn’t have been successful in the 90’s or do a Pledge album now. You need a fan base for it to work. It allows me to be a musician but make a living also. Pledge enables me to sell direct to the people who want my music and I can give value for money.

Saying that, there are musicians out there that use Pledge to rip off fans. You have to appreciate the position that you are in. You have a responsibility to your fans to give value for money.

If you look at massive bands, the amount of albums they are selling it is phenomenal and a huge operation. I sell Pledge albums, its thousands of albums, but its small scale. There are a lot of people helping me who don’t get mentioned. You realise how much a label does. They are not just sitting in an office counting money. If I was in a successful band I would have a record deal but I am not and that is why I use Pledge which is perfect.

OD –  The video for “Down The Drain” is very entertaining, can you talk about the idea for the concept and how it came about and who is the guy in the video?

CJ -Well, the song is my shout out to Mother Nature telling her to get up and start fighting against man. The girl who I tell to get up is Mother Nature and the video is to show how pathetic and weak men are but also funny and entertaining. I could have done a video of the world in turmoil but this is a subtle message.

It is a bunch of old dudes in a Working Man’s club in Yorkshire and it signals an end of an era – everything comes to an end. The video has a double message but the fundamental message is for Mother Nature to start fighting.

OD –  Have you ever considered putting Honeycrack or The Jellys back together for some live shows?

CJ – I did some acoustic shows with Willie to promote my album and I will be helping him with his album. That was last month and it was the first time that I played the songs live since about 1997 – it was a great experience and Willie is amazing. I learned more from him in the couple of years that I spent recording with him. If I hadn’t been in Honeycrack with him I would probably have to pay someone to produce every album but I was fortunate to learn the science of music and that was down to Willie Dowling. I would love to record with Willie, not necessarily Honeycrack, but The Jellys, I don’t think they will be doing anything again.

OD –  You now live in Yorkshire and I believe that is where you found refuge to write this album, some of the tracks such as “Next To You” and “Kentucky Fried” seem to reflect your thoughts about living in a city and the manic pace that it involves, could you ever see yourself living like you did in the past or have you found your haven now where you can create and live in peace?

CJ – I am a firm believer in moving forward and I have a problem with people who stayed the same for years – the same look and reading from the same script. It is important that you experience as much as you can. The person I was in the past is in the past and I am moving.

I love where I live and I adore the people here. Nothing would make me move back to London. I like London – loved it, but that was a long time ago and I don’t move back, I always move forward.

OD – Can you talk about the cover of the album and how the design came about? Do you give the artist full freedom to create or did you have some kind of concept from the start?

CJ -The artist is Michael Evanston and we worked together. I came across him as he sells custom parts for guitars over eBay and I seen his art work that was very creepy, carnival like and amazing but also disheveled and distressed. I asked him if he would work on the album cover and that I wanted a chicken on the cover. I sent him a picture of a chicken’s skeleton and he took it from there so the artwork is his style.

I brought out a range of Hot Sauces and Michael did all the artwork of that also.

OD –  How did the hot sauce come about and how much were you involved with the actual making of it? 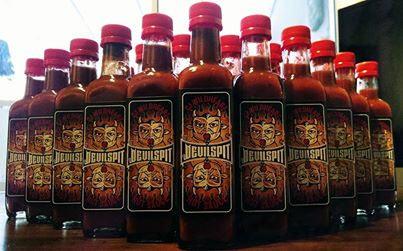 CJ -My father is Indian and my mum is from Seychelles and she always made her own hot sauce. It is something that I grew up and I love cooking, it is my number one passion, I use hot sauce on all my food. I have cooked for all the bands I have been in, most people know that I cook.

I had a chance to do something different because I have an album on Pledge and I wanted the album to come with something different. A local company called ‘Chilli Devil’ approached me and we came up with this recipe called ‘Devilspit’ which was a combination of beer, barbecue and chilli all in one bottle. I have another few sauces coming out this year. I never thought I would be in the position to make chilli sauce.

OD –  Finally, what is your favorite album cover of all time?

CJ – – Fishbone ‘Truth and Soul’, the one with the fish on it, it’s is amazing

Mable is out now. Get your copy here.

To buy some of CJ’s tasty Devilspit hot sauce, just hit this link and place your order.