CLUTCH – “Ever since the term “stoner rock’ was invented, it kind of ruined stoner rock” – Tim Sult


Without a doubt, CLUTCH are experiencing the most success they have ever received, since the bands formation nearly 25 years ago. Their new album “Psychic Warfare”, which was released in October of this year, has been flagged as one of the most acclaimed albums of the year from many credible media sources and we certainty don’t disagree! On the day of the bands biggest headlining show on Irish soil, Overdrive sat down with guitarist and all-round nice guy, Tim Sult, to discuss the creating of the album and his thoughts on the current state of the popular rise of ‘stoner rock’, amongst other things. 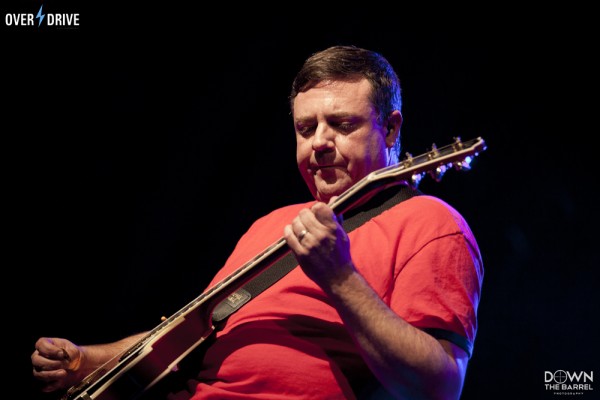 There is something very magical about the backstage corridors of Dublin’s Olympia Theater. As we are led to the dressing rooms of Baltimore’s finest groove merchants, the walls tell a story of rock n’ roll history and debauchery with images of iconic rock stars occupying every turn.

Speaking of rock stars, CLUTCH are one of those bands that never claim to be any specific type of musical royalty and instead, prefer to get down to business, by hammering out their instantly classic slabs of white-hot ear candy. 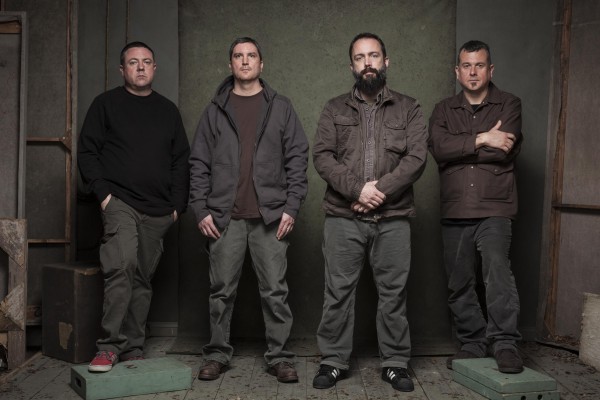 We find a very relaxed, easy-going and polite Tim Sult, lounging in a creaky leather chair, among a room laden with bags, laptops and guitar bags, to talk about all things CLUTCH!

OD –  I wanted to ask about your approach to the music on ‘Psychic Warfare’. I had read that Neil (Fallon, vocals) based the some of the album’s concept on the idea of wrestling between reality and unreality / fiction and the ‘fuzzy’ borders between the two. With this approach in mind, was this any part influential to the construction of the compositions?

TIM – No, we usually write all the music before Neil gets going on the lyrics. I would actually say about 99% of all Clutch music that has been written, it’s the music first before the lyrics and then after that, once there is a good solid vocal idea, we kind of work around that if we have to.

OD – Was there any particular approach to the writing of this album in terms of influences or was it just a very natural, organic process?

TIM – Well, I would say we probably spent more time writing the songs on this album maybe than we had with our albums in the past. We wrote it over such a long period, from when ‘Earth Rocker’ came out, to the time that we started recording “Psychic Warfare”. I guess it wasn’t really that long, possibly a couple of years at best. As far as musical influences go, I would say that there is a little more ZZ Top groove, that ended up coming out on this record a bit more than the past few albums. As far as my influence on this album, it was basically Motörhead and Thin Lizzy on “Earth Rocker’ and kind of the same cocktail for “Physic Warfare”, was again Thin Lizzy, Motörhead, with the ZZ Top ingredient, for good measure (laughs)!

OD – Are you constantly writing and logging ideas, riffs, melodies etc? Do you ever have a break from the creation side of music?

TIM – Yea, I’m always writing and that goes for all of us really. I try to lay down as many riffs as humanly possible. I’ve probably only presented about .0000000.1% of my musical ideas to the rest of the band (laughs), so yea, I mean we are always trying to move forward as a band and try not to be too stagnant with what we do. 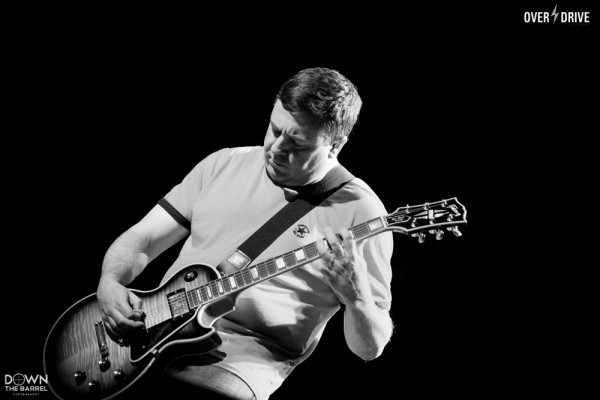 OD – Can you give a little insight into the background of the album design and why you choose the image that graces the cover?

TIM – The photographer and art director for this album was Dan Winters and he came up with the album cover and basically we loved it, because you can see it from a mile away. It really stands out, as does most of Dan’s work in general. If you see a bunch of records together for some reason, Dan Winters work just stands out more than the average, so we decided to go with him for ‘”Psychic Warfare”.

OD – Did you give Dan some of the music beforehand to get a sense of the album?

TIM – Absolutely, he had heard all the music before hand. I think a lot of the reasons that we like to use Dan so much, is that most artists associate Clutch with fast cars (laughs)! For some reason they just put a muscle car on the cover, but Dan takes it into different realms and that really works well with us. I guess to us, it kind of retroactively is almost, “Our Lady of Electric Light”, you know that song from the album? The image on the cover has that vibe from it and seem to just fit for what we were looking for. We ended up putting the lyrics from “Our Lady of Electric Light” on the sword that is on the photo. That’s not actually in the original photo, so we had to Photoshop that in, so maybe that’s where he got the idea for the cover.

OD – While we are talking about the album, we have had some difficulty trying to get our hands on a vinyl copy, is there any reason behind this that you can shed some light on? 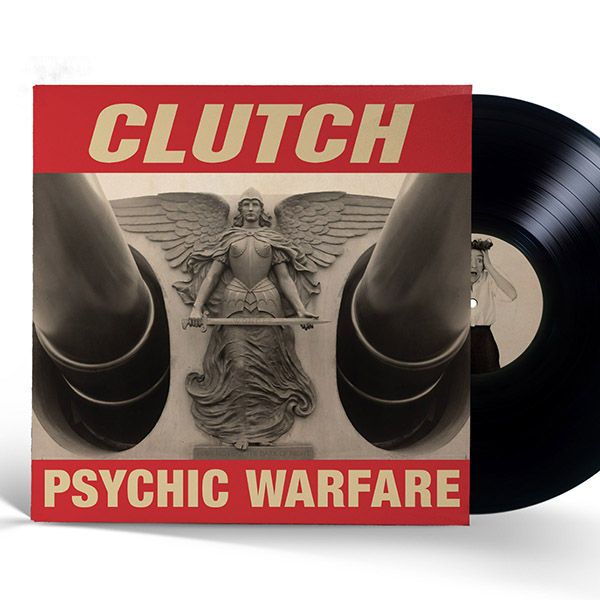 TIM – Well, not only can you not get a vinyl copy in Ireland, but you can’t get a vinyl copy in America either! The reason for this is basically the original test pressing was not approved. So we we went through that process twice and it was still not approved by the mastering guy, so we just had to wait. It was actually just approved last week (November 9th-13th) and will be out soon. (* A release date has since been set for December 18th)

OD – I had spoken with Jean Paul earlier this year (see interview here) about he recording process for this album and particularly the dynamic between himself and Neil. Was there a great deal of changes that took place from the original ideas, to what we can hear on the finished album?

TIM – Not a huge amount, however drum wise it’s probably a different story. JP’s whole approach to recording and tracking is totally and completely different from what my approach would be, but I think the stuff that you’re talking about is very much a kind of energy that happens between JP and Neil and their process of working things around what we have already recorded. As far as my contribution to the recordings, the there was little to no change with the guitar tracks on this album. 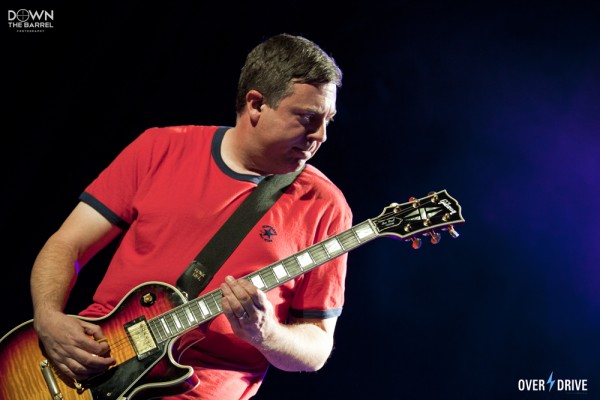 OD – Clutch have been on a high in recent years, with wide-spread appreciation for the band that has seen you performing in bigger venues and reaching higher positions on the albums sales charts etc. Considering that you have been in this band for nearly 25 years and now you are finally getting to see the fruits of your labor paying off must feel a little strange at times. Were there any moments in your past where you felt like just giving it all up and doing something else?

TIM – Yea, a few times like anyone would be about any job, but right now everything feels great! Especially to know that we have done it all on our own terms. On ‘Earth Rocker’ and now “Psychic Warfare”, we were able to take it to the next level somehow. I think we are maybe doing a better job in getting the news out to our fans, that we are working on a new album and we are in the studio or just about to head out on tour, or whatever it may be. That was something that we were never very good at in the past, or we just left it to somebody else, who did nothing about it and totally dropped the ball for our fist eight or nine albums. Even though the ball was dropped, for the first nine albums (laughs), on the tenth and eleventh, we managed to pull is back and turn things around.

OD – Being in control of everything via Weathermaker Music, is a very fortunate position for Clutch, considering how many bands are getting screwed by their labels. Would you agree?

TIM – Yes totally! When I really think about it, the amount of money that we are going to make selling our recorded music, it’s not really much more than we get from playing a couple of shows. I can’t really see why anyone would start a record label these days for profit reasons! I can understand if it was for an artistic purposes and you get some type of fulfillment from seeing the music released independently etc like we do, but I really don’t see any profit in the music industry these days.

OD – I would like to ask your thoughts on what happened in Paris recently and if you think that horrific incident will affect the way we can enjoy live music from now on, almost like the way air travel has dramatically changed, with over the top security measures?

TIM – Wow, I haven’t really thought about it to be honest. We are going to France on Thursday (Nov 26th) and are playing a TV show and then on Friday we will be playing our own headline show. I know a lot of bands that have played there since the attack and it’s been totally fine. The only thing that will keep us away from playing there, is if they close the borders and don’t let anyone come in there and play. I can only hope that no one get’s killed at anymore shows.

Regarding the security at shows, I can definitely see things becoming more draconian in some places. It’s a shame but this is the world that we are living in now.

OD – You have had the pleasure of touring with some truly fantastic bands over your career, however, if you could assemble a line up that you would like to play with be it dead or alive, who would it be? 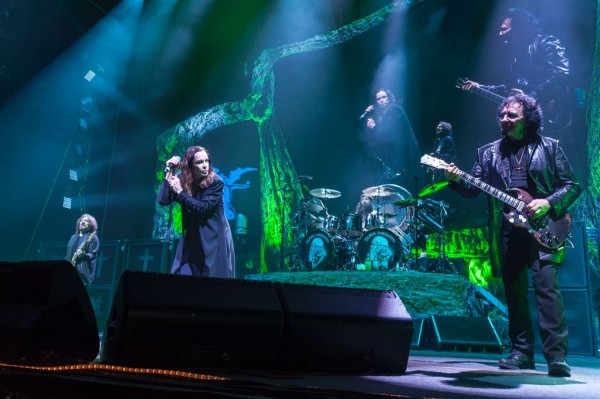 TIM – Well, we still really want to tour with Black Sabbath. I don’t think that is going to happen but if it did, that would be very cool.

OD – Do you think that music takes itself to seriously these days?

TIM – Well, maybe on stage at gigs I don’t really see that as far as personalities go. A lot of bands present their live shows as something really serious and in your face. I think people try to present their bands way more serious than we do. Obviously when we are on stage we don’t try to terrify you, or be harder or more bad-ass than you, or what ever they like to do. I think there needs to be more rock / stoner rock bands out there. I actually find the ‘stoner rock’ genre really disappointing these days. Those bands should concentrate on writing better songs.

Ever since the term “stoner rock’ was invented, it kind of ruined stoner rock (laughs), because people had too much of a direction to focus on and as a result, they just stayed in that very direction, instead of veering off and creating something in a different realm.

OD – If you could meet the 18 year Tim Sult and could offer one piece of advice, what would it be?

TIM – If I had the chance to do that, my advice would be quit your job right now! (laughs) 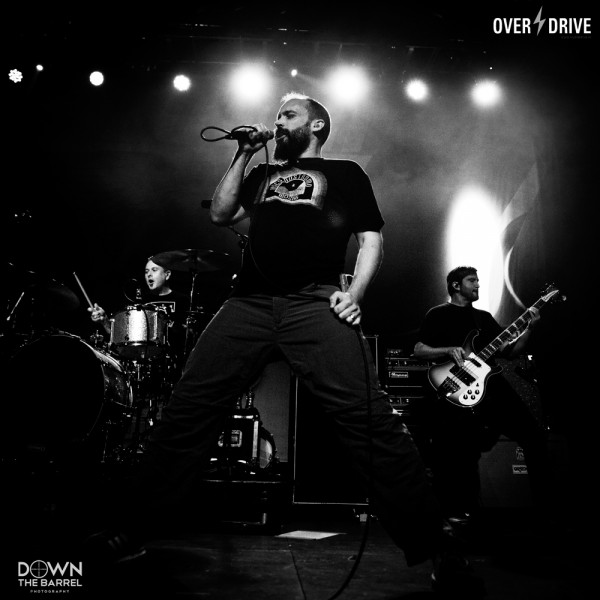 PSYCHIC WARFARE is out now via Weathermaker Music. Get your copy here.