Over the past 10 years, Claudio Sanchez and his group, Coheed and Cambria have distinguished themselves as among the most gifted storytellers in rock and they will be gracing the stage of Dublin’s Academy on November 19th. 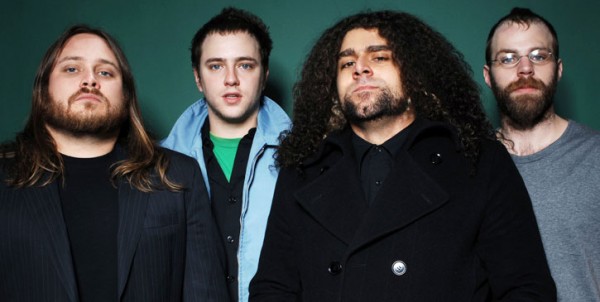 Now, after nine months in the studio, Coheed and Cambria seize on the momentum this October with their release, ‘The Afterman: Ascension,’ the first volume of a remarkable new double album collectively called ‘The Afterman.’ Volume two, titled ‘The Afterman: Descension’ will follow in February 2013.

True to Coheed’ s restlessly exploratory nature, the nine-track Ascension finds the New York-based band—singer-guitarist Claudio Sanchez, founding guitarist Travis Stever, bassist Zach Cooper and drummer Josh Eppard—staking out exciting new ground. “With all of our older albums, my thing was always figuring out how to fit my life into the Amory Wars concept,” Sanchez says. “I knew where each one sat in terms of the story. Whereas with this one, I allowed my life—my experiences and what I was going through—to frame the concept.”

In ‘The Afterman,’ celebrated cosmonaut/astronomer Sirius Amory embarks on a journey in which he makes arguably the greatest scientific discovery ever known to mankind. However, the death of his wife upon his return causes him to realize what was truly important to him just slipped right through his hands, and his only mission now is to make amends.

The first volume, Ascension charts Sirius’ sci-fi journey into the stars of the alternate universe known well by Coheed fans as “Heaven’s Fence.” Upon entering “the Keywork,” the blue gaseous energy force that powers these worlds, Amory stumbles upon the Afterlife. In his first confrontation with a soul, “Domino the Destitute” possesses Sirius, who is forced to relive the frenetic events that had occurred in Domino’s waking life. The second volume, ‘Descension’ follows Sirius’ return to his home planet after a long absence and the negative effects that follow.

Sanchez points to a specific catalyst for the two discs: the death of a close friend of his wife’s. “She found out about it through Facebook, which is the most impersonal way to receive this intensely personal news,” he remembers. “Later that night, I sat down and just started writing a song”—it became the album’s title track—“from the point of view of her experience. Everything else followed from there.”

Though shrouded in this epic tale, ’Ascension’ is really about Sanchez’s personal life outside the concept. As in “Subtraction” he describes the challenges posed by a touring life in which “I’m always going away for long stretches and coming back home,” and Sanchez even admits “Domino the Destitute” was subconsciously written about the recent departure from Coheed of former bassist Michael Todd.

Self-produced by the band with Michael Birnbaum and Chris Bittner (who both helmed the band’s first three albums), Sanchez credits the expansive musical vibe of the album—which moves from the lullaby-like strains of “The Hollow” to the driving, riff-heavy “Mothers of Men” to the deeply funky “Evagria the Faithful”—to the freedom he had while writing over the course of the last two years. It’s a freedom, he points out, that came as a result of the band’s working independently for the first time in many years. “When you write a record in a month and a half, you have the same mentality throughout the entire process,” he says. “But when you allow yourself time, your mindset changes and that influences your creativity. It gives you dramatic ups and downs, and I think that’s invaluable.”

Coheed’ s line-up transforms, as well, on’ Ascension,’ with the addition of Cooper and the return of the band’s original drummer, Josh Eppard. “When I sit down at the drum set to demo a song, Josh is who I emulate,” says Sanchez. “There’s a symbiotic understanding between the two of us: I play guitar with a lot of percussion, and he’s a very melodic drummer. I can’t even describe what a pleasure it was to see him walking down the driveway toward my house again.” Says Eppard of his reunion with the band: “The way Claudio writes has always felt like home base to me. I knew we could do something special from the first time we played together.”