One of the surprise hits during the 90’s post nu-metal craze is undoubtedly the reworking of Red Hot Chili Peppers sample of ‘Pretty Little Ditty’ otherwise known as ‘Butterfly’ to most, thanks to LA’s rock crossover upstarts, CRAZY TOWN. With new album ‘The Brimstone Sluggers’ having been released back in 2015, the European leg of their world tour pulls into Ireland and the UK later this month.

Venture Presents have confirmed that the LA five-piece will be taking to the stage in Dublin’s Opium Rooms on Saturday, January 28th for one night only. Tickets are on sale now via Tickets.ie, priced at €17.50 (inc booking fee).

CRAZY TOWN will be joined by special guests ILL DOSE who also hail from Los Angles. For your chance to win a pair of tickets to CRAZY TOWN in Dublin’s Opium Rooms, simply follow the instructions below: 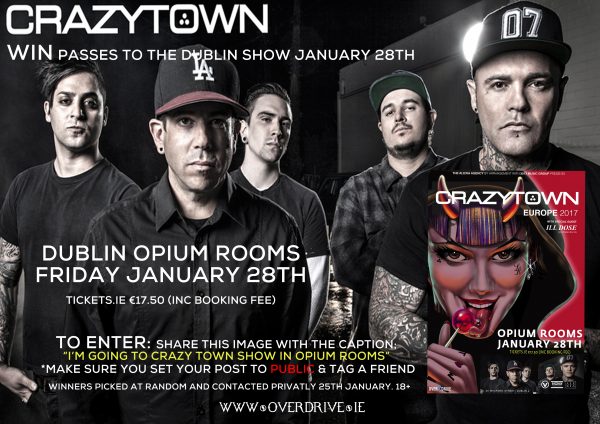 The winner will be chosen at random on Wednesday, January 25th and contacted privately by Overdrive. All entries must be 18+.

For more information on CRAZY TOWN in OPIUM ROOMS – Dublin JANUARY 28TH, simply click on the image below for access to the official event page. 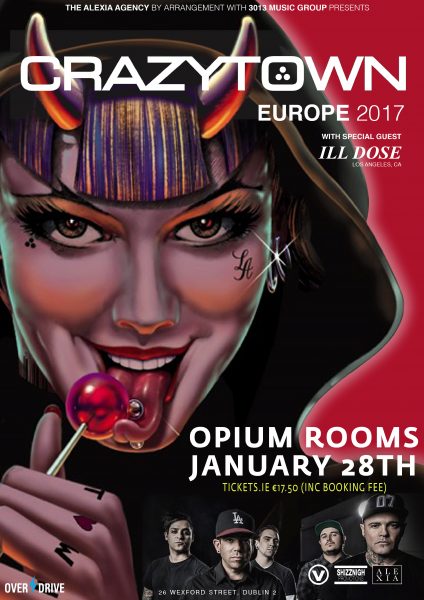 Crazy Town’s music and image reflected one of the most dynamic and volatile sociocultural environments on the planet — Los Angeles — where the urban squalor of the South Central district exists just minutes away from the glitz of Beverly Hills. Spearheaded by a team of producers/vocalists, Seth “Shifty Shellshock” Binzer and Bret “Epic” Mazur, Crazy Town combined hip-hop’s lyrical attitude and rhythmic sass with the muscle of live rock instrumentation. 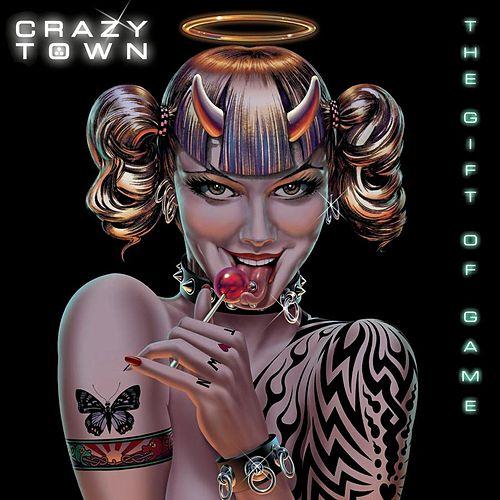 The combination yielded the group a number one hit in 2001, when “Butterfly” topped the Billboard 100 and helped push the band’s debut effort, The Gift of Game, to platinum status.

Licensed to IllBret Mazur and Seth Binzer were both surrounded by music while growing up in Southern California. Mazur’s father was Billy Joel’s manager, while Binzer’s father was an artist and filmmaker who directed the Rolling Stones‘ live movie Ladies & Gentlemen, The Rolling Stones. The two boys preferred a different style of music, however, listening instead to rap acts like N.W.A., Cypress Hill, and Ice-T, as well as alternative rock bands like The Cure.

Originally from New York, Mazur started crafting beats and cutting tracks at an early age and found himself working on records by MC Serch (of 3rd Bass), Eazy-E, and MC Lyte; he was also House of Pain’s DJ for a short period. Meanwhile, Binzer had come across a copy of the Beastie Boys‘ Licensed to Ill while in Mexico and discovered a side of hip-hop that inspired him to start making demo recordings on his own.

Binzer and Mazur initially came together as the Brimstone Sluggers and while the pair recorded plenty of music, their contributions to other hip-hoppers’ projects prevented them from completing a full album of their own. They also each ended up in rehabilitation clinics, where the two began writing letters that helped hatch the plan to form Crazy Town: a hip-hop band featuring a full instrumental lineup to complement the rapping vocalists. The group was to be rooted in classic rap-rock miscegenation like Run-D.M.C.‘s “Rock Box,” or Public Enemy and Anthrax’s collaborative effort “Bring The Noize.”

Check Your Head Doug “Faydoedeelay” Miller (bass), Rust Epique (guitar), Anthony “Trouble” Valli (guitar), DJ AM (turntables), and drummer James “JBJ” Bradley — a former session player who played on the Beastie Boys‘ Check Your Head album — were recruited to join the group, and Crazy Town was officially born. The band’s debut album, The Gift of Game, was produced by close friend Josh Abraham and featured appearances by KRS-One, dancehall toastmaster Mad Lion, and Dirty Unit. The album spawned a worldwide hit with “Butterfly,” an ode to attractive women, and put the band on the road to success. After 2002’s Howard Benson-produced Darkhorse failed to receive similar accolades, the band broke up in 2003.

The band’s debut album, The Gift of Game, was produced by close friend Josh Abraham and featured appearances by KRS-One, dancehall toastmaster Mad Lion, and Dirty Unit. The album spawned a worldwide hit with “Butterfly,” an ode to attractive women and put the band on the road to success.

The Brimstone Sluggers Crazy Town‘s members pursued production projects and solo careers as the decade progressed, but between Binzer’s myriad bouts with drug addiction and the death of DJ AM (2009), attempts to reunite the band never truly took hold. That all changed in 2013 when the Mazur and Binzer let fly in an interview that they were currently in the studio working on new material. The resulting Brimstone Sluggers — the moniker that the duo operated under before becoming Crazy Town — dropped in the summer of 2015. 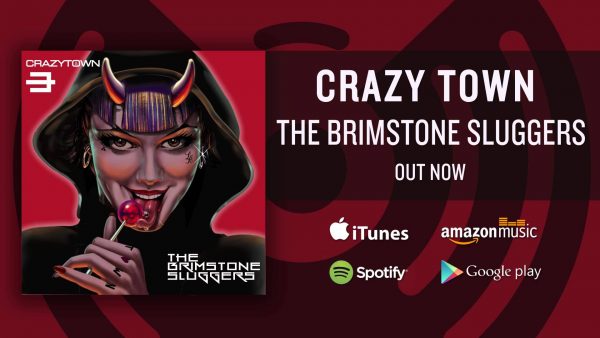 Venture Presents Crazy Town in Dublin’s Opium Rooms on Saturday, January 28th for one night only. Tickets are on sale now via Tickets.ie, priced at €17.50 (inc booking fee). 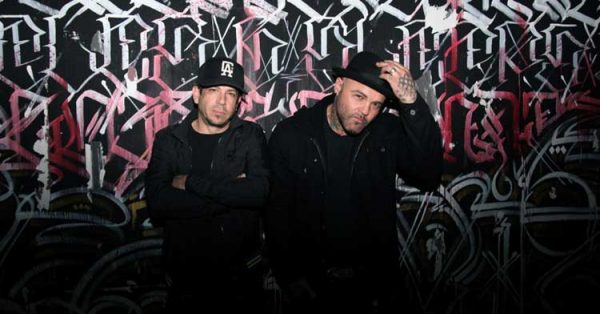