Rock’s most likeable icon, Dave Grohl has been everywhere of recent supporting his new documentary, ‘Sound City,’ which chronicles the legendary albums that have been the recorded at Sound City Studios, Grohl graced ‘The Colbert Report’ stage on Feb. 13 to promote the film.

With a list of achievements that would make any musician green with envy Dave Grohl added another feather in his cap as he took to the stage in New York City on Wednesday night to perform with the Sound City Players, a group of musicians who have recorded at Sound City Studios, including Grohl’s Foo Fighters bandmates, Rage Against the Machine drummer Brad Wilk, Nirvana bassist Krist Novoselic, Fleetwood Mac singer Stevie Nicks, rock legend John Fogerty + many more. Before the NYC performance, however, Grohl stopped by ‘The Colbert Report’ for an hilarious interview with host Stephen Colbert. 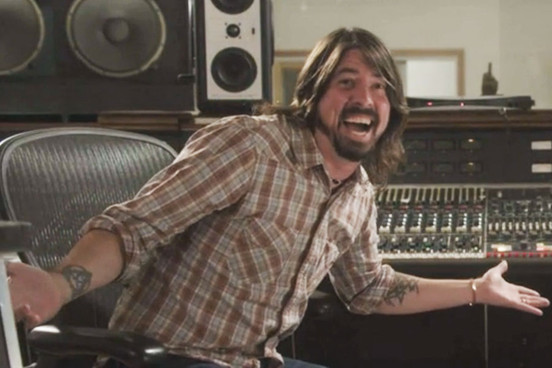 Having recently finished guest-hosting the E! talk show ‘Chelsea Lately’ for a week, Dave Grohl answered Colbert-esque questions such as, “You sold 30 million copies of Nirvana’s ‘Nevermind’ alone, why not phone it in and get fat?” and “Do you think about the [‘Nevermind’] sessions now and go, ‘Why didn’t we turn up the drums?’” After naming off a litany of artists who recorded on Sound City’s board such as Rage Against the Machine, Barry White and the now-imprisoned Charles Manson, Grohl shot the funny right back at Colbert. “The first thing we had to do when we got it [the Sound City board] was open it up and scrub all the cocaine and fried chicken out of it,” Grohl joked. “And that was just Barry White!”