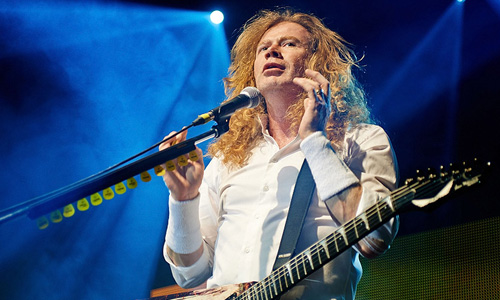 What ever you do, don’t heckle Dave Mustaine. One unlucky fan or possibly now ex-fan, was giving the acid tongue treatment from the Megadeth front man/guitarist before being ejected by security.

Mustaine had some harsh words for the fan who was apparently angry with the band on Wednesday night (June 05th) in Manchester, England. The band were said to have vacated the stage while some lightning issues were being addressed—a situation which allegedly caused the fan to begin to boo the outfit.

Mustaine had the fan ejected from the concert, but not before berating him with a homophobic slur. You can watch fan-filmed footage of that below. The band went on to finish their set after the technical issues were resolved. Megadeth‘s new album “Super Collider” hit stores earlier this week and is getting mixed reviews across the board.

Visit Overdrive for more information on our range of services including album cover design, poster design, electronic press kits, custom drum kits and much much more.