It’s nearly time for the new DEATH ANGEL album to drop and we couldn’t be any more excited! Arguably one of the most important thrash metal bands to emerge from the Bay Area, ‘The Evil Divide’ will be available to destroy your ears on May 27th via Nuclear Blast. But first!! Get a look and taste of what the band have in store for you with the release of ‘Lost’ single / video below! 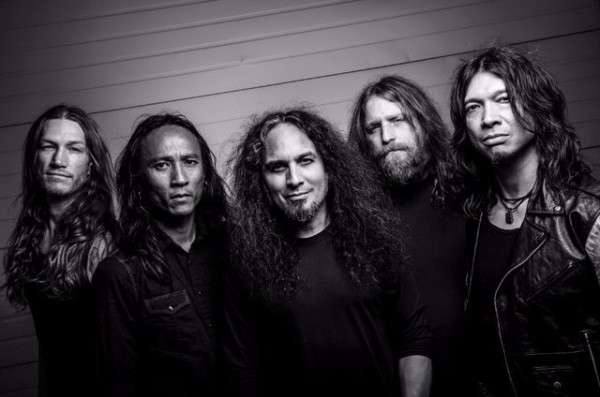 Thrash legends, Death Angel, will release their eighth studio album, The Evil Divide, worldwide on 27th May via Nuclear Blast. Today (May 25th), the band has released a music video for the track “Lost”, which you can watch below. The clip was directed and edited by Tommy Jones for Videohammer Studios.

“The song ‘Lost’ is very personal to me and I believe it will resonate with many. As one who has been fortunate enough to be raised In the San Francisco Bay Area (an extremely diverse region), I have made friends with people from every religion, race, sexual orientation, and genre of music fan! One thing that no one can escape, no matter what one’s beliefs are, or how well you were raised, or educated, is that one point in your life that you felt apart, or alone.

“It is an awful and disparaging feeling. Some are fortunate enough to have only experienced a fleeting moment of that empty feeling. More often than not though, it’s much longer than a fleeting moment, and time moves no slower than when stuck in that feeling. I myself am not immune to that human experience.

“I find the best release for me, and what makes me feel as though I belong / am doing something right / have a quality of life that is not measured by a monetary system, is creating music!

“This song is for and about all who have ever been trapped in that dark hole of your own mind. This is ‘Lost’! You are not alone!”

“When i first spoke to Mark about the lyrical context of the song, I realized that he was coming from 3 different mindsets, or 3 different narratives that would lead someone to feeling ‘Lost’. So there was a challenge to represent these 3 scenarios into the video for the song. They were pretty heavy, current social topics in the form of religious extremism, a bad relationship riddled with drug and physical abuse, and cyber and school bullying. Each of these situations, could make a person feel ‘Lost’ as to what’s right or what’s wrong, or a sense of being trapped in a situation that in your mind you know is wrong, but being stuck in it, makes you feel ‘Lost’. I also wanted the band to seem ‘Lost’ as if they were nowhere. So the setting of the video is that they are in complete never ending blackness.

“The rain was a necessity. With the power that Mark is belting out the lyrics ‘rain down on me’, it was a no brainier, I saw it in my head and needed to have him singing that last chorus in the rain. So we made it rain, yo!”

Receive “Father of Lies”, “Hatred United / United Hate”, “Cause For Alarm”, “The Moth”, “Lost” as instant grat tracks when you pre-order The Evil Divide via iTunes on this link.

The Evil Divide was recorded at Audio Hammer studios in Sanford, Florida with producer Jason Suecof (Trivium, Deicide), who previously worked on 2010’s Relentless Retribution and 2013’s The Dream Calls For Blood. Mastering duties were handled by Ted Jensen at Sterling Sound in New York City. Artwork was created by Bob Tyrrell.