Death Valley High vocalist Reyka Osburn took a little time out from his daily touring schedule to talk with Overdrive about the band’s new album CVLT (AS FVK), which was just released last week as well as a whole host of topics! Get it all below… 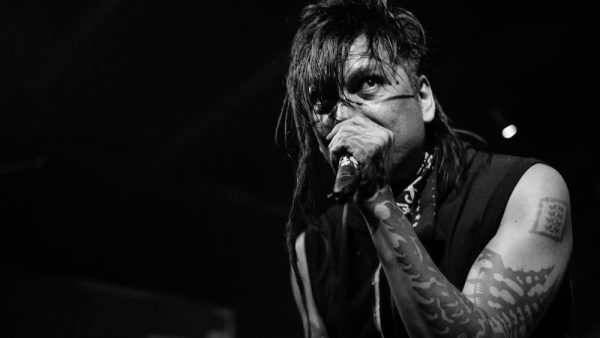 Death Valley High vocalist Reyka Osburn is a man with a vision. Having earned his stripes fronting Sacramento, alternative underground titans, Tinfed, to the rise and rise of Death Valley High, the singer’s perseverance and determination is a testament to the growing success of the Californian four-piece.

Kicking off an extensive European tour with Killing Joke in Ireland over the Haloween weekend, the Death Valley High frontman is in good spirits as he talks about the brand new album, his working relationship with former Deftones and White Zombie producer Ulrich Wild and his ambition in working with Azealia Banks and Brody Dall.

OD – The new album CVLT (AS FVK) was finally released on November 4th, can you talk a little about the lyrical inspiration for this album and the reason behind the title?

REYKA – I’d been listening to a bit of trap and hip-hop before tackling the lyrics and it did bear some influence. I’d like to think that there’s a bit more irony mixed in this time around. We wanted to expose our dark sarcastic side over our sentimental side, so we thought the twist of a traditionally gothic term with a more modern emphasis was the right title for the record. CVLT [AS FVK] is our romantic derivative on being “Occult as a Mother Fucker”.

OD – Death Valley High have a unique ability to blend a huge array of styles together, hearing everything from punk and new wave, however, is there a definitive influence on this album for you?

REYKA – Definitely, the two that you’ve mentioned here, but on this go-round we wanted to take some of the Deathrock sensibilities that we’ve played around with before and bring them to the forefront. That, and again, the influence of hip-hop and trap’s “darker” moments. 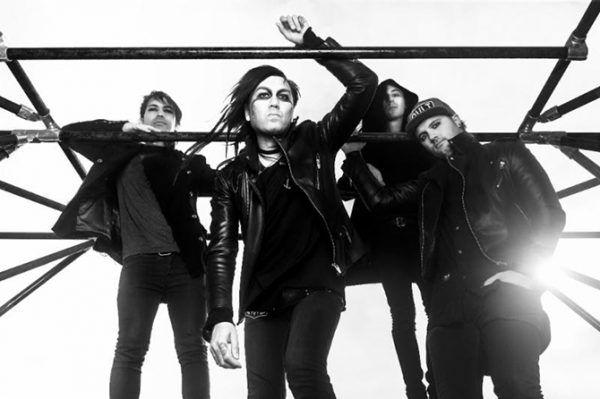 OD – I had read that Ulrich Wild reached out to you guys with regards to producing the album and there was a real connection in terms of chemistry. I know that you pretty much had pre-production in the bag, but was there a great deal of changes that took place once you started working together?

REYKA – We’ve always had free reign before, so when we got in with Ulrich, we had no idea what kind of rules or discipline to expect. I’m sure he adapts to all his different projects, but we were a tall order. I’m sure we’re a much noisier outfit than he’s ever done before. By the end, it was really cool to hear what he’d peel away or clean up.

REYKA – He’s very meticulous… Before, where we’d leave noise and discordance in, he’d find a way to streamline. He was great at reigning in our ideas and if they were worth keeping, he’d go the extra mile to make them work. He was a great balance for us.

OD – ‘Warm Bodies’ has been out there already as a ‘lead single’. What was the story behind that and the link to the video for ‘Ick Switch’?

REYKA – We wanted “ICK SWITCH” to be more of a barrage of images; making the audience feel icky. When we were working out exactly how to do this, our director Brian Cox came up with the idea to make it a prequel… Using the character in “WARM BODIES” we could see what he was doing just before his appearance onscreen. We thought it was a perfect tie-in, plus the best execution to present all these grotesque things. Brian added some live footage he shot of us in LA, and the marriage is disturbingly perfect.

OD – Although the album is not out as yet and I’m sure you are excited to have all of these new tracks that you want to share. Have you been playing any of the material live and if so, do you find that a new dimension comes to the material that you are so familiar with in a studio setting?

REYKA – We’d been touring a lot – the past two years really – in support of our last album, so once these songs were well rehearsed, we began to sneak in a couple per tour. We’ve never really thought too much about what a song requires live; it just works or it doesn’t. Although if the song is really popular, we know there are ways to Frankenstein it to life and keep all of its vitality.

OD – Can you explain the concept of the cover art and how that all came about? 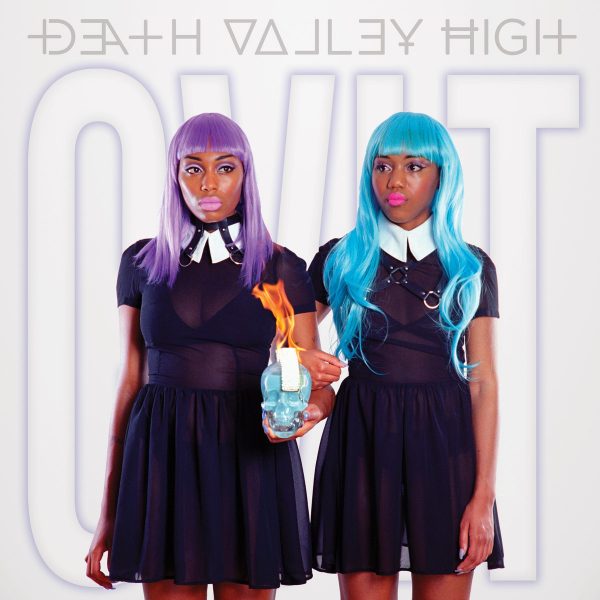 REYKA – When it came down to the album art, we’d had enough illustrations in the past and wanted to switch to photography. Since we had a notion that this album would be the first time many people would hear of us, we wanted to come back around to the band’s mascots – the twins of Death Valley High. We called a friend of ours, Parker Day, to see if she would be interested in doing something a little outside of her style and we told her our concepts. I thought for sure she would pass but she submitted her treatment for the shoot and it was just spot on. We’re very proud of this collaboration. Our band is an ongoing statement of doing things outside of normal gothic traditions, but still retaining our goth overtones. The album cover retains that same spirit.

OD – With regards to Tinfed, you commented that things got a little ‘watered down’ towards the end, leading to the formation of DVH. Are you very conscious about keeping a sense of evolution with the music that you’re writing now and deliberately pushing your boundaries? 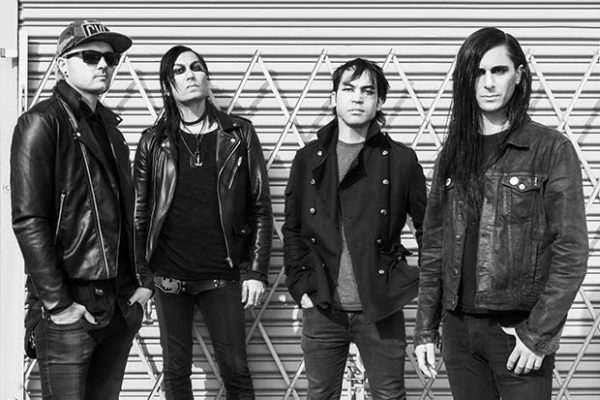 REYKA – Indeed. We want to keep chasing down our own “perfect song” which hopefully will lead us to our best album to date. But even once that’s done, you have no other choice but to outdo the last effort, or die trying!

OD – The creative process is something that can’t be switched on or off and just happens, have you been continuously writing and banking ideas since recording the album?

REYKA – Yes. In fact, I’ve been collecting notes, lyrics, and recordings of such things. We even have recordings of drums that we purposefully ditched in order to stay on time to finish this record. So all that’s needed is guitars and vocals. Not to mention, all of the bits and pieces of songs that never even made it as far as pre-production. We’ve found that having a bountiful choice of material makes it easier to cut out any of the rougher ideas, last minute.

OD – There is no denying that you are a hard working band that has spent a considerable amount of time on the road and in this case, you’re out with Killing Joke. I know that you have done a few shows here and there in Europe but would it be safe to say that this is the most extensive European tour you have done to date?

REYKA – We are reaching into areas on this tour that we’ve never played before. Even in the citie’s we are returning to, we will be playing much bigger and more suitable audiences. We are extremely grateful to Killing Joke for taking us to all of these new places and faces.

OD – We know you collaborated with Deftones back in 2003, but I wanted to ask if you could collaborate with any other artist on DVH material who would it be?

REYKA – It’s always fun to do collaborations with friends and I’d love to keep that up. But as far as a “wish list”, I’d really like to see what a collaboration with Diplo or Evian Christ would turn out. Eventually, I’d also really like to see what a remix would sound like from SBCR (aka The Bloody Beetroots). Rifo, I know you hear me on this! But sorry, I’ve only mentioned producers! To answer with a “wish list” performer, it probably has to be Brody Dalle on one end, or Azaelia Banks on the other.

OD – We all have a series of defining albums that have shaped us all and provided a certain soundtrack to moments in our lives, do you have a particular album that means a lot to you personally?

REYKA – There are so many! Oingo Boingo’s Nothing to Fear to Godflesh’s Pure… It gets really hard to say what shaped me. Maybe NIN‘s Downward Spiral might be the closest answer I can think of without withdrawing straight away!

OD – As I mentioned, you are out with Killing Joke on this tour which will see you right up to December. What are the plans for 2017?

REYKA – We’ll be back on the road in January for another month long run of North America. Directly after that, we’ll be back to Europe and the U.K. in March/April. Then, we’ll hopefully be back to the EU for Summer 2017 festivals! There’s probably more coming that I don’t even know about! 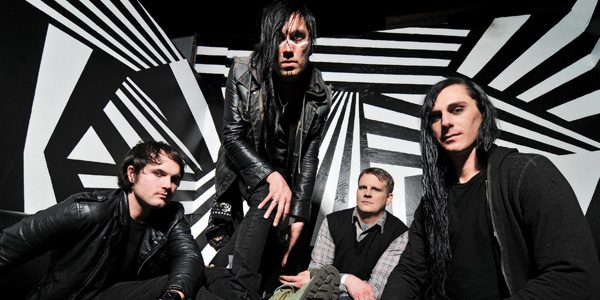