On occasion you hear a gig announced and you are just pushed to the edge of giddy, this gig was once such announcement, and as much as I love Delain it wasn’t them that had me in this state, it was the chance to finally catch the magnificent Evergrey live that pushed me over the edge. But this is a very strong lineup top to bottom, with more debut Irish performances in a year where we’ve been lucky enough to have a lot of first-time visits to these shores. 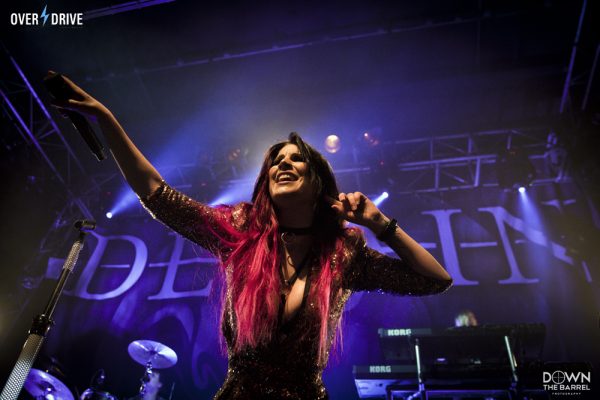 Opening tonight’s show are Canadian’s, Kobra And The Lotus, fronted by the lovely Kobra Paige, who informs us during the set that she actually spent a couple of years of her life living in Dublin. The sound isn’t great on the first song, but it’s not always easy to get things as you would like them when you haven’t had the benefit of a line check of the equipment. 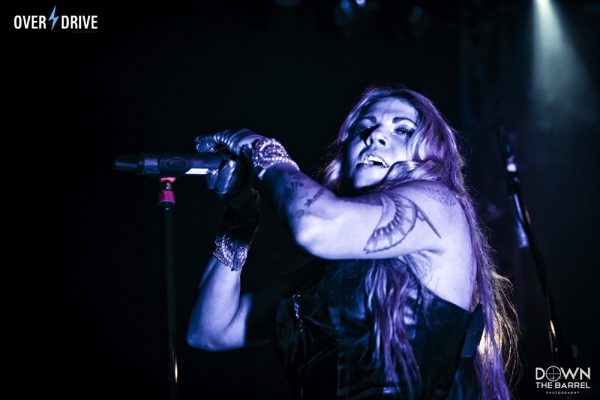 Having said that, everything settles as they push through their set of classic sounding Metal, which has a good edge to it, Kobra has a really great voice which is 100% suited to the music they play, and the reaction of the crowd gets better the more they play. It’s only a short set tonight the show openers but highlights are the new song “TriggerPulse” which is a bit fresher sounding to me than a lot of their work to date and it somehow seems to have more control, good signs for the new album. 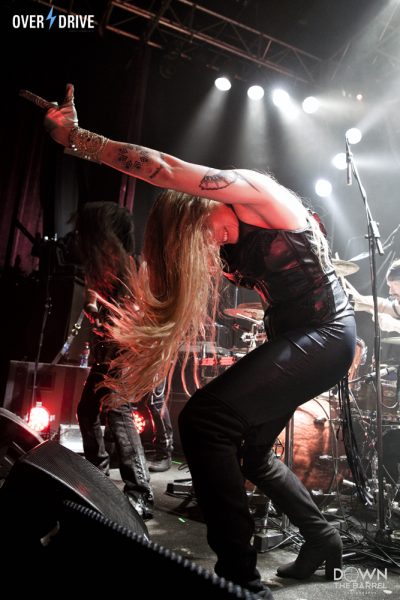 Alongside that the set closer “50 Shades Of Evil” is a great way to end this short and sweet introduction to the band. Although Kobra is obviously the focus point of the band she’s surrounded herself with a really good and energetic group of musicians. Personally, their music didn’t really grab me, but I appreciate what they do and was carefully checking out the crowd’s reaction throughout the set and there is no doubting they left the Button Factory stage with some new fans tonight and I’m sure they will be back on our shores soon. 3.5/5

There’s a real genuine level of excitement around the building as the time approaches for Evergrey to launch their assault on Dublin for the first time, having released some of the best albums of recent years this was a moment causing visible shakes for me. Swedish progressive metal titans as they are it really is brilliant to see them hitting the stage in the Button Factory, Hymns For The Broken was one of the top albums of 2014 and The Storm Within is definitely one of the best releases in 2016. Tom Englund’s vocals are definitely a vital element of their sound, and live wow, stunning. We have been very lucky this year to have had a number of the very best progressive metal bands visit these shores if we could see Fates Warning over here that would just be the icing on the cake. 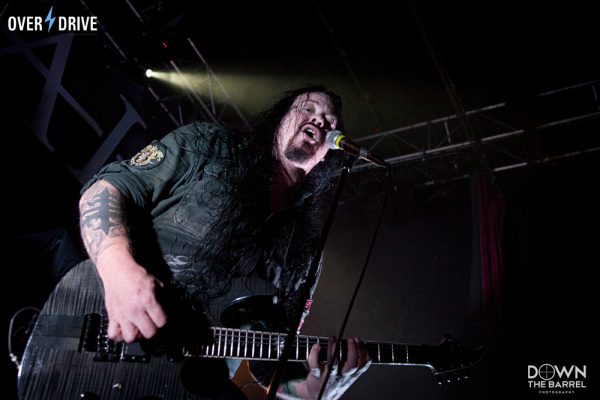 When the stage times were released it was immediately obvious that the “Special Guests” slot tonight was going to do nothing but whet the appetite of the fans in attendance. Opening up with “Passing Through” from the excellent recent release The Storm Within really does kick things off perfectly, there’s no doubt left about just how good this band are.  We only get a couple of tracks off the new album tonight but really good choices in the aforementioned “Passing Through” and the excellent “In Orbit” (sadly without a guest appearance from Floor Jansen) but the song is still terrific with just Tom on vocals. The rest of the set is made up in the main of tracks from Hymns For The Broken and a smattering from the previous few albums, were there to be any criticism it would have been nice to have had something from the first four albums, but perhaps with the time limitations the band wanted to show off where they are now musically and we could get a wider range of songs on their return visit, there needs to be a return visit. 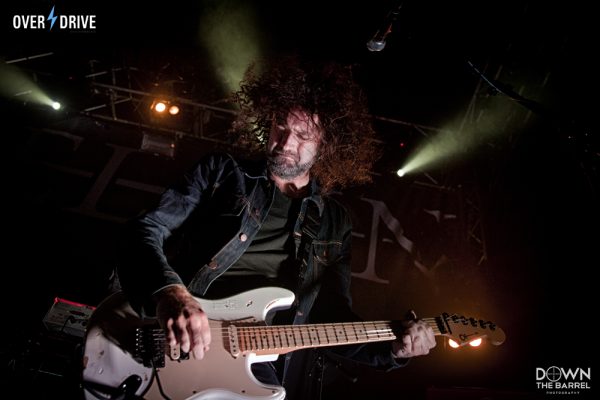 The music is full of power, passion and precision, another band you could just watch all night and pick up something new every turn of your head, there now be a large amount of songs present in the set, but damn it’s quality, “Black Undertow” shows off not only the many subtleties in how they craft a song, but there’s intensity, a build of power, pounding drums, slicing riffs, but time and again I’m drawn back to Tom’s vocals. It’s one thing to hear a singer like this produce power in unison with such depth, it’s a joy to behold. It all fly’s by far too quickly, and tonight we need more, it’s like getting a taste of your favourite dessert, you just want another spoonful. Songs like “Leave Us Behind”, “Broken Wings” and the powerful “A Touch Of Blessing” all illustrate different aspects of the band while all fitting together really well. Ending the set on the brilliant “King Of Errors” the band assure us they will be back, the audience wants more and a quick return would be welcome.

It’s one thing to hear a singer like this produce power in unison with such depth, in fact, it’s a joy to behold. It all fly’s by far too quickly and tonight we need more, it’s like getting a taste of your favourite dessert, you just want another spoonful. Songs like “Leave Us Behind“, “Broken Wings” and the powerful “A Touch Of Blessing” all illustrate different aspects of the band, while all fitting together really well. Ending the set on the brilliant “King Of Errors” the band assure us they will be back, the audience wants more and a quick return would be welcome.

Evergrey is definitely one of those bands that everyone should get to see.  Brilliant musicians, a singer that makes everything look just so simple and songs that are full and rich and sound so damn good live, there is so much substance behind the style that the music speaks for itself. Any band that has the ability to force you to focus on different elements as they shine withing a song, is a special band indeed. 5/5

Leave It Behind Us

A Touch Of Blessing 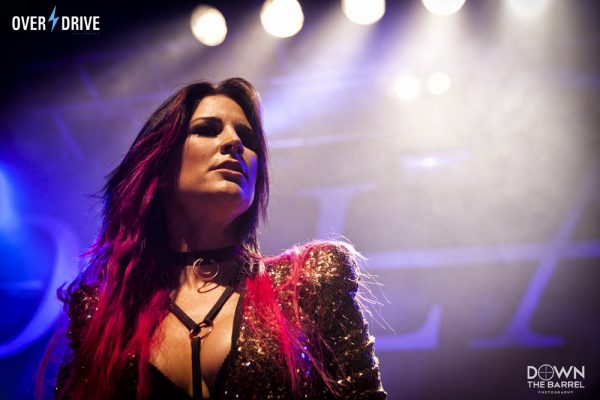 Dutch symphonic metal band Delain have often been mentioned as some people’s guilty pleasure, I don’t really see why, an excellent band that create really great music, not just having a terrific focal point in the great vocals of Charlotte Wessels, but a vibrant high energy band that make everything work so well together. The songs are punchy and uplifting, on occasion gritty and always entertaining and the band are always interesting to watch as there’s a bit of perpetual motion going on once they get going. 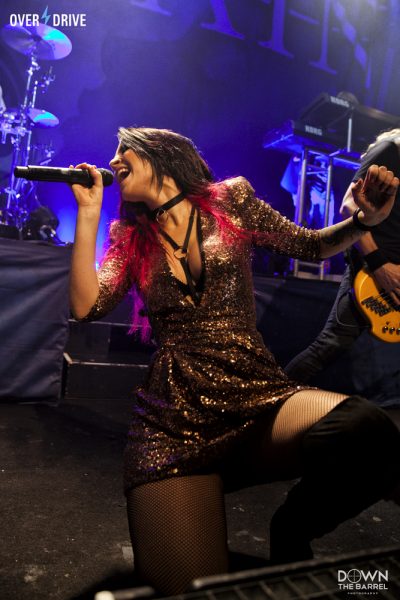 Charlotte’s voice is just unbelievable, such a powerful and beautiful instrument to use and their songs are so very well put together to take advantage of it, whether it’s a powerful rocker or a floating ballad. Tonight’s show is part of the Moonbathers Tour, so naturally there was always going to be a decent number of tracks from the new album, in fact for this set we get a total of seven tracks. To kick off with a brand new triple header may be seen as a brave move, but the quality of the songs just pushes things along at a great pace. Suckerpunch is exactly that, a song that starts off very softly with Charlotte building from an almost spoken word style into an anthemic rocker.  The backing vocals really add a punch to this song, in fact throughout the set the backing vocals of Otto (Bass) and Timo (Guitar) are very important to the overall sound. It’s very evident from early on in the set that the crowd is getting more and more into this and it’s hard not to. It’s really hard not to have a big smile on your face when watching and listening to this music.

Highlights tonight are the killer “Fire With Fire” which is just a melodic rock-monster with extremely catchy riffs and a track with that little addictive quality, and when it gets to the chorus it bursts out again, the room is moving again at this stage and another magical night in a great week of shows is upon us. 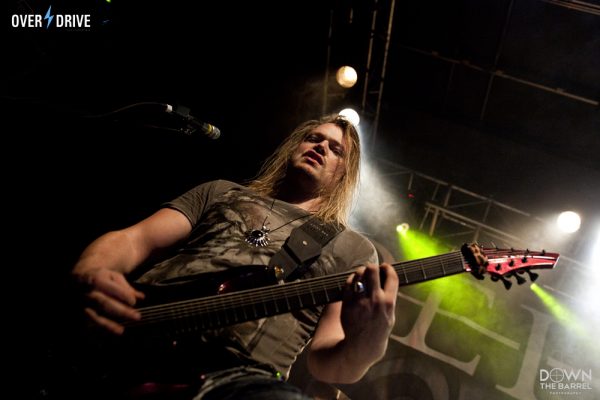 Add in a beautiful version of “The Gathering” from their debut album back in 2006, where once again Charlotte shines like the sun, but as mentioned, it’s very much more than just a wonderful singer.  This band is a fully flowing and functioning unit, that just has a great balance in their music, Timo and Merel (Guitars) move between crunching riffs and bounce off each other, while Otto, along with his bass duties, adds some really dirty vocals to the mix, that help add a different element.

Another of my favourite tracks of the night is Mother Machine, which is one of the heavier tracks the band has to offer, there’s a little more aggression in the opening of the song and that just continues, it just rumbles and switches so quickly with the change in vocal style for the chorus, another great track and powerful drums from Ruben. Everywhere both live and on record Martijn (keyboards) is such a key component of their sound, the layers that are added to the music make a massive difference to the overall feel. 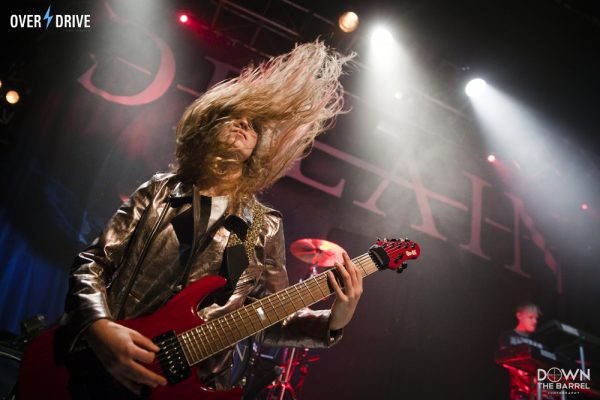 Just looking at the faces of the band members during the set, you really can tell that they are wondering why they haven’t been to Dublin before. They are having an absolute ball and seem genuinely delighted with the reception they have been getting from an Irish crowd. If they were allowed to they could have played all night and there’s nobody in the venue that would have complained about that, except maybe the staff.

Ending the set with the title track of 2012’s We Are The Others album, was another great idea.  A powerful, bouncy track that had a lot of people moving in the exuberant crowd. A truly wonderful performance by a band that just seems to be getting better and better with time, and there’s more to come.  After 10 years it seems that they are really just hitting their stride now. Delain is a very hard working band that has just about perfected what they do. There just aren’t that many bands out there at the moment that put on a show with this much intensity and passion. 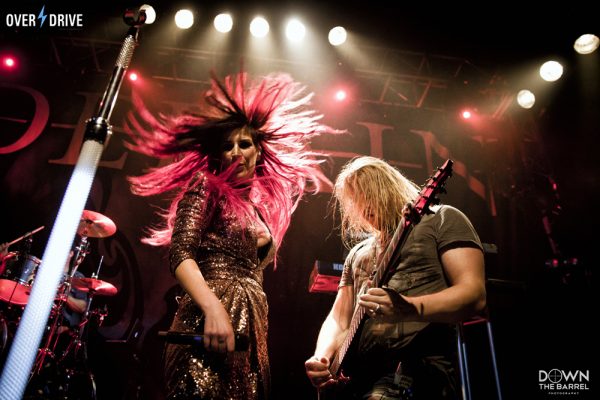 Another night of top class metal, a little different to what we normally see in Dublin and it’s another massive thank you to DME Promotions for assuring we have shows like this to attend, long may it continue, the variation in choice at the moment it brilliant. 5/5

Glory And The Scum

We Are The Others

Photo Gallery courtesy of Down The Barrel Photography © 2016