A neck-breaking Thrash attack pulled into Dubin’s Voodoo Lounge on October 5th with a blistering line-up consisting of DESTRUCTION, FLOTSAM & JETSAM, ENFORCER and Brazilian three-piece, NERVOSA!  Overdrive was there to capture every last morsel of metal! Get the full scoop below.. 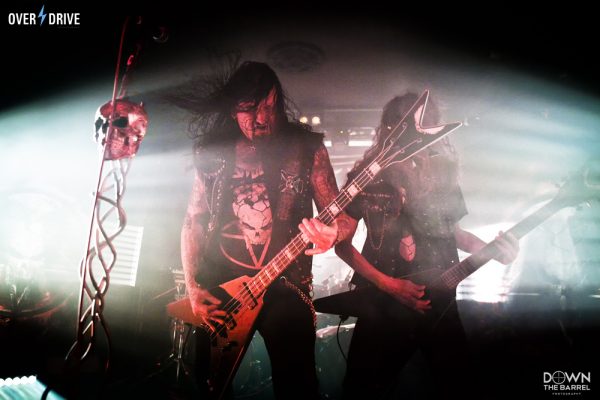 From the moment that this show got announced a child like giddiness came over me, yes I love Destruction and getting to see them again on Irish shores was great! Having Enforcer back again so soon is also brilliant and a debut Irish performance for Brazilian Thrash juggernaut Nervosa; who have released one of my favourite albums this year – damn yes that’s exciting too!

But on a personal note, the chance to see Flotsam & Jetsam live for the first time ever, trumps everything by a mile, taking me right back to listening to Tommy Vance’s Friday Night Rock Show on BBC radio over Medium Wave (yeah that might confuse the kids a bit) on a Friday night in the mid 80’s when I first heard the scream at the start of “Iron Tears” from the classic debut album Doomsday For The Deceiver. This night has been some 30 years in the making for me and I’m sure a number of others. Once again DME Promotions are making dreams come through, and tonight it’s going to be Dreams Of Death. 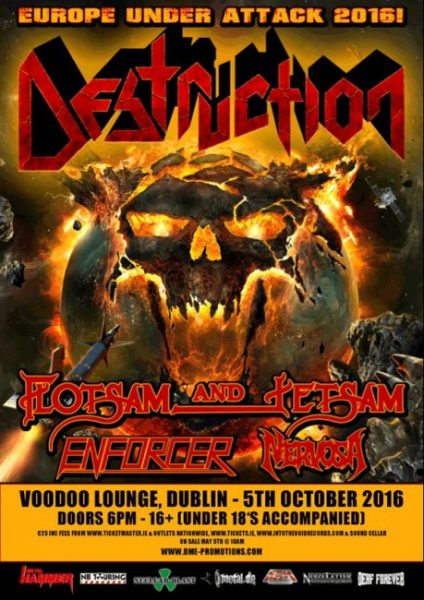 Arriving at the Voodoo Lounge, it’s nice to see that they continue to work on improvements to the venue itself, tonight we’ve got a proper barrier and the second set of front house lights, it has been a while since I’ve been here, but when you notice bits and pieces of changes that all go to making a better venue and therefore a better show it’s great, whether it’s permanent or not or temporary for tonight it looks great.

Kicking off proceedings are the brutal Brazilian 3 piece Nervosa, a band that have been getting more and more press as their career develops, their latest album Agony really is a terrific slice of death-tinged thrash. It brings a smile to the face when a sizeable crowd makes the effort to show support for the opening band and although it’s only 6.30pm, it’s pretty obvious that Dublin is eager to check out this band. In fact, this is probably the most impressive turn-out for an opening band in a hell of a long time. 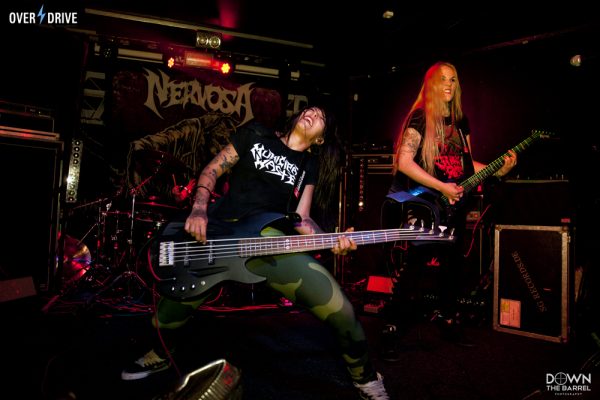 Nervosa waste no time in ripping the Voodoo Lounge a new one! Led by Fernanda Lira (Vocals/Bass), who commands a great presence with her venomous vocals, crushing riffs and screaming solos. This Brazilian three piece fire cannon loads of cut-throat riffs thanks to the snarling talents of Prika Amaral (Guitar/Backing Vocals) whose tandem attack with Fernanda, work seamlessly together laying down a chaotic pathway for Samantha Landa (Dead Asylum) who is smashing the kit in every venue on this tour, as she is filling in for full-time drummer Pitchu Ferraz. Naturally, a lot of the set is going to come from the new album and that’s no bad thing the new tracks are monsters live, especially “Hostages” which is the set highlight for me, absolutely bludgeoning track, along with “Arrogance”, both from the new album. 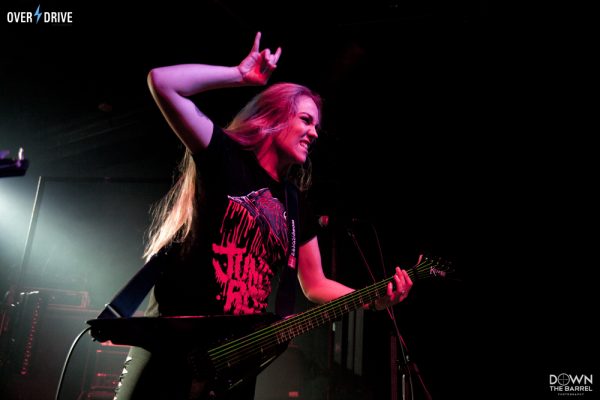 The warm reception from the crowd tonight seems to be doing its job as Nervosa just increase the brutal magnificence of their performance with each song. What a blinding debut performance this was! Their return can’t come soon enough! If you like classic Brazilian thrash with a modern edge and that touch of death metal, this is a band you should not miss, should they happen to be playing in your area. Utterly fantastic! 5/5 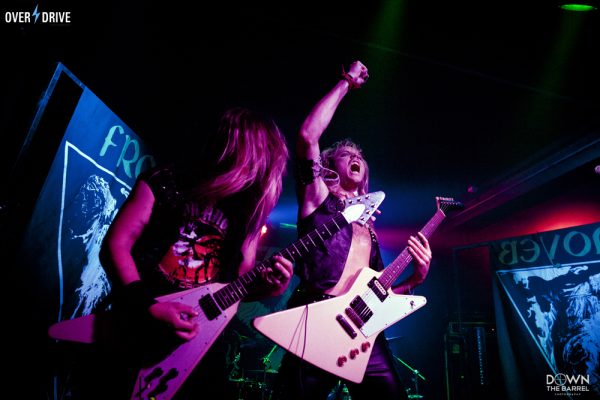 Sweden’s Enforcer have always been an intriguing band for me. Almost a cross between old school metal, speed metal and something a little more sleazy, Enforcer are consistent with their quality live performance that are jam packed with tonnes of energy and dare I say, fun! Tonight is no exception, with Olof (Vocals/Guitar) coming flying to the front of the stage like a coil that’s just been unsprung and Tobias (Bass) as intense as ever, attempting to involve every last member of the audience in the show, Enforcer are on fire tonight. 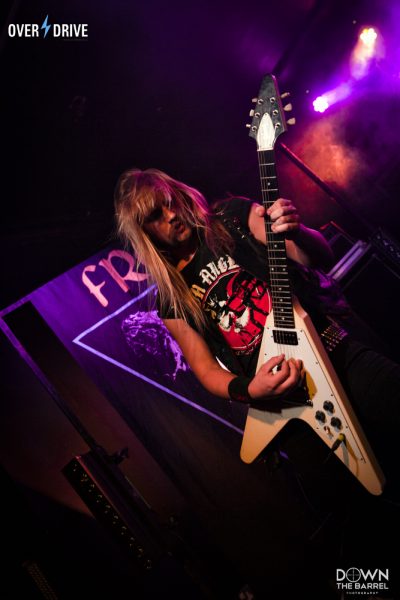 Opening track “Destroyer” rips along in classic style with one of the faster tracks “Hell Will Follow” following. The bulk of tonight’s set again comes off From Beyond, which is no bad thing, as it’s a cracking album.  We were treated to a  couple of other tracks from their earlier releases, ‘Mesmerised By Fire’ from Death By Fire being the one that sticks in the mind the most and it also has a much heavier delivery live. Watching them on the Voodoo Stage there’s always that feeling that they were made to play larger venues and wouldn’t it be so much more appropriate to have bellowing fire while they played, but maybe that will come again if it does I’d be there. Finishing up with “Midnight Vice” which really has a large leaning towards NWOBHM and works perfectly for this band. Look forward to seeing them visit us again soon with new material, always a pleasure to see them do their thing. 3.5/5

Flotsam And Jetsam may have taken their time getting over to Dublin, but 30 years in the waiting is totally worth it as they executed a perfectly balanced set-list for tonight of old and new. There’s certainly an air of expectation and excitement in the room leading to their performance. In my opinion, Flotsam & Jetsam are one of the more “elegant” thrash bands from the glorious 1980’s and one that has kept active over the years releasing 12 full studio albums, as well as remaking No Place For Disgrace in 2014. 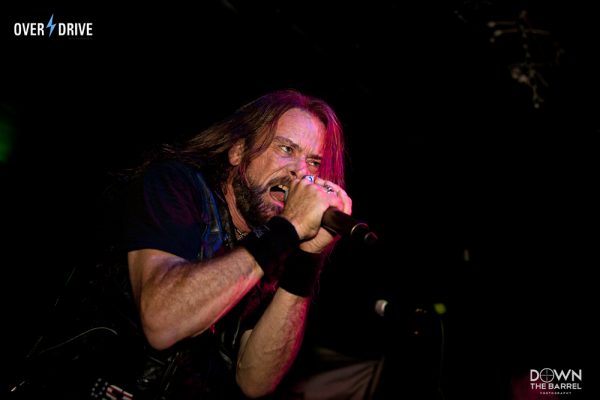 The set starts with a track of the new album, “Seventh Seal” which is a terrific track and may just have given a shock needed to anyone present, that hasn’t heard the new album. This is classic sounding Flotsam & Jetsam folks. Glorious twin guitars and the additional power that Jason Bittner (Drums) has brought to the band over the last couple of years has added nicely to the levels of aggression in the music. Can see this track being in the set for a long time to come, it’s a great starter with the lead intro.

As soon as the riff kicks in I look around me, the guys beside me just look at each other with beaming smiles, you can just tell that a large number of people in the middle are about to lose their shit, as am I, “Dreams Of Death” from the classic No Place For Disgrace, sees everything come together as it should. 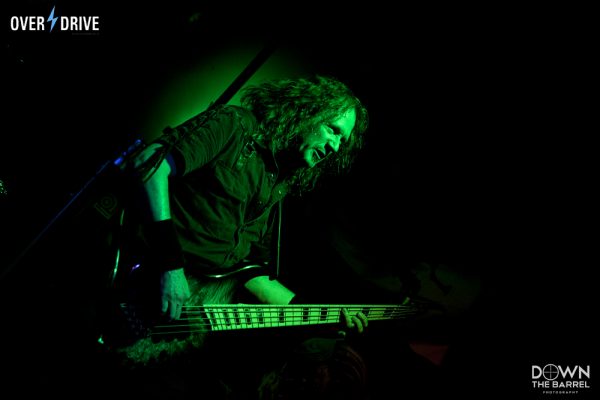 It would be impossible for the guys to cover everything from their career in such a short space of time but tracks from Doomsday For The Deceiver, No Place For Disgrace, Drift and a healthy dose from the new album is a great balance and is going down exceeding well before the Dublin crowd. Highlights “Hammerhead” and “Desecrator” just sends people over the top, with some stage diving and crowd surfing adding to the atmosphere. “Life Is A Mess” sticks with me the most as it pretty much sums up for a lot of people why you go to a metal show, to let the music take you over, raise your fists with people you don’t know and take a step away from the crap that life can sometimes throw your way. The band are a very tight unit in 2016, with some excellent guitar work from Gilbert and Conley, they work so well together and as always Michael Spencer (Bass) is so solid behind them. What a terrific Irish debut, the second of the night, really hope that this band gets back over for a headline show soon, terrific set and again on a personal note, so worth the wait. 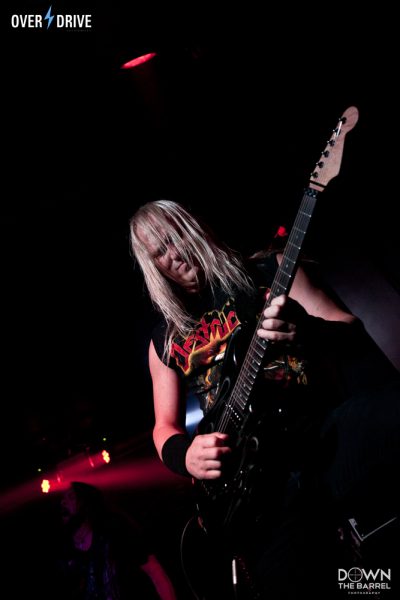 I’m not going to cover every song as they did it here but seriously; smashing out “Hammerhead” and “Desecrator” just sends people over the top generating some stage diving and crowd surfing antics; which just adds to the electric atmosphere. Of the tracks from the latest release on offer tonight, “Life Is A Mess” sticks with me the most and resonates with the Voodoo Lounge. We need to get Flotsam & Jetsam back over to Ireland for a headline show in the near future. Tonight was a lesson in quality old school thrash and well worth the painfully long wait. 5/5

And finally, onto tonight’s headliners, Germanic thrash legends Destruction, one of the Big 4 of Teutonic thrash, alongside Kreator, Sodom, and Tankard. It’s almost 2 years since the band last paid us a visit, again in the same venue and that was the memorable night of chaotic thrash shenanigans. The anticipation for Destruction was swelling throughout the venue and as we reached our climax of patience, the band finally hit the stage, to a phenomenal response.  Still a very powerful unit, Destruction waste not time in getting stuck into their recent Under Attack release, which is one of their strongest albums of recent times. They power off the starting blocks with the title track off that album, and they keep the intensity high with a real crowd-pleaser in “Curse The Gods”, tonnes of energy front of stage, bodies are moving and on and above the ground, the choir of devastation is being led as always by Schmier (Vocals/Bass) and Mike (Guitars), as it has been for many years, with Vaaver (Drums) being the baby of the band having only been a member since 2010. 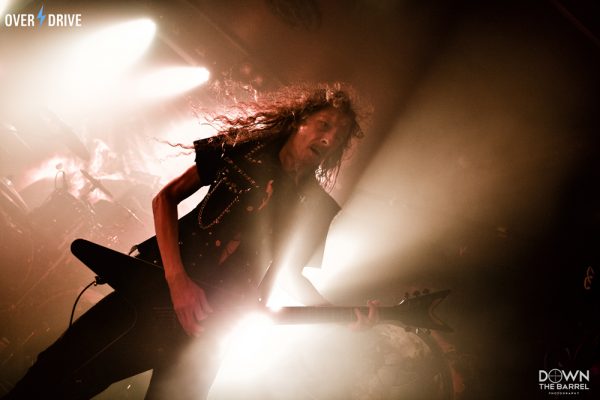 Destruction really live up to their name, as they execute a whirlwind of thrash metal covering their entire career. It would have been great  for a little “Generation Nevermore” in the set but we did get a good working of the new album tracks, so can’t complain.

Oddly whenever I hear the name Destruction the riff from “Bestial Invasion” automatically enters my head, as it has done for many years now, so there was no way they were getting out of Dublin without playing this one, it’s always been a standout track and finishes any set on a high note. Destruction, a band that always perform, still have the required levels of aggression and have the ability to release new material that works live. Having said that tonight wasn’t all about the headline act. Dublin saw debut performances from a rapidly rising three piece Nervosa and a masterful showing from thrash masters Flotsam And Jetsam. Another awesome night with 4 very different bands giving their all, live music really is where it’s all at. 4/5

Check out the full gallery of the show on the sliding gallery below;

ALL IMAGES BY DOWN THE BARREL PHOTOGRAPHY © 2016

** Please seek permission to use any of the images in this feature. Thank you.