Fans have waited six years to see Destruction grace a Dublin stage again, and Overdrive were there to witness the finest in German Thrash. With support from Evil Invaders, Lost Society and Shrapnel the crowd was all warmed up and ready to go in the Voodoo Lounge, Dublin. 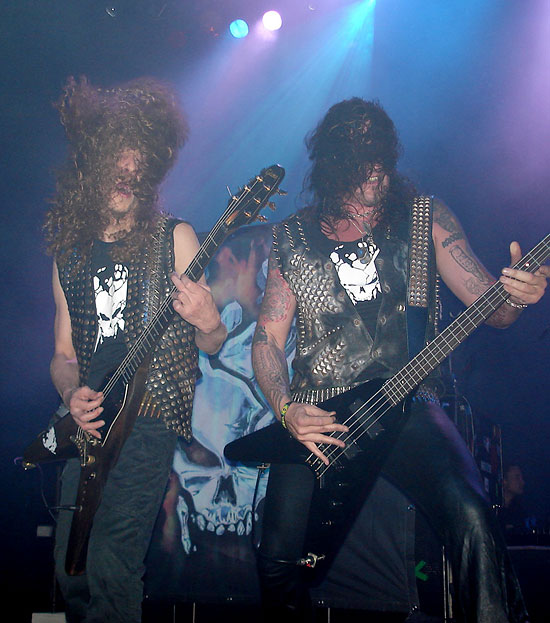 One cannot help but feel apprehensive upon walking into the venue. Plunged into pitch black, with only six small stage lights and red neon lights behind the bar the venue is minimal but has potential. The performance opens with a light show to a string ensemble which creates unease among the crowd; people start to move towards the stage, pushing up against the barrier in anticipation. The first pounding chords of “Total Disaster” sound off and the audience goes wild. From the opening, the band is active and in your face much to the joy of all in attendance. Both Mike and Schmire run around the stage, in a chaotic display of Thrash fury using any of the three mics that line the front of the stage, proving that after all those years they can still give the young lads a run for their money!

Hints of a mosh pit from the opening bands Shrapnel, Lost Society and Evil Invaders,  take full flight immediately, along with chanting the band’s name. Before the start of ‘Armageddonizer’ drummer Wawrzyniec, eggs the crowd on by initiating a drum beat which the crowd chants “Destruction” to, and which runs smoothly into the track. The crowd start to ask for ‘Tears of Blood’ shortly after and are reassured that the band will be taking requests later in the show. The next part of the set transports the venue back to 1985 with a track from Infernal Overkill – the anthem ‘Black Death’. This sends a pulsing wave of sweaty energy throughout the venue and many a beer being split without care. It is at this point that the entire venue (including bar staff) are transported to the kingdom of Thrash, where the riffs grow plentiful.  It is impossible to stay still; there is a sea of people head banging from the back of the venue to the front all the while with beaming smiles.

At this point Schmier thanks the crowd for the on going support, also praising the young bands and fans for continuing to carry the burning torch of Thrash . Schirmer ends by wishing to see a new generation take the Wacken stage before ripping into ‘Eternal Ban’ which finishes their set.

Another light show divides the performance before the opening chords to Release the Agony come seeping out the venue PA. Although the band are mostly German, Schirmer introduces the drummer, Dramowicz, as Polish saying that for once a Polish football team has beaten a German team. This interaction really gets the crowd talking as German and Polish members of the audience start to talk amongst themselves.  Marcel continues his interaction with the audience by asking all the women in the venue to make some noise. He proclaims that without them Thrash Metal would not be able to continue and the next song is dedicated to them – “Carnivore”.

The crowd have started to wane, many moving to the sides to make room for the young avid moshers and Marcel asks for the mosh pit to be resurrected for the next track “Hate is my Fuel”. The crowd do not need telling, as this is exactly what they need to get moving again. They chant along to the band, all energy restored. Once this song is complete bassist Schirmer asks for a beer which he raises to Ireland declaring “Failte Ireland” before throwing it into the crowd and uttering “I think a girl caught it”.

The bassist then asks people to shout out requests as the band wants everyone to enjoy the show and to hear the songs that they like. The predominant requests are between “Tears of Blood” and “Death Trap” and after a quick vote “Death Trap” is decided on. The crowd goes wild upon this decision with the mosh pit getting gloriously violent. What is great about gigs like this though is the community spirit whereby bystanders will help those who have fallen to get back up. No one is left alone.

The band fulfills the wishes of the crowd and plays “Tears of Blood” next before finishing with a “classic track” off their album Infernal Overkill Bestial Invasion. The band walks off the stage for a few minutes before appearing again to finish the show with a bang.

Their encore is exactly what the crowd was waiting for. “Curse the Gods” and “The Butcher Strikes Back”. The band thanks the crowd for their support, remains for a few pictures and then disappears. The gig is not easily forgotten though, as streams of people leave the venue echoing the lyrics to “The Butcher Strikes Back” as they disappear into the October night. Destruction did exactly what is expected from them and you would be a fool to miss them should they come back around again.

Nailed to the Cross

Hate Is My Fuel

The Butcher Strikes Back