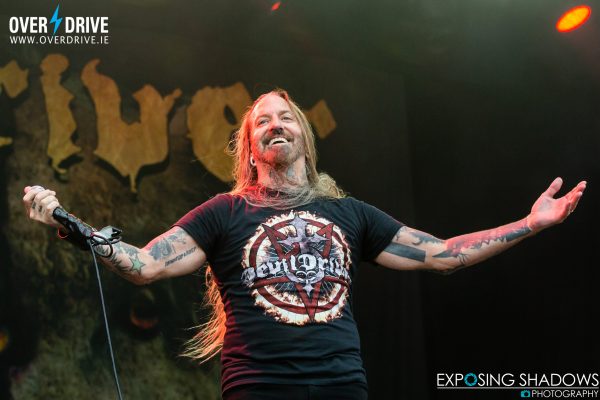 The five-piece have since become a constant and dynamic force in the metal world over the best part of the last two decades.  Originally signed to Roadrunner Records, in 2003 the group then featured guitarists Jeff Kendrick and Evan Pitts (who was replaced by Mike Spreitzer later that year), bassist Jon Miller and drummer John Boecklin.

It’s been a constant uptick for the Southern California quintet since they first blasted a hole through the zeitgeist in 2003 with their pivotal self-titled debut. Their almost psychotic dedication to the road is legendary and their mastery of the circle pit beyond dispute. Now their fans can get their hands on their catalogue in revamped, remastered form, with all but one title being pressed on vinyl for the very first time.

The five albums being reissued are ‘DevilDriver’ (originally released in 2003), ‘The Fury Of Our Makers Hand’ (2005), ‘The Last Kind Words’ (2007), ‘Pray For Villains’ (2009) and ‘Beast’ (2011).  The releases have been remastered by Andy Pearce (Black Sabbath, Motorhead, Anthrax, Kreator) and will be available to buy on limited edition coloured vinyl and in deluxe CD format, many featuring bonus tracks and all featuring expanded liner notes and exclusive interview material with frontman, Dez Fafara.

For all albums with the exception of ‘Beast’, it’ll be the first time ever they’ve been available in vinyl form (each will be limited to 500 copies in the UK). ‘The Fury of Our Makers Hand’ features six rare bonus tracks, ‘Pray For Villains’ includes four bonus tracks and ‘Beast’ includes three additional cuts.