DME Promotions have confirmed that Devildriver will be taking to the stage on April 8th 2014 with Sylosis and Bleed From Within. It would be rude not to attend this show! 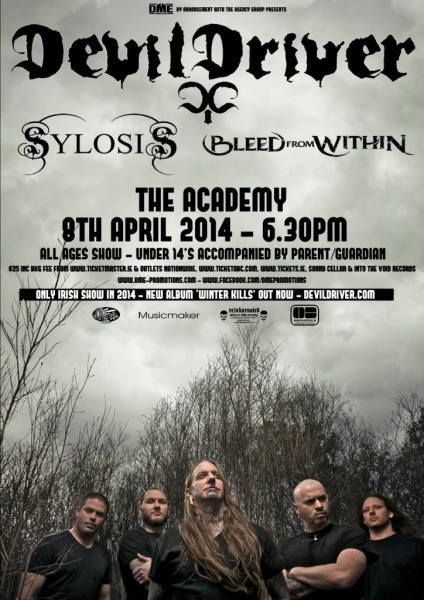 DEVILDRIVER’s sixth album, “Winter Kills”, sold around 11,000 copies in the United States in its first week of release to debut at position No. 32 on The Billboard 200 chart. This figure is in line with the opening number of DEVILDRIVER’s fifth CD, “Beast”, which also shifted 11,000 units back in February 2011 to land at No. 42.

The instrumental parts for “Winter Kills” were recorded at Audiohammer Studios in Sanford, Florida while the vocals were laid down at Dez Fafara’s home studio, with Mark Lewis (THE BLACK DAHLIA MURDER, WHITECHAPEL, ALL THAT REMAINS) handling production duties. The album’s cover artwork features a photograph by Dean Karr. The layout was done by Ryan Clark of Invisible Creature.

“Winter Kills” was made available in four configurations, including a deluxe digibook with CD (including two bonus tracks, “Shudder” and “Back Down To The Grave”) and live DVD (featuring 45 minutes of live raw DEVILDRIVER power — no studio overdubs at all, just the band at their best — and including fan favorites “Clouds Over California” and “The Wretched”), standard CD version, digital version and, for the first time in DEVILDRIVER history, a 2LP gatefold edition.

Check out this video of Mike Spreitzer talking with Backstage Entertainment which was recorded on November 13th at the Bourbon Theatre in Lincoln, Nebraska.

Tickets for the Dublin show are now on sale and can be purchased from Ticketmaster.ie. Sound Cellar and Into the Void.