Let’s just get to the point here. If you haven’t heard the new Diamond Head LP, “The Coffin Train”, then my friend, you are missing out on a molten, hot-slab of ‘classic’ meets ‘contemporary’ NWOBHM brillance! We caught up with vocalist Rasmus Andersen to talk about the new album and much more. All aboard ‘The Coffin Train’…

With a coat of new armour, but very much the same beating NWOBHM heart, Diamond Head have released their most adventurous studio opus to date.

The Coffin Train has it all. Soaring melodies, crunching guitars, carefully constructed arrangements that were designed to cause maximum damage, but in the same breath, loaded with sensitive, heartfelt emotion and intelligent songwriting.

So, what’s next for the band? With a series of dates on the horizon with old-school legends Saxon, it seems Diamond Head are set to set bridge the past with the future, lift the fog for the younger generation and serve up a box-fresh, rejuvenated shot in the arm for the somewhat ‘tired‘ view of the infamous NWOBHM sound.

OD – Okay, let’s just get straight into it. Firstly, let’s talk about the title of the new album ‘The Coffin Train’, what was the meaning/concept behind that?

RAS – The title actually came from a dream that I had when we were on tour in Canada. I think my subconscious was trying to deal with the current situation with the world and this lingering stress and doom, which I believe a lot of people in my generation are feeling at the moment.

I had this dream about an apocalyptic scenario where there was this old, rusty stream-train that just stuck with me when I woke up. It had giant, endless carriages of coffins with body-parts falling out all over the place, and it was racing away from the horizon, which was a huge orange mushroom cloud. It was from that vivid dream that the concept of the album came together.

OD – It will be 3 years this month since the self-titled album was released and your first with the band. I’m guessing that over those three years, the band has transformed considerably?

RAS – Yes totally. On both levels. One, for me personally, and the other, as a band. We’ve grown into a very different kind of beast now. I’ve been filming our shows since 2014, to present day and there is a massive difference in how we’ve all adapted to each other.

An example of that would be when Dean (Ashton, Bass) came on board and changed the feel and the sound of the band in a massively positive way. That just made us all a lot tighter as a unit, if you know what I mean. 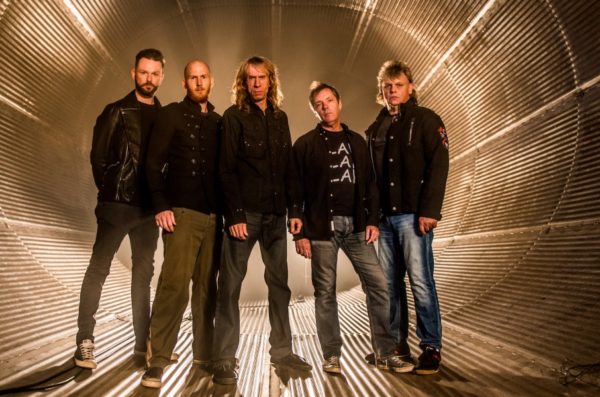 Obviously, for me, there has been a huge development. One part was getting into the back catalogue and then the first ‘self-titled’ album I did with them, that was a big stepping stone. All the while thinking; ‘will the fans accept me/like me?” or will they tell me to ‘Bugger off’!

So, yeah, it really was a bit of a journey and it gave us the tools we needed to move forward, try new things and move into a different state of mind with regards to writing/recording this new album.

OD – With regards to the lyrical standpoint of the album, can you talk us through the general premise of “ The Coffin Train” as I believe that Brian (Tatler) was more than happy for you to take the lead on this part of the creative process?

RAS – I wrote all the lyrics on the last album as I did on this LP, so it was a very personal process for me on both occasions, but bearing in mind that I had to stick to the ethos of what Diamond Head is, what their sound is and to respect their legacy.  So, there was a challenge of sticking to that but also putting my own mark on it.

The band were happy for me to produce the record and spearhead the whole direction of the albums sound and general layout, but with the collective understanding that we need to stick to the Diamond Head ‘brief‘ and deliver the very best we can.

OD – You have some live dates coming up with Saxon and you get to play the legendary Hammersmith Odeon (Hammersmith Apollo). With regards to venues, this one is pretty iconic. Do you get excited when you see venues like this come up on the tour dates?

RAS – Absolutely! It’s always a thrill to play such iconic venues, especially when knowing that some legendary artists have been on that very stage under the lights. There are a few venues, especially in London (because that’s where I live) on my bucket list, like the Camden Koko, The Roundhouse, Brixton Academy and of course Hammersmith Odeon.

So, yes, Hammersmith is one that I’m really looking forward to and it’s gonna be an epic show also thanks to the line-up (Saxon, Krokus, Girlschool). 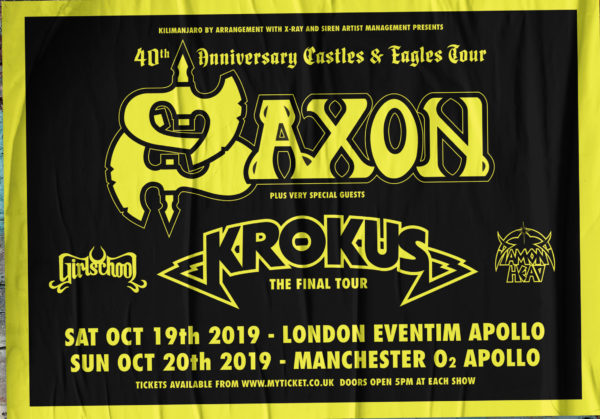 OD – The was released on May 24th via your new home, Silver lining Music. Do you feel that things are on a much more stable setting now rather than the ‘self-titled’ album, because when you think about it, that was the return from hibernation from eight years, so I’m sure there was a lot to prove?

RAS – It does feel like we have a huge amount of support behind us now and that’s a very reassuring feeling, especially in this business. Silver Lining has been great for us so far. I get the sense that they really care about what they do and it certainly shows. There is a tremendous feeling of goodwill and positivity right now, which is infectious and gives us a great confident feeling going forward with this new album.

This is exactly what I want from a label and I’m just very excited to get out on the road and start promoting this new LP.

OD – With reference to anything artistic or creative, I’m a big believer in appreciating things for what they are rather than clinging to memories of the past. Diamond Head are a band that no doubt were pioneers in NWOBHM and of course the reference to certain bands covering the music etc. My question is do you get tired of the media asking you the same stuff over and over again about this instead of focusing on the new material?

RAS – It doesn’t really bother me to be honest. Perhaps Brian would have a different opinion (Laughs). Brian’s thoughts on Metallica covering Diamond Head can be found in abundance on the internet and I’m sure he’s more than happy to continue answering those questions as they are put to him, but for me, I really don’t mind at all.

Metallica in a way has helped in keeping Diamond Head’s music alive to some degree and no doubt introduced a younger generation to the band’s music; which is only a great thing in my opinion.

OD – I feel that Diamond Head are one of the few bands that have found a very delicate balance with the classic NWOBHM but all the while adapting to a more present-day approach to the sound of the music, there are plenty of bands that find it hard to keep such a balance and more than likely tend to either get stuck in the past or discard their roots and opt for a new sound. Was this a conscious decision for the band, as I’m aware you had a ‘Brief’ when recording this album?

RAS – Well, because I came into Diamond Head with a set of new perspectives, I had to do a lot of homework first. I went through every bit of the bands back catalogue and really tried to understand ‘what is Diamond Head? where was the success in the past? and that point when they really found their unique sound. The ‘brief‘ was to stay as close to the original roots of the bands sound as best we can; all the while moving forward and creating new and exciting music.

OD – As a vocalist, you are influenced by many wonderful artists, but I know that the late Chris Cornell was someone very special to you. Do you find that vocalist of that level are becoming few and far between?

RAS – I think it’s very hard, in general, these days because the market as a whole is totally flooded with so many different artists that it’s actually quite hard to pinpoint the real talent. There was a guy we saw in 2016 at a Festival in France and the band was called The Electic Alley. That vocalist has serious pipes. You have to check them out.

But yeah, I think these days it’s hard to find the talented people because there is just too much content out there and it gets lost. When I see new artists I tend to look for energy more than range. The voltage and movement of the vocalist is what I really look for. There are a lot of people that can hit the high range vocals but it’s the swagger, attitude and movement that really gets my attention.

OD – I’m sure 2019 will see Diamond Head perform around the globe but if you could play anywhere, where would that be and why?

RAS – It’s all in the works at the moment, so at the moment it’s a bit early to talk about it. We are doing a few festivals which I’m really excited about including Hellfest which will be one of our first festival appearances of 2019, so that’s gonna be incredible. 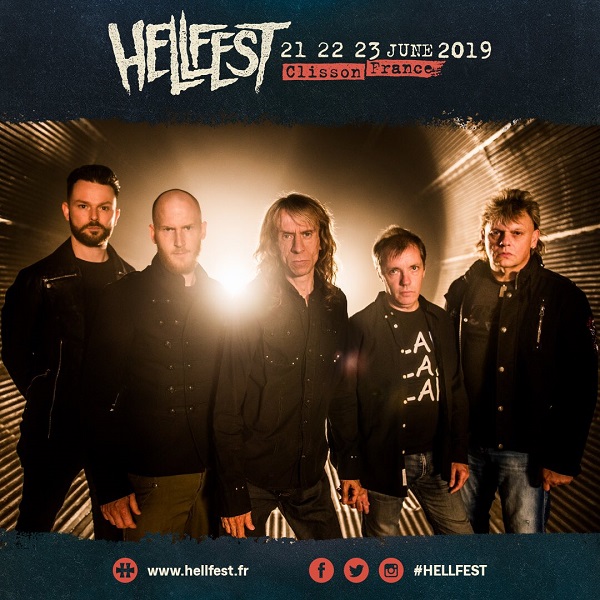 We want to get out there and play as many shows as possible so I’m sure there will be a few tours that will be happening that we can eventually share as soon as management have locked everything in place. Watch this space…

Diamond Head ‘The Coffin Trail‘ is out now. Get your copy here. 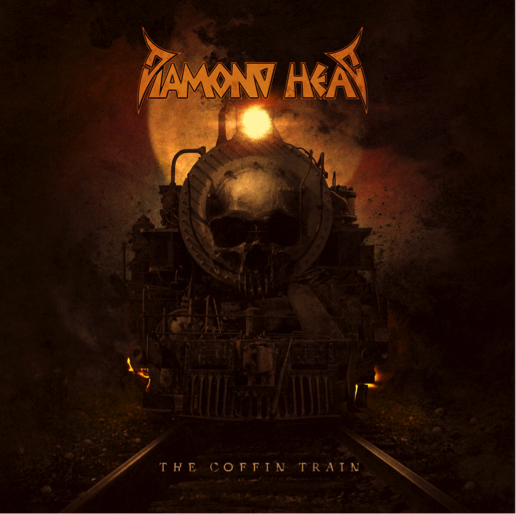