Irish alt rock legends KERBDOG will return to Dublin’s The Academy on Friday 14th November for an exclusive Irish show. 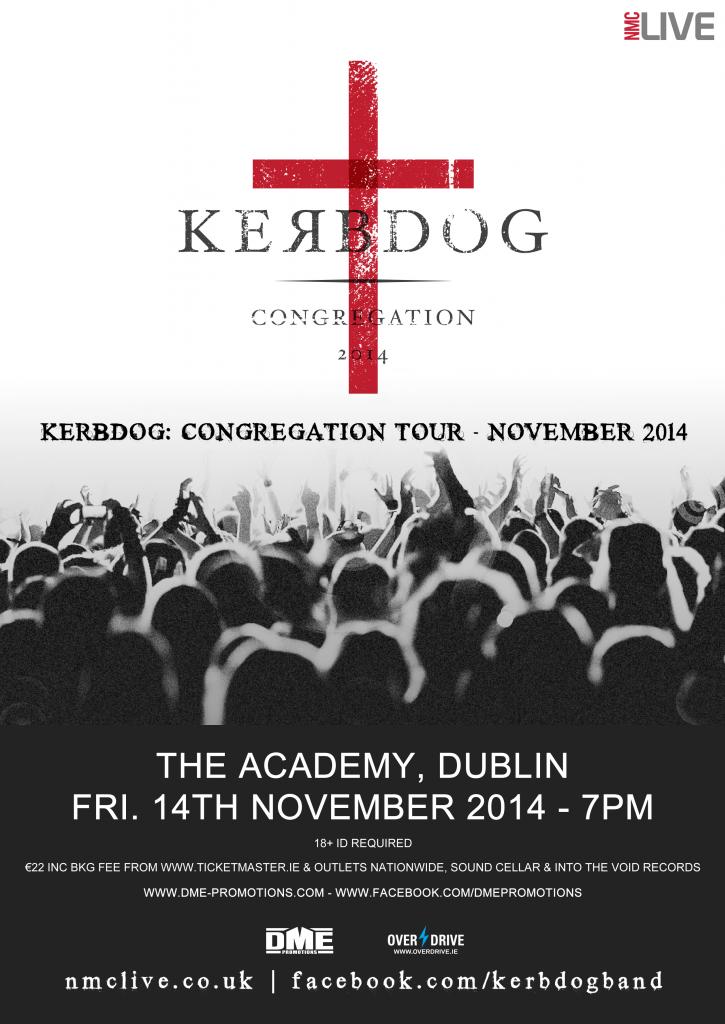 This is part of a short tour in support of their forthcoming ‘Congregation’ live album which will also include the band’s first new recording since the 1990’s. Expect all the classics from the band’s self titles and ‘On The Turn’ albums.

Originally named ‘Rollercoaster’, Kerbdog was formed in 1991 by Cormac Battle (vocals/guitar), Colin Fennelly (bass guitar) and Darragh Butler (drums) while attending Kieran’s College secondary level school. The band went on to obtain their Leaving Certificates, but they devoted their energies to music rather than studies. Their early live shows primarily consisted of cover versions of songs by Sonic Youth, Loop, Spaceman 3 and Fudge Tunnel. Rollercoaster spent a year in London, but they failed to win much interest from the UK music press and returned to Kilkenny.

Billy Dalton joined the band in early 1992 as a second guitarist and his fondness for heavy metal acts Metallica and Slayer complimented Battle’s fascination with the British and New York underground. The songs that resulted from the disparate influences of the band’s primary members were visceral and cerebral. Realising that they had a potential for success with the band, Cormac, Colin, and Darragh dropped out of college and Billy left his job as a truck driver with his family’s prosperous milling company

The group changed their name to Kerbdog in honour of a Californian BMX team that they were “obsessed with”. “We were really into BMX as kids and those guys were our heroes” Darragh Butler – Kilkenny People newspaper, 2010 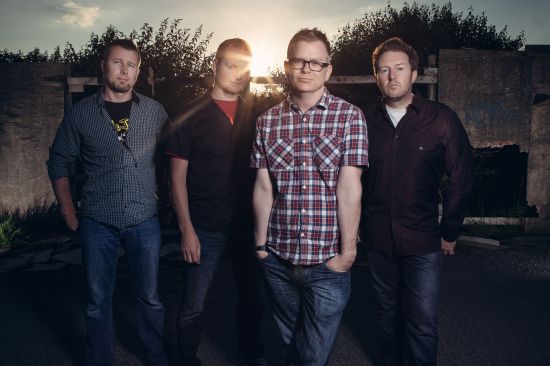 After supporting Therapy? in Kilkenny’s New Park Inn (since demolished) in February 1992, the band suggested that Kerbdog record and send off a demo to the record companies. The foursome recorded their first demo in Dublin that Summer (two songs of which later appeared as b-sides on their debut Vertigo Records single “Earthworks”). A second demo was recorded in December and yielded the version of “Earthworks” that became the aforementioned single:

“We weren’t expecting to hear anything from anyone, but we had 22 labels get back to us. It was just insane. We had to split them into two days, so we met 11 sets of record company executives a day in the Pumphouse. We were just kids and there they were pulling up in their limos to meet us” Darragh Butler – Kilkenny People newspaper, 2010

In early 1993, Kerbdog signed with Mercury Records subsidiary Vertigo Records. That summer, Kerbdog recorded their self-titled debut album at Rockfield Studios in Wales, during which time Sepultura were also there recording their 1993 album Chaos A.D.. The album was produced by Jack Endino, who helped cement the Seattle grunge sound along with sub pop. Whilst recording, Kerbdog were also planning a major tour of the British clubs. A winter support slot on The Almighty’s UK tour brought added exposure, promoted by second single, “End Of Green”.

1994 saw another run of gigs, including a support slot with Therapy?. The debut album was released that year to acclaim, and two further singles were released, “Dry Riser” and “Dummy Crusher”. The latter charted in the Top 40 of the UK Singles Chart and was shown in the chart listed on BBC Television’s Top of the Pops.

In early 1996, the Mercury Music Group was bought over by PolyGram Records, and Kerbdog shifted to Fontana Records, Vertigo’s sister label at PolyGram. That spring, the band returned to the recording studio to work on their second album. Produced by GGGarth, On The Turn was recorded in Los Angeles.

“We did one record with a band named Kerbdog, and we started off with about 25 cabinets and amps. It took about two days just to go through ’em all, but we got the best sounds that we have ever gotten. We used old Les Pauls, old Strats and Teles, different strings, different pickups.” GGGarth

Billy Dalton left Kerbdog a few months after the band returned from Los Angeles. JJ’s Song was released as a limited edition EP, preceding the “Sally” single in September 1996. In late 1996, the band recorded a session for Dave Fanning’s show on 2FM RTÉ radio. Tracks recorded were “Sally”, “Hard To Live”, “Mexican Wave” and “Secure”. Music magazines such as Kerrang! and Metal Hammer praised both Kerbdog’s albums and featured them frequently, Kerrang! ‘s editor spent a weekend with the band in Kilkenny.

The album was repeatedly delayed before being released in the UK in March 1997. It sold poorly, their record label dropped the band, and their back catalog was deleted in 1997. The band soldiered on without a record label for about a year, but eventually disbanded and played their final gig at the Mean Fiddler, in Temple Bar, Dublin on 7 March 1998.

In 1998 Cormac and Darragh with a new bassist Mick Murphy, went on to form another band, Wilt. They played their first gig at The Funnel in Dublin on 26 March 1998. Their music was used as background on EastEnders on the BBC. However, after two albums (Bastinado and My Medicine),[7] Wilt broke up in 2002/2003. Rock Sound magazine tipped them as being Ireland’s version of Husker Du and Weezer.

Following Wilt’s split, Kerbdog reformed in 2005. They played several gigs in Ireland that year, most notably two sell-out concerts in February at the Temple Bar Music Centre, Dublin, followed by a set at the Oxegen music festival in July. Kerbdog have continued to play occasional one-off shows, such as at the Camden Barfly in London in August 2008 as part of the Kerrang ‘Week of Rock’. Kerbdog also played at the Pumpalooza in Kilkenny, in August 2008 in aid of the Susie Long Hospice Foundation. Dalton rejoined them on stage for seven songs during the Pumpalooza gig, marking the first time since 1996 that the four piece had played together.

A tribute album entitled Pledge : A Tribute To Kerbdog was released on 8 March 2010, via the Dervy based record label Stressed Sumo Records. 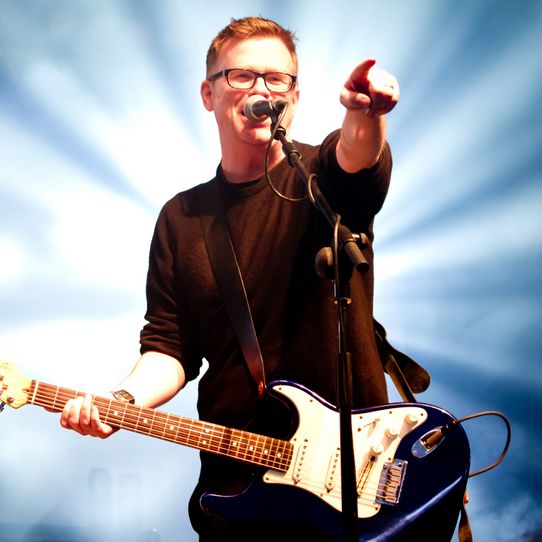 Kerbdog played the Temple House Festival in Sligo on the 11th June 2011,also playing a gig at the Set Theater in Kilkenny on New Year’s Eve 2011,at which ‘Wilt’ reformed for a few songs on the same night/stage. On April 7, 2012 they returned to the UK to play a one-off gig in Bristol, with Souls (Butler and Dalton’s new band) on the same bill, to mark the 15th anniversary of the release of ‘On The Turn’.

In late 2012, Kerbdog recorded their Dublin, London and Bristol shows for use on a future live album. Recorded and mixed by Dave Draper, “Congregation” will be released in October 2014 as a CD/DVD package. The first date announced to compliment this was an appearance at the Sonisphere festival at Knebworth on 6 July 2014.

On 16 June 2014 it was announced that guitarist Billy Dalton had re-joined Kerbdog after an 18 year absence. The group also announced that they would enter a recording studio in Evesham, the day prior to Sonisphere, to record a track entitled “Soaking Wet” which was demo’d originally in 1997. This marks the first time the band has recorded studio material since the 1990’s. The track will be included on the new live album. A colour 7” vinyl featuring “Pointless (live)” and “Soaking Wet” will be made available. A Pledge campaign was unveiled on 23 June 2014 to help fund and promote the new releases.

For tickets to see Kerbdog hit this link.